Make Your Mind an Ocean

This introductory booklet covers the general topic of the mind through public talks, lunchtime lectures at two universities, and an evening lecture given to the general public. It is published in conjunction with Becoming Your Own Therapist.

See the Related Links for Chapter Four to access the audio recording and read along with the unedited transcript for that teaching. 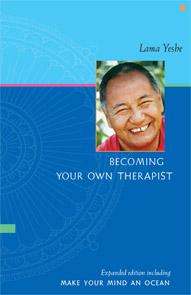 The talks in this section are on the general topic of the mind and were given during Lama Yeshe’s and Lama Zopa Rinpoche’s second world tour, in 1975. I had the great honor of accompanying the Lamas on this tour and was present at all these discourses. Most of the people who attended were new to Buddhism and had never seen a Tibetan lama before, a situation quite different from what we find today. As ever, Lama’s timeless wisdom shines through, and his teachings are as relevant today as they were back then.

Of greatest interest, perhaps, is “A Buddhist Approach to Mental Illness.” Here Lama met with a group of psychiatrists at Prince Henry’s Hospital, which was at that time a teaching hospital connected with Monash University Medical School. Prior to that it had been affiliated with Melbourne University, and Prince Henry’s was where I studied my clinical medicine and worked for several years after graduation. Thus, several of the psychiatrists with whom Lama met that afternoon were former teachers and colleagues of mine, and apart from anything else, I was interested to observe their reaction to my outer transformation (I was in monk’s robes at the time). The hospital was demolished a few years ago; the last time I drove by it was but a hole in the ground, a symbol of how much has changed since those halcyon days. Anyway, these doctors were delighted to meet and question Lama, and this historic exchange underscores the difference between Western and Buddhist concepts of mental health.

I would like to thank Rand Engel, Victoria Fremont, Christina Russo and Wendy Cook for their excellent editorial input, which greatly improved the way these teachings read.

Chapter One: Your Mind is Your Religion »