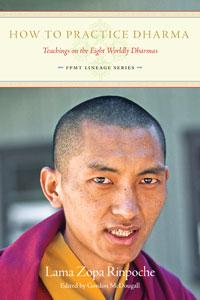 The FPMT Lineage series is the most extensive contemporary commentary on the path to enlightenment teachings available and comprises the essence of the FPMT's education program.

The first in this series was Rinpoche's fabulous Heart of the Path. We have now published the next book in the series, Rinpoche’s teachings on The Perfect Human Rebirth, and we are actively working on a book on impermanence and death. Please see our Membership page to become a LYWA Member, and have access to this book in digital format.

I would like to say a little about how the FPMT Lineage Series has come about.

My first Kopan course was the third, October-November, 1972. When we arrived we were given a text book, Lama Zopa Rinpoche’s The Wish-Fulfilling Golden Sun of the Mahayana Thought Training, and Rinpoche’s month-long teachings were essentially a commentary on this book. I took fairly sketchy notes but at the end of the course realized that the Golden Sun and Rinpoche’s teachings had changed my life. However, the book was pretty rough, so after the course I asked Rinpoche if I could edit it into better shape. He said that what we had been given was basically a compilation of the students’ notes from the previous course and that what he really wanted to do was to rewrite the whole thing from beginning to end and asked me if I would like to help him do that.

For six weeks my friend Yeshe Khadro and I spent several hours a day with Rinpoche as he painstakingly revised the entire book. In the evenings she would type up what we had written down and I would then try to edit the manuscript into publishable form. By the time the fourth course arrived in March 1973 the first official edition was ready and Rinpoche taught from that. This time I took better notes than the first time and Brian Beresford’s notes were even better than mine.

That summer a few of us went up to Lawudo and while I was there I edited Brian’s notes and mine into a commentary to the Golden Sun. In doing so I realized how much of Rinpoche’s precious teachings we had missed and determined to get more of them down next time. In those days we had no electricity or tape recorders at Kopan, so at the fifth Kopan course, November 1973, I plopped myself down right in front of Rinpoche’s throne and basically wrote down every word he said. My notes were a horrible scrawl and I made up abbreviations as I went along, and by the end of the course I’d filled several Indian notebooks with fairly illegible hieroglyphics. Miraculously, however, Yeshe Khadro could read it perfectly and dutifully typed it all up. I edited this as well and in early 1974 we printed two volumes of Meditation Course Notes, Rinpoche’s teachings on the Golden Sun from the third, fourth and fifth courses. Looking back, this was the beginning of not only the Lama Yeshe Wisdom Archive but Wisdom Publications as well.

By the time the sixth course arrived in March 1974 we had a primitive little Panasonic tape recorder and unreliable Indian batteries, but this just served as a backup to Sally Barraud, who took the whole course down in shorthand. She typed it up, I edited it, and back in the USA, Pam Cowan typed the stencils. In 1975 we published Meditation Course Notes, Volume 3. All this, and most of the subsequent Kopan courses are now available on the LYWA website, LamaYeshe.com.

Lama Yeshe and Lama Zopa Rinpoche started traveling the world in 1974 and their students began recording and transcribing their teachings wherever they went. By the time the Lamas got back to Kopan for the seventh course in November, we had electricity. Thus we began building up our collection of tape recordings and transcripts of our Lamas’ precious teachings. Between courses, I did more work with Rinpoche refining the Golden Sun. The last time we worked on it was during the Lamas’ world tour of 1975. Rinpoche stopped using it at Kopan in the late ’70s. The book as it then stood is also available on line.

Still, it was always my dream that one day we would publish a series of Rinpoche’s complete teachings on the lam-rim. At first I thought we would base it on the Golden Sun, but when in 1991 Liberation in the Palm of Your Hand was published, its excellent outline became the natural choice, not just because it was available but because Rinpoche based many of his teachings on that text. However, the idea languished as there was never enough money to support the transcribers and editors we needed to do the work.

In 1996, Rinpoche asked me to establish the LYWA as a stand-alone FPMT entity and the idea of a series of his commentaries on the main lamrim topics again became a possibility. After a couple of failed attempts to finance plans that would allow this to happen, in 2007 we came up with one that worked, thanks to an inexpressibly kind benefactor who offered us a $500,000 matching grant. That allowed us to hire the staff we needed to finally go ahead, especially Gordon McDougall, who has taken the lead publisher’s acknowledgments in combing through nearly four decades of Rinpoche’s teachings to compile his lam-rim commentaries, building on the previous “basketing” work done by Ven Trisha Donnelly and Tenzin Namdrol (Miranda Adams). He describes the process in his preface. You can see details of our “Publishing the FPMT Lineage” program on the LYWA website under “Current Projects.”

In retrospect, the masterpiece Heart of the Path, Ven. Ailsa Cameron’s wonderful editing of Rinpoche’s guru devotion teachings published in 2009, can be seen as the first in this series. This book—Rinpoche’s teachings on the eight worldly dharmas, a topic that doesn’t actually fall into any classical lam-rim outline—is the second. It is to be followed by books on the perfect human rebirth, impermanence and death, the three lower realms, refuge, karma and beyond. The dream is a reality.

In our previous books and on our website we have mentioned in detail all the people who have made the Archive possible and continue to do so, so I won’t repeat all that here. I would, however, like to thank those who directly supported the editing and printing of How to Practice Dharma—the Hao Ran Foundation, Taiwan, and Edwin Lau and Tan Cheng Guan of Singapore—our kind Publishing the FPMT Lineage benefactor again, and all the people who have made matching grants to this program. We still have a ways to go to match the entire grant, so if you would like to support the preparation of more of Lama Zopa Rinpoche’s peerless lam-rim commentaries, please do so at LamaYeshe.com. Thank you so much.

"Thank you! My copy of Lama Zopa Rinpoche's book, How to Practice Dharma, arrived at my office address yesterday. It is simply beautiful—from the gorgeous photograph of Rinpoche that graces the cover to the stellar glossary in the back!  A real triumph!!

"I can hear Lama Zopa's early discourses at Kopan: 'If you mix Dharma with worldly dharma, then it is not Dharma.'  How wonderful to have this precious teaching—to hold in one's hands and to take to heart. Thank you and  LYWA for your great work!"

From a letter written by a student to Lama Zopa Rinpoche:

I had read about the eight worldly dharmas before, numerous times, but it never really impacted on me like it did while reading your book. I wept and wept with the knowledge that after all these years of trying to learn the Dharma and thinking that I was making some progress practicing Dharma, in reality, I have never really practiced Dharma without the eight worldly dharmas controlling me. That awareness makes me cry now while writing to you. So much time has been wasted.

I scotch-taped notes on my computer, phone, water jug, food pantry—and while I am writing to you, I am thinking of other ideas to place the post-its—with the word ‘motivation’ to remind me to check my ‘true motivation.’ I have written on a note card a prayer from your book that I say before I drive my car, before I read my holy Dharma books and before I begin my morning practice and night practice. I am eternally grateful for you taking the time to write that book, for without it, I would have continued doing what I have always done, and wasted my entire life unknowingly.

You can read Rinpoche's reply to this student's letter here.

How to Practice Dharma: Editor's Preface »