The Wish-Fulfilling Golden Sun of the Mahayana Thought Training

This book gives an overview of the Mahayana Buddhist path to enlightenment and outlines essential meditations and daily practices. The text was compiled from students’ notes from the second Kopan meditation course, March 1972, and first published for the third Kopan course in the fall of 1972. Over the next two-and-a-half years this version was revised several times by Lama Zopa Rinpoche and Nicholas Ribush for the various Kopan courses held during that period. An edition of the 1975 final edit was published by FPMT in 2016 and is available for download as a free PDF. 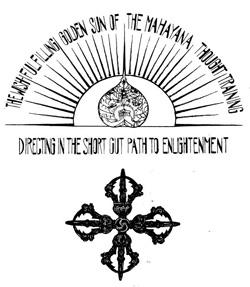 This book has not been written because there is some new Dharma that was not shown by Guru Shakyamuni. And because of my limited-experience realizations, in no way have I deserved to write such a book, and there is scant hope that it can benefit others.

But in view of the remarkable fact that in this time, already beyond the period of the five degenerations and an age in which there is the great danger of atomic explosion, an increasing number of Westerners are finding the Buddhadharma as they seek like blind men opening their eye, and as it is extremely important to make meaningful this once received Wisdom Eye, which analyses all dharmas, clearly discriminating between what to avoid and what to practice, my depthlessly kind venerable Guru, Thubten Yeshe, has given the Vajra instruction that it is necessary to write a book such as this in English. So it is with happiness, devotion and respectfulness that I do so, writing a condensed meditation book which shows the form of daily practice, thinking that if it becomes an offering to the Gurus it is the best cause to make the mind one with the Dharma.

Should there be any benefits from this authorship may they bring the success of the Guru’s sublime consideration, cause the Golden Sun of Guru Shakyamuni’s Mahayana Teachings to shine permanently and result in the instantaneous Enlightenment of all sentient beings. The most kind, compassionate Guru Shakyamuni made charity of his body to sentient beings more numerous than atoms of the universe for the sole purpose of their Enlightenment, and so may this little work quickly bring the same result.

If there are any mistakes in this book, may they be confessed in the eyes of the Holy Beings.

Students at the second Kopan meditation course (March 1972) compiled their notes of Lama Zopa Rinpoche’s teachings into a textbook for the third course (October 1972). It was entitled The Wish-Fulfilling Golden Sun of the Mahayana Thought Training: Directing in the Short Cut Path to Enlightenment. During the third course (my first), Rinpoche would read a sentence or two from the Golden Sun and then comment upon it, briefly or at length. This is pretty much how Rinpoche taught those first few courses.

After that course I mentioned to Rinpoche that it was an amazing book but could perhaps do with a bit of an edit. Rinpoche said that’s what he’d been thinking, so for about six weeks before the fourth course (March 1973), Yeshe Khadro and I met with him daily for several hours while he revised the whole thing from beginning to end. We would write down what Rinpoche said, YK would type it up in the evenings and I would edit that.

The original went in some detail up to the end of the path of the middle capable being and concluded with an equilibrium meditation, some techniques for developing bodhicitta, including an extensive tong len meditation, and a very short meditation on emptiness. For the first revised edition all this was expanded and refined, and a section on developing concentration taken from His Holiness the Dalai Lama’s Opening of the Wisdom Eye (a new translation is entitled Opening the Eye of New Awareness) was added. Over the next couple of years Rinpoche and I did a bit more editorial tweaking before subsequent courses, the main change being the addition of a substantial section on bodhicitta and the first four perfections. The last time we worked on the book was in May 1975 at Chenrezig Institute. It still lacked a section on emptiness. But Rinpoche did not use the Golden Sun as the basis of the eighth (November 1975) or any future course, so the last time he did use it was at the seventh (November 1974).

In 1982, after the first Enlightened Experience Celebration, just before Lama Yeshe left Tushita Meditation Centre to visit Tibet, he said to Rinpoche in my presence, “While I’m gone I want you and Dr. Nick to finish work on the Golden Sun.” The first time I met with Rinpoche to begin this task he said he wanted to scrap the old version and do a new one based on the twelve deeds of the Buddha, so we started from the beginning on that.

After a couple of months’ slow progress Rinpoche finished the retreat he was doing and decided to go to Kopan. I went with him to continue our work, but when we tried to pick up where we had left off Rinpoche said he’d decided against that approach and instead wanted the new version to follow the outline of the Essential Nectar, a lam-rim text. So we started over once more and by the time of the fifteenth course (November 1982) we had gotten some way through the guru devotion section. But then I had to go back to New Delhi to help organize Tushita Mahayana Meditation Centre’s second Dharma Celebration with His Holiness, so I handed the Golden Sun job over to another student. Rinpoche did a couple of months’ more work with him but then he had to leave too. And as far as I know no more work on the Golden Sun has been done. However, Rinpoche’s commentary on guru devotion from the Essential Nectar did make it into The Heart of the Path, his extensive teachings on how to follow the guru.

So, the book in your hands, dear reader, is the very inexpertly edited edition from 1975, created with the extremely limited understanding of publishing and its conventions we had back then. But still, it has changed the lives of hundreds of previous students and because of the many blessings it contains it may continue to do so.

WFGS: Introduction »
+ View all Teachings on this topic
+ View All Teachings