In 1975, Lama Yeshe undertook his most extensive international teaching tour, being on the road for nearly nine months. This book contains the teachings and meditations Lama gave at a five-day retreat he led near Melbourne, Australia, in March 1975. In line with Lama’s intentions, this book is dedicated to the awakening of inner freedom within the minds of its readers and all other sentient beings. 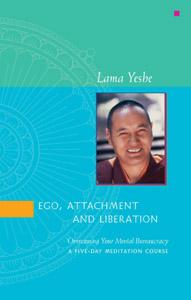 Our previous free Lama Yeshe books, Becoming Your Own Therapist, Make Your Mind an Ocean and The Peaceful Stillness of the Silent Mind, contain public talks Lama gave in Australia and New Zealand in 1975 on his and Lama Zopa Rinpoche’s second world tour. I was fortunate enough to be their roadie and teaching assistant on that wonderful voyage and more than thirty years later, the memory still resonates strongly in my mind.

As well as giving his many public talks, Lama also led a five-day meditation course for about one hundred students at Dromana, near Melbourne.* This book contains his teachings and meditations from that event and, as its title suggests, Lama’s focus was on the shortcomings of ego and attachment—the main causes of all our suffering and problems—and how to overcome them.

As the lamas always tell us, the way to use Dharma teachings is as a mirror for the mind, and during this course—especially during the first couple of days’ teachings, which were not specifically labeled meditation sessions—he would pause to give us time to reflect on what he had just said; to contemplate its meaning and see if we could recognize ourselves in it. These breaks are indicated in the hope that you, dear reader, will also pause for a moment to think about what Lama has just told you. For that’s another way to listen to teachings—to take them as personal advice and to apply to yourself what you’ve just heard or read.

In his opening address, Lama indicates his intention by saying, “If over the next five days you can begin to recognize the reality of your own nature, this meditation course will have been worthwhile. Therefore, dedicate your actions during this time to discovering inner freedom through recognizing the negative characteristics of your own uncontrolled mind.”

This is also our hope in publishing this book and bringing it to you.

I thank Jennifer Barlow and Wendy Cook for their kind editorial suggestions.

Chapter One: Making Space for Wisdom »