In Lama Yeshe’s and Lama Zopa Rinpoche’s first trip to Europe in 1975 they offered a seminar based on their Kopan meditation courses. Preceded by Lama Yeshe’s lecture on meditation, these teachings encompass the entire Buddhist path to enlightenment. 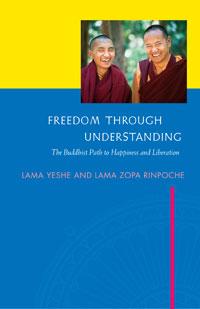 The teachings in this book are typical of the incredibly inspiring teachings that Lama Yeshe and Lama Zopa Rinpoche were giving together at the time. They are what inspired many of their students, like me, to drop whatever we were doing and devote ourselves to following the Lamas full time. When Rinpoche said, "Each of us needs to think like this: 'All sentient beings have been extremely kind to me in the past, they're kind to me in the present, and they will continuously be kind to me in the future. They are the field from which I receive all my pleasure—past, present and future; all my perfections come from other sentient beings. Therefore I must attain enlightenment. Seeking everlasting happiness for myself alone, not caring about other sentient beings, giving them up, having no concern for their welfare, is selfish. Therefore, I must attain enlightenment, the most sublime happiness, in order to release all sentient beings from suffering and lead them on the path to enlightenment by myself alone, as this is my responsibility,'" we felt, "Yes, that's what I must do," and devoted our lives to the Dharma.

The Lamas started teaching Buddhism to Westerners in the late 1960's. The first full meditation course was held at Kopan Monastery, Nepal, in 1971. After the sixth Kopan course, March 1974, upon the invitation of their students, the Lamas made their first trip to the West. They went again the following year and every year after that until Lama Yeshe passed away in 1984.The teachings in this book are the first the Lamas ever gave in Europe—a September 1975 weekend seminar near London that reflected the style of the Kopan courses. As their roadie and teaching assistant on that 1975 voyage, I was fortunate enough to be at this seminar and again observe the profound effect the Lamas' teachings had on people, especially those meeting the Dharma for the first time.

As ever, the Lamas stressed the importance of compassion, in particular its ultimate expression in the highly developed mind of bodhicitta. Lama Yeshe said, "This weekend we are very fortunate in that we have the opportunity to cultivate bodhicitta and put the actions of our body, speech and mind into the path to liberation, the path of control. This is so worthwhile."

As well as giving profound teachings, the Lamas also led several meditations, which are included here. When reading this book, when you come to the meditations, pause for a few moments and think about what the Lamas are saying, as was their intention. In this way you will get much more out of the book than just reading it through and then moving on to something else.

But wait! There’s more! By some miracle, these teachings were videotaped and all the tapes but one have survived to this day. We have digitized the tapes and almost the entire the seminar will be available on DVD not too long after this book is published. This is by far the earliest video we have of the Lamas and it is a great joy to watch them as they were in 1975.

Since this seminar is so short you can get only a brief albeit sweet taste of Dharma by reading this book. In order to help you go deeper we have included a recommended reading list at the back of the book.

Also, since many of our other free books contain a glossary and there's an extensive one on line at www.LamaYeshe.com, we have not included one in this publication.

I hope this book helps you as much as it has helped me.