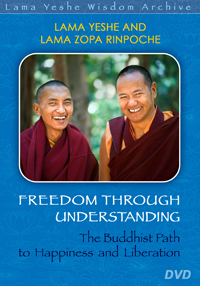 The Buddhist Path to Happiness and Liberation

Subtitles in English. Watch excerpts of this video on our YouTube channel.

"Buddhism isn't some fanatical religious trip. It's a philosophical way of living life. And also, to study Buddhism you don't need to believe in something extreme. It's a matter of investigating, examining and experimenting on yourself. It's not just belief. Without understanding, belief can be very dangerous. So what Lord Buddha emphasized was that understanding is the path to liberation, knowledge is the path to liberation." (Lama Thubten Yeshe)

"The practice of religion, spirituality or Dharma has to be a method that completely destroys all suffering, a method that brings about the complete cessation of suffering, and not just temporarily. That depends upon completely eradicating the root of all the billions of sufferings that exist—ignorance and all the other delusions that spring from the root of ignorance. True peace is received whenever we completely eradicate this root of suffering. In other words, cessation of ignorance, attachment and anger is real freedom, true peace—the peace that never changes; the peace that once received can never change, is everlasting." (Lama Zopa Rinpoche)

In Lama Yeshe’s and Lama Zopa Rinpoche’s first trip to Europe they offered a weekend seminar based on their famous month-long Kopan meditation courses. Preceded by Lama Yeshe’s lecture on meditation at Kensington Town Hall, these teachings at Royal Holloway College, Surrey, encompass the entire Buddhist path to enlightenment. The teachings on this DVD set can be found in the book also titled Freedom Through Understanding.