Thank you for subscribing to our monthly e-letter.

Reminder and Update
As most of you know, a couple of weeks ago we sent out a Special Announcement to let you know that we have created some beautiful portraits of Lama Yeshe suitable for altars, framing and so forth. These professionally restored photos are printed on museum-quality paper, and the result is truly outstanding. For more information, see our portrait information page.

Also, in our January e-letter we asked for your help to create the merit to help a friend sell her property, many of the proceeds of which would go to support Dharma projects, including the Lama Yeshe Wisdom Archive. Many of you agreed to follow Lama Zopa Rinpoche’s advice and recite the Akashagarbha mantra and/or write out the Sanghata Sutra to this end. Well, it seems to have worked! A buyer has been found and a contract negotiated. Our friend and all of us here thank you for your faith in Lama Zopa Rinpoche’s observations and dedication to helping the Dharma. Thank you so much. You can stop reciting the mantra (unless you want to keep doing it anyway!), but if you have started copying out the Sutra, please continue till it’s done.

Books and DVDs
Once more, our ever-popular Becoming Your Own Therapist / Make Your Mind an Ocean combined edition is running low and we’re going to reprint another 20,000 copies. People love that book! We’re seeking $15,000 to accomplish this project, so if you’d like to help, please let us know.

Our new Lama Yeshe DVD project, Anxiety in the Nuclear Age, is in production. We expect to have copies available in a couple of weeks. It contains two talks Lama gave in California in 1983…with nuclear tensions again running high, these teachings are as relevant today as when they were given. This subtitled DVD costs only $15 and a mere $7 for LYWA members. Although the DVD won't be ready to ship until April 13th, you can place your order now.

And work is already well advanced on our next DVD projects. One is a couple of 1982 interviews with Lama Yeshe, a bit of which we published in our August 2006 e-letter. In these interviews Lama talks about how he and Lama Zopa Rinpoche began teaching Westerners, the approach to teaching Dharma to Westerners, what is the essence of Buddhism, how to bring Dharma to the West, how the FPMT got going, how a center should develop and many other interesting topics along these lines.

The other DVD project is really exciting in that it was recorded in 1975 and you’ve never seen the Lamas look like this! Those of us who met the Lamas in the ’70s will be gripped with nostalgia; those who did not will have their minds blown! More on this later, but we do have a problem. There are gaps where the videotapes are changed and although we have complete transcripts, for some reason we do not have audio of Lama Zopa Rinpoche’s part of these teachings in the Archive. They were given at Royal Holloway College, near London, in September 1975. If by any chance anybody has audiotapes of these teachings, please let us know. Thank you so much. 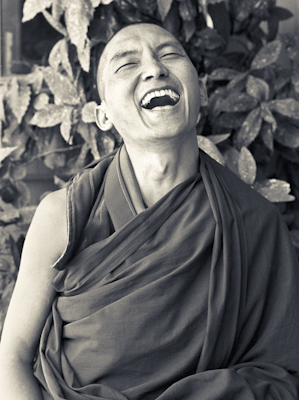 We have added to our Members' Area the transcripts of lectures given by Lama Zopa Rinpoche at the 17th Kopan Meditation Course in 1984. These lectures include extensive teachings on the Heart Sutra, selflessness, and dependent origination.

Also, we have now made available for public access Rinpoche's lectures from the 28th Kopan Meditation Course in 1995; you can access this through Rinpoche's Teachings page. The audio from these teachings are being posted to our Online Recordings page... see more information about this below.

This month's updates to Rinpoche's Online Advice Book include new advices in the Dharma Work section of the book. There's new advice for Center Directors, recommendations for how to handle conflicts among fellow students, and advice related to teaching Dharma.

We have made a number of updates to our Photo Gallery and added new sections with photos of Rinpoche, some of which were from the Lake Arrowhead course in 1975. In addition we've posted the group photo from this course, which is remarkably clear—if you attended this course, you are sure to be able to find youself in this photo!

If you'd like to see more photos of Lama Zopa Rinpoche, be sure to visit the FPMT's Photo Gallery as well.

Additions to Our Online Recordings Page
We've posted the audio of another of Lama Zopa Rinpoche's lectures from the 28th Kopan Meditation Course in 1995. This one includes the oral transmission of Kyabje Pabongka Rinpoche's Heart-Spoon prayer. The transcripts to these teachings have just been posted to Lama Zopa Rinpoches teachings page, too, so you can read along as you listen.

This month's podcast is the 2nd chapter from our newest book of Lama Yeshe's teachings, Ego, Attachment and Liberation. You can read along with the unedited transcript of this teaching, too. Listen to this recording—and all of the recordings we've released as podcasts—on our Online Recordings page.

Final Notes
Our friends at Langri Tangpa Centre have put up a great page of Lama Zopa Rinpoche stories. Check them out!

Thank you again for your kind interest in and support of the Lama Yeshe Wisdom Archive. As ever, we’re happy to leave you with a teaching you would not have seen before. This one is from the 1975 London course that we are bringing out on DVD, as mentioned above. 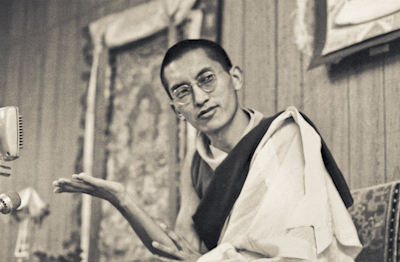 The Causes of Happiness and Suffering Lie Within

Earth’s original human inhabitants did not have minds as negative and cruel as those of today. As a result, their actions of speech and body were not as violent and harmful as those of the people we see around us now, and life was much more peaceful in those far gone days. But gradually, as their delusions of anger, attachment, pride and jealousy arose more frequently and strongly, the actions of the early humans’ speech and body became more violent and harmful. And now, irrespective of how much material progress the world has made, life has become busier and more dangerous.

The main cause of the problems we experience does not lie in the external environment, however; the main cause of suffering is the unhealthy, dissatisfied mind. That’s why external development has not brought real, true peace. On the contrary, it seems that the more things have developed externally, the more danger has been brought to our lives, our people and our countries. All this arises mainly as a result of internal factors: the dissatisfied mind, attachment and hatred.

So, even though external development proceeds apace in the hope of happiness, it’s all based on the wrong conception that happiness comes from external things. It does not; happiness arises only from inner factors, the mind.

Look at people who have every material thing their heart desires—food, clothing, fancy apartment, everything: they’re still not happy; they still get depressed; they’re still not satisfied. And because they don’t understand the meaning of the human life and think that there’s nothing left to enjoy, they kill themselves. Such life problems arise from the mind, the inner factor of attachment. Instead of bringing satisfaction and happiness, all their desirable material possessions simply lead to more dissatisfaction.

Sometimes it seems that our personal, everyday sufferings seem to be caused by other people—our family members, enemies, other people in the country and so forth—but even if we killed every other living being on earth and were here alone, we’d still have neither peace nor happiness.

The cessation of suffering and the experience of happiness do not depend on making all other beings on earth non-existent, and the fact that doing so would not bring peace or happiness to the last person left proves that this would be an extremely mistaken way of seeking happiness. That person would feel very lonely and unhappy. Problems arise from within, from inner, mental factors such as attachment.

Also, we all know that when we acquire an object or a friend that we desire, we eventually lose interest and look for something new. This sort of problem also arises from within, from the dissatisfied mind and attachment.

And even after a person’s physical body has become non-existent and disappeared, still that person’s suffering has not ended; his or her mind still exists—just because the body finishes doesn’t mean the mind does. And as long as that mind is under the control of the three poisonous delusions of ignorance, attachment and aversion, it’s not free of suffering. In fact, those delusions are the worst of all suffering, the root of every problem experienced by all beings everywhere. Just as a tree without a root can have no branches, leaves or fruit, similarly, a sentient being free of root delusions can experience none of the sufferings of sickness, aging, death and so forth.

This is the beginning of the first teaching Lama Zopa Rinpoche ever gave in Europe. Edited from the Lama Yeshe Wisdom Archive by Nicholas Ribush.