Welcome to our first e-letter of 2008. We hope that this year will be a happy, prosperous and enlightening one for you, your family and friends. If there’s ever anything we can do for you, please ask.

Latest News on our New Books
The three books I’ve been talking about these past few months really are now being printed and will be shipped to Members and Benefactors appropriately. Remember, benefactors automatically receive all our free books; members automatically receive all our books, including those for sale and those by Lama Yeshe and Lama Zopa Rinpoche published by Wisdom Publications. There's still time to become a member or benefactor before the books are sent out; see our Donations page for more information.

We’re giving our members a sneak preview of Lama Yeshe’s Universal Love, The Yoga Method of Buddha Maitreya by posting it in the members' area of the website. The book itself, which will retail for US$15, will be mailed to all members next month, along with the free books, Lama Zopa Rinpoche’s How Things Exist [cover shown here] and the reprint of Making Life Meaningful. Non-members will be able to purchase Universal Love direct from our website at the discounted price of $10.

And now we’re moving ahead with some of our other projects, in particular a couple of weekend seminars conducted by Lama Yeshe and Lama Zopa Rinpoche in the UK and Switzerland in 1975 and 1983 respectively. Both these will come out in DVDs and book format—more news on both these projects as the year progresses. An excerpt from the 1975 event constitutes this month’s previously unpublished teaching. We also have several other book projects in the pipeline and will let you know more about them in due course as well.

Help for a Friend: A Request from Lama Zopa Rinpoche
Last week we received this message from the FPMT about one of our colleagues who was recently seriously injured in car crash. I have known Ecie since she and her husband William came to Kopan for the Fourth Meditation Course, March 1973. The next year they hosted Lama Yeshe in New Zealand and founded Dorje Chang Institute in Auckland. Since that time Ecie has worked for the FPMT and therefore has a very strong connection with many of us. William has built many stupas in New Zealand and runs the Stupa Information Page. It would be great to help them in their time of need. William has set up a no-holds-barred website to report Ecie’s progress.

Here’s the message. If you would like to help, please recite the Diamond (Vajra) Cutter Sutra with the specific dedication below as many times as you can. It takes about a half hour. If you recite it out loud, any people or animals that hear it are also blessed. Please let me know how many you do; perhaps we can reach our goal of 110. Thank you so much.

As some of you will already know, Ecie Hursthouse, who is the founding director of Amitabha Hospice Service in New Zealand and a very devoted student of Rinpoche’s for many years, was recently in a very bad car accident and is in hospital.

Rinpoche says this is the time when the FPMT organization must help Ecie, who has been working for the organization for so many years.

The specific dedication is:

Thank you for your kindness in making prayers for Ecie.

The Diamond Cutter Sutra is downloadable in various languages from the FPMT website.

Thank you so much for your kind interest in and support of the Lama Yeshe Wisdom Archive. We are only able to spread the Dharma for the benefit of all sentient beings through your kindness and generosity. 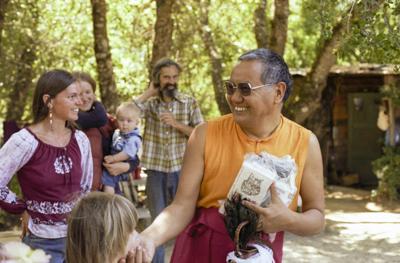 So you can understand how attachment is the biggest problem in the world. “My religion is good, therefore I’m going to kill you.” That’s ridiculous. People who think like that are simply destroying themselves.

If I were to do that I’d be turning religion into poison. What I was doing would have nothing to do with religion. But even though my actions were the opposite of religion, I’d be thinking, “My religion is good.” Instead of being medicine to solve my psychological problems, because of my distorted mental attitude, my religion would be poison. Even though I’m thinking “This is my religion,” not a minute of my actions would be religious.

The Bible says the same thing. The Bible contains wonderful teachings by Jesus but many people don’t understand what they mean. For example, he said that people who worship idols are not following him. That’s very true; that’s a fantastic teaching. We have to understand how to integrate religion with our everyday life, put it into action and solve our problems, not think that material things like church and property are religion. That’s ridiculous.

In other words, people who worship idols thinking that the materials atoms are their religion and don’t realize the nature of their own consciousness or spirit have no idea of what religion really is. Jesus gave perfect teachings explaining this; we just don’t realize.

So, attachment and ignorance produce many misconceptions in our life. How? For example, we often think, “This is good; this makes me happy,” but if we investigate a little further we’ll find that such thoughts are misconceptions, that things we think make us happy actually cause suffering.

Evel Knievel is a good example of this*. He believes his death-defying, daredevil stunts are pleasure. Even when he nearly kills himself, after he recovers, even though he’s decided to quit, his ego and attachment tell him, “This is your profession, your job; you have to do it again.” So he does and nearly kills himself again. Why does he put himself through all this?

Well, we ourselves do the same thing. I mean, in one way what we do is completely different but from another point of view it’s exactly the same. Why? Through misconception. We do things that bring us suffering but we cling to them as wonderful causes of happiness. Check up on the things you do, physically and mentally—you’ll see that what I’m saying is true.

Perhaps it will be clearer if I give an example from our own experience. We’re always attached to food, aren’t we? As a result, we eat with greed and our stomach is often upset. This comes from attachment; it’s common.

Actually, people think that food should preserve body and life, but eating with ignorance turns nourishment into poison and kills us. Everybody knows this; check up. Why do most people die? It’s because they eat things that finish up killing them. If you really look into it you’ll always find that the person made some mistake or other.

What I’m saying is simple but you have to realize it more deeply; it’s not just an idea. If the meditation you do is just an idea, if you’re simply on some kind of trip, then it’s not worthwhile. Proper meditation scientifically demonstrates the reality of your nature, your relative nature. This is well worthwhile knowing. When you know the nature of your own mind, how your mind torments you, how it brings you suffering, your mind can then cooperate with your life. Most of the time our mind does not cooperate with our life. As a result, we don’t know what’s going on in our life.

Look at the Western world in particular. We’re too much involved in objects of sense gravitation attachment; we over-exaggerate the importance of the sense world such that it’s constantly exploding in front of us. The way we’re brought up, we automatically believe that the external world brings us happiness. It’s true; check up. Perhaps we don’t assent to this intellectually, but if we look more deeply into our mind we’ll see that that’s what we believe. That misconception has sent roots deep into our consciousness.

I’m not talking about something intellectual. Forget about the intellectual. Just penetrate more deeply into your own mind and investigate your lifelong beliefs, what you think is best for you and what you think is not. Everybody holds to such beliefs. Don’t think, “I’m not like that. I just go with the flow.” That’s not true. Don’t think, “I don’t have any fixed ideas.” The nature of attachment is such that you always have fixed ideas of what is best for you: “This is me, therefore that is best.” Check up on your “this is me.”

So attachment to “this is best for me” based on ego’s conceptualization of “I’m Thubten Yeshe, this is me,” the conception of I, my mind’s fixed idea of who and what I am, this association of ego and attachment has nothing whatsoever to do with my reality, relative or absolute.

While I’m saying this you should be meditating, checking whether or not what I’m saying is exaggerated or exactly right. Check up on this right now. What I’m talking about is how the ego and attachment are associated, how they relate to each other.

What I’m saying is that the fundamental cause of attachment is the conceptualization of ego and in reality, this ego does not exist within you, either relatively or absolutely. But the ego mind projects and paints “I am this,” you get a fixed idea of what you are and then you start worrying, “I am this, therefore I should have that; I am this, so I need to maintain my reputation; because I’m this, I need that.” You check up.

Such fixed ideas of what you are, how you should be, which are completely mental projections, hallucinated, polluted projections, have nothing whatsoever to do with reality, either relative or absolute.

*NOTE: He was in the news around this time. From his Web site: May 31, 1975: a record crowd of over 90,000 at Wembley Stadium in London, England, watched as Evel crashed upon landing, breaking his pelvis after clearing 13 double-tiered buses. He died 30 November 2007. [Return to text]