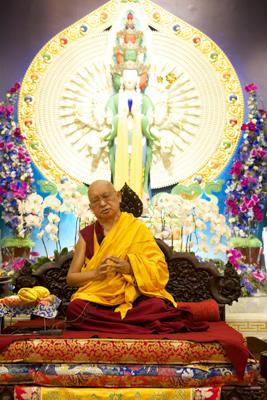 Compassion is the wish to free all living beings from suffering and its causes, and the embodiment of the compassion of all the buddhas is Chenrezig (Skt: Avalokiteshvara), the Buddha of Compassion. One of the most intensive and powerful Chenrezig practices is nyung nä, a two-day retreat that combines meditation on Thousand-Arm Chenrezig and recitation of Chenrezig’s mantra, OM MANI PADME HUM, with prostrations, fasting and silence. Abiding in the Retreat is a commentary to a nyung nä sadhana composed by Kelzang Gyatso, the Seventh Dalai Lama,1 according to the nyung nä lineage originating from Bhikshuni Lakshmi (Gelongma Pälmo), an Indian princess who cured herself of leprosy and achieved enlightenment through nyung nä practice.

Very little commentary to nyung nä practice is available in English. As nyung nä retreats are held each year in many FPMT2 centers, I thought to compile a nyung nä commentary by Lama Zopa Rinpoche, Spiritual Director of the FPMT. Whenever I mentioned to Rinpoche that I was working on a nyung nä commentary, however, he would object that he had yet to give the elaborate explanation of the practice. The one time Rinpoche began such a commentary, based on Kachen Yeshe Gyältsän’s extensive text, at Chenrezig Institute, Australia, in 1991, he covered only a little on nyung nä practice itself.

Because for many years I had been steadily collecting Rinpoche’s teachings on Chenrezig practice in general and nyung nä practice in particular, I was confident that I had enough material for a useful commentary to nyung nä practice. This book combines teachings given when Rinpoche participated in nyung näs at Kopan Monastery, Nepal, and Tushita Retreat Centre, India, in 1984; at Vajrapani Institute, California, in 1988; and in Taiwan in 1991; plus teachings given during an oral transmission of the nyung nä sadhana at Tushita in 2008 and during a Chenrezig great initiation in Singapore in 2009.3 As Rinpoche had asked for stories of the nyung nä lineage lamas to be added to a new edition of Nyung Nä to inspire people to do the practice, I also added these stories from various other teachings.4

Part One: Introduction contains the benefits of nyung nä retreat and of various practices within a nyung nä (taking the Eight Mahayana Precepts,5 reciting OM MANI PADME HUM, doing prostrations and making offerings) and the stories of Chenrezig, Bhikshuni Lakshmi and the lineage lamas. The remaining four parts (The Preparatory Ritual, The Actual Ritual, The Concluding Ritual and Additional Instructions) contain the actual instructions on how to do a nyung nä. As Rinpoche himself said, “The long motivations for the Restoring and Purifying Ordination and explanation of the benefits of doing nyung näs, taking precepts and so forth were done with the hope that you would understand that these are important practices and would wish to do them again and again in the future. Also, for you to know the way of doing nyung näs as correctly as possible.”

For their contributions to this book, heartfelt thanks must go, first of all, to His Holiness Serkong Tsenshab Rinpoche, who encouraged and inspired Lama Zopa Rinpoche to preserve and spread this powerful practice. Heartfelt thanks go also to Lama Zopa Rinpoche for, as always, his amazing patience, perseverance and generosity in sharing his experiences and knowledge of nyung nä practice.

Sincere thanks also to the many people at the various FPMT centers that hosted and recorded the teachings included in this book; to Nick Ribush and the many people at LYWA for gathering, preserving and spreading these teachings; to Claire Atkins and my late parents for their generosity; to Ven. Steve Carlier for his patience and kindness in helping with Tibetan terms; to Ven. Yeshe Chodron, Ven. Thubten Munsel, Alan Marsh and Jane Seidlitz for help with transcribing and checking some of the teachings. And special thanks to the many nyung nä participants at Chenrezig Institute who contributed to the publication of this book.

May Abiding in the Retreat inspire many people to do nyung näs, enrich the practice of those who do nyung näs and create the cause for Lama Zopa Rinpoche to give the elaborate nyung nä commentary.

1 See Nyung Nä: A Nyung Nä Ritual Sadhana of the Eleven-Face Great Compassionate One in the Pälmo Tradition with the Requests to the Lineage Gurus, by Losang Kelzang Gyatso, the Seventh Dalai Lama, translated by Lama Zopa Rinpoche and George Churinoff. In general, Abiding in the Retreat follows the translations in this nyung nä sadhana but sometimes uses Rinpoche’s translations. [Return  to text]

2 The Foundation for the Preservation of the Mahayana Tradition. [Return  to text]

5 Also called the Restoring and Purifying Ordination. [Return  to text]

1: The Benefits of Nyung Nä Practice »