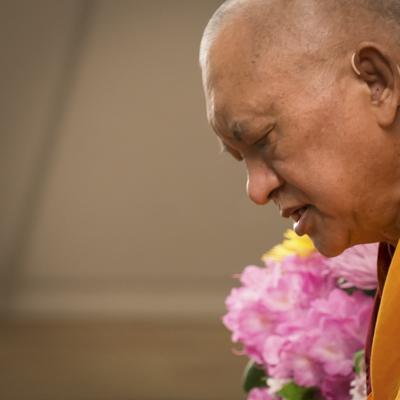 17. Meditation on the Front Generation

Also generate the buddhas of the five types inside the mandala. Visualize Thousand-Arm Chenrezig with Amitabha on his crown in the center of the mandala, and Akshobhya, Ratnasambhava, Vairochana and Amoghasiddhi around Chenrezig in the four cardinal directions.

Think that in front of you is the mandala, with Chenrezig in the center and the four buddhas around Chenrezig. Then invoke Chenrezig, surrounded by all the buddhas and bodhisattvas, from the pure land of Potala, which is to the south.

Invoke and make offerings to the empowering deities, who then initiate Chenrezig.

When you present the offerings in the short way, recite just the mantras and not the verses of offering: OM ARYA LOKESHVARA SAPARIVARA ARGHAM (PADYAM, PUSHPE, DHUPE, ALOKE, GANDHE, NAIVIDYA, SHAPTA) PRATICCHA SVAHA. Then offer the five sense pleasures: OM ARYA LOKESHVARA SAPARIVARA RUPA (SUPTA, GANDHE, RASA, SPARSHA) PRATICCHA SVAHA. Next offer robes or divine dress, ornaments and a jewel vase to the merit field. With the vase water you also purify the sentient beings of the six realms and generate bodhicitta in their minds.

In Mongolia I met an old monk, eighty or ninety years old, who had been a monk before the Communists came to Mongolia. He disrobed, and I think he later took the five lay vows when His Holiness the Dalai Lama came to Mongolia. He wore robes, though, so I’m not sure . . .

I meet him every time I go to Mongolia and he offers me different things. One time he gave me a nyung nä text compiled by some great Mongolian lamas. In that text there are additional offerings. I thought it would be very good to add them, so I took the verses for offering the seven signs of royalty, eight auspicious signs and eight substances from the Chenrezig great initiation. It would be very good to offer them after offering the vase.

Offering the seven signs of royalty

By offering the seven precious signs of royalty,
May I be victorious in the war with the four maras
And achieve the complete power to propagate the Mahayana teaching,
To quickly lead transmigratory beings to everlasting supreme happiness.

Just by being touched, seen, heard or remembered,
These eight auspicious signs blessed by the Victorious Ones
Eliminate all inauspiciousness and grant perfect sublimeness.
By this virtue, may I quickly and effortlessly achieve
The collections of the qualities of cessation and realization and the works for others.102

After that, offer a mandala. Here you can offer a short mandala.

Next offer praise to Thousand-Arm Chenrezig, then to the five types of buddhas.

Blessing the Vase Water and Reciting the Mantra

After the front generation, bless the vase water with nectar coming from Chenrezig’s hand. If you have generated yourself as Chenrezig, visualize that nectar flows from your own palm, as Chenrezig, and from the front Chenrezig’s palm and enters the victory vase on the altar, which becomes filled with transcendental wisdom nectar that can purify all your negative karmas and obscurations and those of all sentient beings. The water in the vase becomes, in essence, the transcendental wisdom of the Great Compassionate One, and, in aspect, nectar that has the power to purify all diseases, all spirit harms and all the negative karmas and obscurations accumulated with body, speech and mind. Each atom of the water has this power. Everything can immediately be purified with the nectar. You and all sentient beings are then able to generate all the realizations of the graduated path to enlightenment, especially bodhicitta.

If you haven’t generated yourself as Chenrezig, visualize that nectar flows into the vase from the palm of just the front Chenrezig.

Here you recite the long Chenrezig mantra while doing the meditation of blessing the water.

Many years ago in Taiwan we did a Chenrezig retreat for seven or ten days, upstairs in a large Chinese monastery. At the beginning, to mark the borderline of the retreat, we made torma offering, put a syllable and visualized the protector there. One girl who had been possessed by a naga told us that there were numberless pretas outside the retreat place, like trees in a forest. There were also three monks just outside the retreat boundary. One monk didn’t have a head and another had something wrong with his arms; they were pretas, and, it seems, in unimaginable suffering. As she was coming into the retreat room she saw a protector, who kicked her in the head, but she was still able to come inside. She had a pain in her head where the protector had kicked her.

She came to me during a break. Because she was possessed by a naga, even though she could walk, her legs were kind of stuck together so that she couldn’t move quickly. She asked me to give her refuge.

At the end of the session the blessed water was passed around and when it reached her she didn’t drink much. She said that the water was needed outside for the forest of pretas. I then prepared three buckets of water from the vase water and also chanted additional mantras. I gave them to Thubten Drolkar, a Taiwanese nun, but she was too scared to go outside. One man, the possessed girl’s friend, who was very familiar with the situation, took the buckets and sprinkled the water all over the ground outside. It seems that the water benefited the pretas outside greatly. Even though we don’t see them, there are so many beings, including spirits, all around us. Since the water had the power to purify the pretas’ negative karma, it was of unbelievable benefit. Since the vase water becomes blessed through Chenrezig, it has great benefit.

My main purpose in telling this story is to show you that the water you bless during a nyung nä has a lot of blessings. People should drink it and it should also be sprinkled outside. It’s very good for purifying the spirits, but you can also think that you are purifying the sentient beings of the six realms.

When you are doing many nyung näs, don’t put all the water outside. Keep the continuation of the same water and add to what is already there. It then becomes more and more powerful. After you have done many nyung näs, the blessed water can be given to people who are sick or dying to purify their minds. You can give it to many other people to purify and bless their minds, their hearts.

Absorption of the Exalted Wisdom Beings

The transcendental wisdom of the self generation absorbs into the front-generation Chenrezig.

The Principal Practice of Praise

Again, here, we do prostrations. We do twenty-one praises with prostrations to Thousand-Arm Chenrezig.

Above your crown on a lotus and moon disc is Bhikshuni Lakshmi, in the aspect of a renunciate, with her two hands together in the mudra of prostration, recommending you to Chenrezig. Remember that Bhikshuni Lakshmi received this nyung nä practice from Chenrezig and actually attained Chenrezig, becoming enlightened in the essence of Compassion Buddha.

If you want, you can also generate a motivation of bodhicitta to do the prostrations.

As much as possible without a distracted mind, prostrate to Thousand-Arm Chenrezig, inseparable from your guru. This accumulates the most merit.

Each time the desire comes to be warm, for example, that attachment to warmth creates the cause to be in the hot hells. Each time the desire comes to be cool, that attachment to coolness creates the cause of the cold hells. Similarly, desire for food and drink creates the cause to be born in the preta realm, where those sentient beings pass their lives with intense suffering of hunger and thirst. The ripened aspect result of anger is rebirth in the hells. Ignorance causes one to be born in the animal realm, among those foolish suffering beings. (This is just to give you a general idea.)

With awareness that Chenrezig is guiding you by purifying your obscurations, make prostrations. Again, this is extremely effective for the mind. You get so much feeling for Chenrezig. You feel Chenrezig is very close to you; you don’t feel any distance between you and Chenrezig.

Also, you can sometimes think, “Even if I die today by fasting and doing prostrations, bearing hardships to practice Dharma is a very worthwhile way to die. I have died numberless times in beginningless lifetimes for meaningless things. I have died so many times while creating negative karma. I have died so many times for material possessions and for other meaningless things. I have died so many times in wars or while climbing mountains, trekking, sailing, surfing or skiing for pleasure. But I have never died for Dharma; I have never died working for sentient beings. If I die today, it’s extremely worthwhile.” You should think like this especially at the times when you feel exhausted and your mind is so discouraged that you don’t want to do anything.

A Guide to the Bodhisattva’s Way of Life says that it’s regarded as better for a person to have a limb cut off than to be killed.103 Like that, no matter how exhausted you feel when you practice Dharma, and even if you get sick, it’s much better than experiencing the results of all your negative karmas. Experiencing suffering during a nyung nä is much better than not doing any purification and experiencing all the undesirable results of negative karma. We don’t need to talk about the lower realms but just about the human realm. Even if we’re born again as a human being, we have to go through problems again and again. Even in one life we go through hunger, being unable to find a job, running out of money, disharmony in relationships, fighting and other difficulties so many times. We take rebirth again and again and experience this kind of life again and again, going through the same problems. Without needing to talk about the sufferings of the lower realms, just think about experiencing this suffering, confused human life again and again. It doesn’t give you the opportunity to practice Dharma as you wish.

Even if you die while practicing Dharma, while using yourself as a servant of other sentient beings, it’s extremely worthwhile. It’s much sadder if you die while following the selfish attitude. That is extremely sad. There is then no happiness at the time of death and no happiness after death. Dying with the thought of cherishing others is the skillful death of a wise person. So, why don’t you bear the hardships to practice Dharma? Even if you get sick, it’s really nothing to be shocked about or to dislike—you would prefer to have your hand cut off than to be killed.

103 Ch. 6, v. 72:
Why is a person condemned to death not fortunate if they are released after having a hand cut off?
Why am I who am experiencing human misery not fortunate if by that I am spared from (the agonies of) hell? [Return to text]