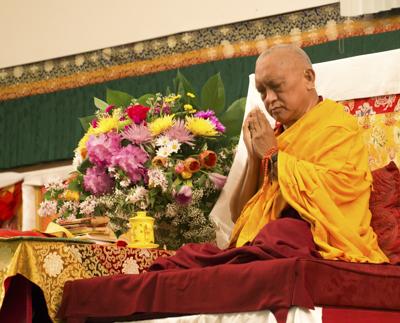 7: The Benefits of Prostrations

THE GENERAL BENEFITS OF PROSTRATIONS

By covering two atoms when doing one prostration, you create the karma to be born as a wheel-­turning king two thousand times.

Now, from the floor where you are prostrating down to the other side of the earth, your body covers numberless atoms. Therefore, when you do one prostration, you create the karma to be born a wheel-­turning king a thousand times that number of atoms. But it’s not that you are doing the prostrations to become a wheel-­turning king—Buddha just used this example to give us an idea of how much merit we accumulate. Of course, since you do the prostration to a buddha, it becomes a cause of enlightenment.

Therefore, when you do prostrations, it is important to stretch out your body as much as possible, even your feet. If you keep your feet supported on the tips of your toes, the upper surface of your foot doesn’t touch the ground. Stretch out even your feet, so that the upper surface covers the ground. Since covering one atom has unbelievable merit, if you stretch out your feet, so many times numberless atoms will be covered by them, and there will be unbelievable merit. Stretch out as much as the space allows. If you have long hair, when you prostrate, even your long hair becomes beneficial because it covers more ground. The more area your hair covers, the more merit you accumulate. Also, the longer your nails, the more merit you accumulate. Since people who are tall and fat cover more ground, as do those with long hair and long nails, they should do as many prostrations as possible!

THE TEN SPECIFIC BENEFITS OF PROSTRATIONS

There are ten specific benefits of doing prostrations to a buddha. (This is prostrating to a holy object, not to a cow or a house.)

The first of the ten benefits is that you will receive a pure golden-­colored body.

Third, you will have an extremely sweet voice. Everything you say will sound so sweet that other people will want to listen to you, and it will be beneficial for their minds.

Fourth, you will be able to go anywhere without any fear. You will never feel shy or uncomfortable in any group of people. Like a being who has lived a holy life, like Buddha, there will be no fear no matter whom you go to see.

Fifth, you will be born in a higher realm, as a deva or a human being.

Sixth, you will make everyone who sees you happy. This is like His Holiness the Dalai Lama and many other holy beings. Everybody wants to see them, and anybody who does see them experiences much bliss or peace in their mind.

Seventh, your body will be magnificent, or glorious.

Eighth, you will always be in the company of buddhas, bodhisattvas and arhats.

Ninth, you will have great enjoyments.

The tenth benefit is that you will quickly become enlightened.

The many benefits from doing one prostration can be integrated into these ten benefits.

These benefits are in relation to prostrating to one buddha or even one statue of a buddha. It is mentioned in the teachings that the benefits of prostrating or making offerings to the actual Buddha or to a statue of Buddha are exactly the same. Since making prostration to one buddha has these un-believable benefits, doing one prostration by thinking of all the buddhas creates infinite merit.

HOW TO DO PROSTRATIONS PHYSICALLY

No matter which tradition you use to do prostrations, the main point is to do them respectfully. Your manner should not be disrespectful.

If there’s enough space, it’s good to do full-­length prostrations, which are according to the tradition of Naropa, the great Indian yogi. The normal five-­limb prostration is according to the sutra, or Hinayana, tradition. The time to do everything in the best way we can is now, while we have this precious human body. We should do the best we can with our life, for ourselves and for other sentient beings. If we don’t do this when we have a precious human rebirth, when will we again have the opportunity to do these things and to achieve enlightenment? Therefore, do full-­length prostrations.

Keep your two thumbs tucked inside your hands. This signifies offering a jewel and means that you are not offering empty hands.

You then put your hands at your forehead, which creates the karma to receive the curled white hair between the eyebrows, the dzö pu, another special quality of a buddha’s holy body. To have this aspect to benefit sentient beings, we need to accumulate merit.

Keep your feet together. When you put your hands on the floor, to be re-spectful, don’t stretch out your fingers so that there is a gap between them. If you do prostrations in the wrong way, if you do them disrespectfully, you create negative karma. Even if you do them wrongly out of ignorance rather than disrespect, it still becomes negative karma.

When you lie down on the floor, don’t stay there a long time. Get up as soon as you touch your head to the floor, as that signifies quickly getting out of samsara. It is disrespectful if you lie down for a long time, and that creates the cause to be reborn as a worm, a snake or other animal that pulls its body along the ground.

Do a prostration, stand up, then do another prostration. The teachings mention that if you don’t stand up straight but start to do the next prostration while you are still bent over, it is a mistake and disrespectful and creates the cause to be reborn as a worm that moves in a similar way.

HOW TO DO PROSTRATIONS MENTALLY

There are two most important points to remember when you do the practice of prostrations. To make the prostrations most profitable, to collect the most extensive merit, you should think that each holy object—whether a statue or a painting of a buddha—is your guru.

We should especially practice guru yoga when we do prostrations to Chenrezig. Who is Chenrezig? The guru. Besides that, Chenrezig is all the beings in the merit field. Higher bodhisattvas manifest many billions of bodies with many heads, mouths and arms and then make offerings and do prostrations to the buddhas. Like that, think that on each atom there are buddhas equaling the number of the atoms, and around each buddha there are numberless replicas of you doing prostrations. If you can think that, it’s excellent. Besides thinking that Chenrezig is all the holy beings in the merit field and all the holy objects, you can think that all the pictures, statues and other holy objects on all the altars where you are prostrating are the guru.

If there is one statue of a buddha, prostrate by thinking, “This is my guru.” By thinking of the guru in this way, you accumulate the most merit, more merit than by prostrating to all the buddhas, because the virtuous friend is the most powerful among all the powerful objects.

You can then think that one statue is, in essence, all the holy objects of the ten directions: all the statues, stupas and scriptures. Then prostrate to every single holy object that exists in this world and in other worlds. Remember all the benefits of making prostration to one buddha or one statue of buddha. Again, when you think of prostrating to all the buddhas and bodhisattvas of the ten directions, be aware that they are also your own virtuous friend. In this way, you create unbelievable merit.

Also, besides the material holy objects, there are actual living holy beings, your gurus and numberless buddhas and bodhisattvas (who are manifestations of your guru), in the direction toward which you are making prostrations. By doing one prostration to so many holy objects in this way, regarding every one as the highest object, the guru, you collect unbelievable merit. Your ordinary mind can’t comprehend how much merit you accumulate.

8: The Benefits of Offerings »