A student wrote that since she started reciting the mantra Extremely Conquering from Bondage (liberating the body, speech and mind from bondage) a few days previously, a large lump on one side of her spine had decreased in size and a skin cancer on her face had disappeared completely. Rinpoche typed this response and asked that it be kept for rejoicing and to show the success of the mantra. Lightly edited by Ven. Holly Ansett and Sandra Smith.

My most dear, most precious, most kind, wish-fulfilling one,
Billions of thanks for your heart practice and services. So now you can explain for those who have Ebola to recite the mantra liberating the body, speech and mind from bondage.

Those people who are in the countries where there is Ebola can wear the mantra as a protection and also recite the mantra. It is very beneficial to make the mantra public, not only for general things, but especially for Ebola. General means problems, difficulties, being harmed by living beings, not necessarily only human beings. It is OK [doing] urgent work to help others.

My hope is that this mantra can reach those countries that have Ebola, for them to get the mantra. Practice the mantra as medicine. This is also what they need to have a healthy long life, so they can wear the mantra on the neck and also recite it. If they can hear how it benefited you, that would be great.

Thank you very much. If you tell people about your experience of this mantra then that gives trust, even though the mantra comes from Buddha and it is purely for us suffering people in the world, but without discrimination of this and that religion. Instead, practice the mantra as one takes medicine, so wear it on the neck and also recite the mantra.

Please have a meaningful and happy long life.

PS. It might be OK just to recite the mantra five times every day, but according to your own experience of reciting it 25 times a day, then people can also try that. So this is my advice for people who already have Ebola, but for those who are in a lot of pain it may be difficult to recite the mantra that much.

Rinpoche sent this request to a student to build a statue of the Naga King, to help with the Ebola outbreak in Africa. 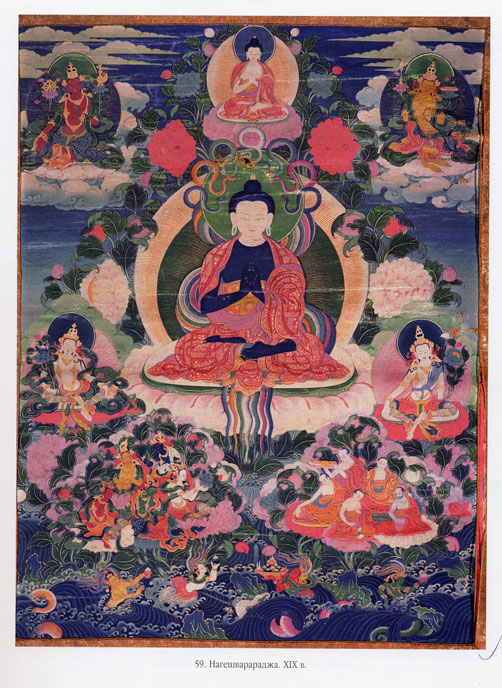 My very dear, most precious, most kind, most dear, wish-fulfilling one,
Here I have one thing to ask: to build a Naga King statue. This is one of the Thirty-five Buddhas, called the Naga King. If there are a lot of infectious skin diseases in an area, it is often caused by nagas. So building a statue of the Naga King, even a small statue, stops those kinds of diseases.

I checked a few times what to do to stop the Ebola disease and one thing is to build a Naga King statue one and a half stories high in the area where there is Ebola. This came out in my observation as very useful to prevent the disease. I also explained to __ about this.

The Naga King has a white head and the rest of the holy body is blue, and the hands are in a different mudra from Shakyamuni Buddha. Reciting the Naga King mantra is very powerful, and if one recites the mantra 100,000 times it can stop leprosy disease. [The name mantra of the Naga King: Lu wang gyi gyal po.]

So to prevent Ebola it came out very good for this statue to be built in the area [where there is Ebola]. I don’t mean directly in the exact area, just in the general area, if you are able to find suitable land. If there is a place, then it would need to be checked first, to see if it is the correct area to have the benefit.

What do you think? I am sure people there wouldn’t want to sponsor the statue. I am sure they would have no understanding why they should build a Buddha statue, it’s so difficult, but maybe you can get help from Chinese or Western students.

PS. The statue material could be made in Nepal. [It can be similar to statues Rinpoche has had made in Kopan. Rinpoche can give example.] Before going to that level, the first thing would be to know if a statue can be built in the area where the Ebola is spreading. If it’s not possible to build the statue there, then no need to take it further. One way would be to see if you can somehow contact the leaders of the area and see if land can be given for a statue to be built. If they are wise, they will do anything to stop Ebola, but it depends on their mind and how open they are.

Rinpoche gave the following advice on how to help the Ebola virus situation.

Build a one-storey or 1½ to two-storey statue of the Naga King (from the Thirty-five Buddhas, this is the buddha with a white head and blue body) in the country where the outbreak is happening. Then any sickness caused by nagas doesn’t cause harm, and it can help to stop the disease.

Rinpoche checked on a superbug called NDM-1 (New Delhi metallo-beta-lactamase), which is an infection that is resistant to antibiotics.

It is good to do the practice of Vajra Armor.

Rinpoche sent the following advice to a student who had tuberculosis.

Please do this practice for your tuberculosis. Recite the following Black Manjushri mantra:

Recite this, follow this sound, and if you have devotion there will be great benefit. Black Manjushri mantra is highly beneficial for healing ulcers, tuberculosis, and so forth. Generate a bodhicitta motivation by thinking:

"I have received all my happiness from countless transmigratory beings, who have been my father and mother numberless times, and have been extremely kind numberless times. I must lead them to enlightenment, and therefore I must achieve enlightenment. Therefore, I am going to recite this mantra to benefit the transmigratory sentient beings who are devoid of happiness and who are tormented by suffering.”

Then, thinking in this way, recite the mantra.

Visualize Black Manjushri and calm, clear nectar being emitted and purifying your negativities and all disease, negative karma, and defilements, and then generate strong faith that when you stop reciting the mantra you have received all Manjushri’s qualities within you.

Rinpoche recommended the following practices for a student who had been diagnosed with Ross River Fever, a mosquito-borne illness.

Dear Colin,
My advice is as follows:

FPMT: Resources for the Coronavirus Pandemic