In this advice, Rinpoche recommends Vajra Armor mantra and The Prayer Liberating Sakya from Disease as the main practices for protection and healing from coronavirus COVID-19. Rinpoche also advises that bodhicitta and tonglen are essential practices at this time. Read Rinpoche's previous advice about coronavirus here. See also the new FPMT webpage: Resources for the Coronavirus Pandemic. 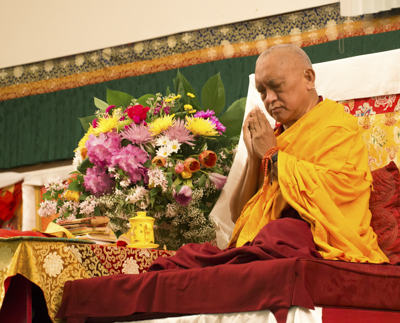 My most dear, most kind, most precious, wish-fulfilling one,
I don’t know if students are doing this: I told Chinese students in Mainland China that they must do Vajra Armor to not get the disease, coronavirus (COVID-19). If they get the disease, by doing this practice they will recover, otherwise they may die.

Many people became great healers by reciting the Vajra Armor mantra in the past. There is one lama who helped an American monk’s father, a long time ago, before we got the land for Maitreya Institute in Bodhgaya. The monk’s father had cancer and I think this lama did some puja for him and maybe he recovered. So this lama became famous as a healer after doing that, and he healed other people too.

When this lama, who was known as a great healer, went to Holland, there was Drepung Loseling geshe at our FPMT center there, who asked him what mantras he used to heal people. The lama said White Tara, but he didn’t mention exactly the mantra. Then the geshe asked him for White Tara initiation, which that lama then gave him. Later in my room in Bodhgaya, the lama told me that actually the main mantra that he uses is Vajra Armor.

There are many healers at Sera Monastery. I met one man who was the father of Lama Pasang’s disciple. He became a great healer and he healed many people. I don’t know who he is. It seems he didn’t know much Dharma and lamrim, but he became a great healer by reciting this mantra. This is what I have come to know, that there are many healers who use this mantra.

If you recite one mala of the Vajra Armor mantra a day it is so powerful to heal people, besides giving protection.

The other practice is a prayer by the great yogi Thangtong Gyalpo. In the past there was this contagious disease that happened amongst the Sakya [practitioners] and many people died, so he wrote The Vajra Speech of Mahasiddha Thangtong Gyalpo: The Blessed Prayer Known as “Liberating Sakya from Disease” and then all the Sakyas were healed from the disease. This amazing miracle happened. This prayer is good for oneself and also for China and other countries to not get diseases such as coronavirus, and to be healed if you have it. So this is good to recite to help, including for oneself.

Or at least you can recite this prayer by Choje Gotsangpa. He was a great Kagyu lama who didn’t like having a monastery or center or any group. He didn’t like that and he didn’t have that, so he went to other monasteries and groups of people; he went there but he never made a center or monastery himself. Anyway, he said:

Recite this verse as if you are reciting OM MANI PADME HUM. Recite this verse in the same way you recite a mantra, reciting it as much as you can—for example, while you are walking—in the same way that Tibetans recite OM MANI PADME HUM. Probably Western people only recite mantras when they are sitting down, but Tibetan people recite them while walking or shopping. So you can recite prayers like that.