The Vajra Speech of Mahasiddha Thangtong Gyalpo: The Blessed Prayer Known as “Liberating Sakya from Disease” 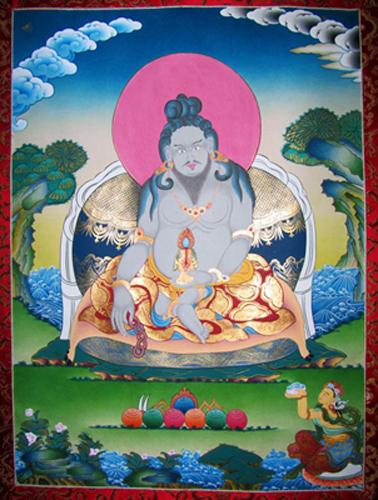 All sentient beings—my mothers who are infinite like space— go for refuge to the precious Guru-Buddha.

This form of going for refuge was given by Arya Avalokiteshvara to Ka Ngapa Paljor Sherab and by him to Mahasiddha Thangtong Gyalpo. Afterwards, it provided infinite benefits for living beings.1

Recite these verses as many times as you are able.

Recite this mantra hundreds of times. Then:

May all the diseases that sadden the minds of sentient beings
That result from karma and temporary conditions,
Such as the harms of graha-spirits,2 illnesses, and the bhutas,3
Not occur in the realms of the world.

May whatever sufferings there are from life-threatening diseases that,
Like a butcher leading an animal to be slaughtered,
Separate the body from the mind in a mere instant,
Not occur in the realms of the world.

May all embodied beings be unharmed
By acute, chronic, and other epidemic diseases,
The mere sounds of whose names terrify beings,
As though they had been placed inside the mouth of Yama, the Lord of Death.

May all embodied beings be unharmed
By the 80,000 classes of interferers,
The 360 evil spirits4 that harm suddenly,
The 4245 diseases, and so forth.

May whatever sufferings there are due to disturbances of the four elements,
Depriving the body and mind of every happiness, be totally pacified
And may the body and mind have radiance and power,
And be endowed with long life, good health, and well-being.

By the compassion of the gurus and the Three Jewels,
By the power of the dakinis, Dharma protectors, and guardians,
And by the power of the truth of the infallibility of karma and its results,
May all these dedications and prayers be fulfilled.

Once, an epidemic was spreading from one person to another at the great seat of the Glorious Sakya Monastery. Whatever the mantric masters tried—thread crosses,6 tormas, medicines, mantras, protection-amulets, and so forth—had no effect and the monastery was in danger of annihilation. At that time, the Great Lord Mahasiddha [Thangtong Gyalpo] performed the “space refuge,”7 recited a number of mani mantras, and proclaimed this prayer, after which the entire epidemic immediately ceased in dependence upon its performance. Thereby, it became renowned as the Vajra Speech Radiating Masses of Clouds of Blessing Entitled “The Prayer Liberating Sakya from Disease.”

7 Tib: ma nam mkha' ma'i skyab 'dro, so-called because the verse has the words “equal to space.” [Return to text]

FPMT: Resources for the Coronavirus Pandemic