The Shortcomings of Anger

Kyabje Lama Zopa Rinpoche explained the shortcomings of anger at the Twelfth Kopan Course held at Kopan Monastery, Nepal, in 1979.

This teaching is an excerpt from Lecture 35 of the course. Lightly edited by Sandra Smith. 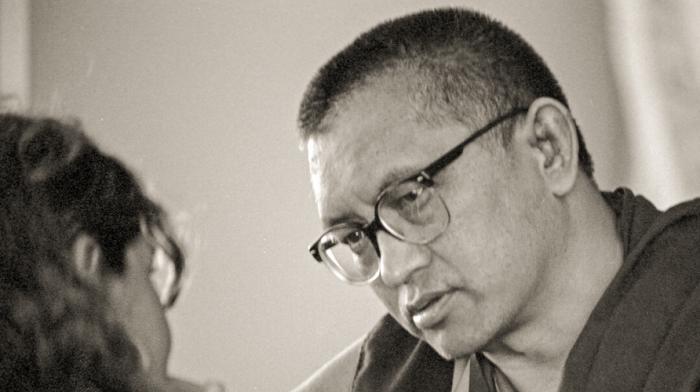 In order to control anger, we must reflect well on its shortcomings; how anger is extremely dangerous. The flame which comes from a match stick is so small, but it can burn a whole mountain, it can destroy all the bushes, all the trees on the mountain. One small fire spark touching a wire and burning it can destroy a whole building, it can burn the whole city. Like that, even if the anger is small, even if it has arisen for one second, the danger it can cause is unbelievable. However much incredible merit there is gets destroyed by anger arising—even the small anger that is arising for one second. It puts off generating the realizations of the path to enlightenment for many eons, so, like this, anger is so harmful to achieving the happiness, the perfection of our future life—nirvana and enlightenment.

When we are in danger of anger, we should remember especially the shortcomings of anger. When we are in danger of anger which is about to arise—when somebody is creating a situation or starting to talk in a way which makes our anger arise—when somebody is making preparation for our anger, so also we should make preparation from our own side to control the anger. If another person is making preparation to arise anger within their own mind, from our own side we should make preparation to control the anger, not to let anger arise. That is a very brave person who is able to do this; who is able to take care of his own mind, who is able to control his own disturbing unsubdued mind, who doesn’t let himself go under the control of the disturbing unsubdued mind. That is the real hero; that is the real brave person who can control his mind, who doesn’t let his mind go under the control of the disturbing unsubdued mind.

While the anger is arising, even if we cannot remember the shortcomings of anger and the remedies for anger; if we cannot remember just before the anger arises, if we are very unconscious and our mind is completely absorbed in that discussion—if we are completely concentrating on whatever the other person is saying; even if our mind feels uncomfortable, and anger starts to arise, but we are completely unconscious to control the anger; even if we are unable to remember the remedies and to control the anger before it arises—at least we should recognize it and remember the shortcomings of anger, and then apply the remedies of anger, all the meditations that are explained in the lam-rim teachings and the thought training teachings.

Even if the anger is arising at the time, we should not just think, “Oh, now the anger is arising, now I am too late to control it. Anger has arisen before and I have controlled it before, but now I am too late. Let it arise because I’m too late, so let it arise. Let it go, let it arise.” However many seconds we let anger arise, that much it has destroyed all our own happiness, the perfection of our future lives, that much it has destroyed already. If we still do not try to control our anger, but we let it arise; if we let our mind go under the control of that anger, then however many hours, minutes or days—however long we are angry for, we lose an incredible number of merits and the results, the happiness and perfection of our future life. Without talking about a thousand or one hundred eons of merit being destroyed by anger, without talking about that, even if the merit that has been accumulated in one day, or even one hour or one minute, is destroyed by anger, it is a great loss. The anger has destroyed one million eons of merit and that is a much greater loss than having lost uncountable millions of dollars.

There are many beggars who have accumulated much merit, who don’t have one single paisa on their body but have accumulated merit; there are many beggars who are millionaires of merit. After death they get reborn in the realm of the happy transmigratory beings, in the pure realms. There are many, many millionaires who have a million dollars, but have not accumulated one single merit in this life. They are millionaires having many million dollars, but after this life they will be reborn in the lower realms, having not one single paisa, just having only the bare bones. Remembering the shortcomings of anger and how difficult it is to create even one merit, it is extremely important not to lose the merit.

When anger has arisen it changes the whole room, it makes us very unhappy. The whole vibration of the room changes and becomes very negative. Even the room has a very negative vibration, there is no happy vibration. When anger has arisen like this, the mind becomes completely crazy, so there’s not much to think about, our mind is completely empty, possessed by the devil of anger.

Once anger has arisen, it is very dangerous. We feel careless and there is no fear, there’s no doubt. We are careless about killing our wife, or whoever is there; even our own children, who we have brought up. There’s danger of killing even our children or our friends. We destroy or break our material possessions, the valuable things around us. If there are cups and plates on the table, when anger has arisen there’s not one single reason for breaking them. The cup and plate are not the things that caused our anger to arise; they are not the reason, but you see, there’s no freedom, our mind becomes completely crazy with anger. So whatever is in front of us, we throw on the floor or break on the table. Whatever tools or things are around, our own mind is very careless, so we use whatever we can find around—stones or sticks, knives or guns, whatever is around; whatever we can find. The mind is very careless, very uncontrolled, so there is great danger of killing ourselves and other people. We hear and see on the television the person who kills his own family, his wife, by anger arising. So many people are killed. It happened so many times—someone killed his children, his father or mother, or outside people also. When there is incredible anger, we become very careless of our own life. If we are driving a car, then we purposely destroy another car by having an accident.

Even if someone is usually very beautiful; if his body has a very good color, good complexion, and he is smiling, very nice, speaking gently all the time, but one day when anger has arisen, that person becomes very fearful looking, very terrifying. Usually he has a very nice complexion, but when anger arises, even the color of his skin is kind of dark, kind of burned dark. His eyes become bigger, more white. That person usually has very nice looking eyes, peaceful looking eyes, but that time the eyes become very big, the face becomes very tense. Even the manner of the hands, even when the person walks, the sound of the feet is bigger, is kind of heavier. If the person is going on a wooden floor, he makes a big noise. The steps are heavier and the manner of the hands is very rude; the hands are like this, kind of putting like this to the person in front. While the anger is rising there is no respect. At that time the whole aspect is similar to a person intoxicated by wine, like that. His mind is burned by anger, so even the aspect is like that.

E-letter No. 131: April 2014
Practicing Lamrim as a Householder
The Great Yogi Milarepa
The Yoga of Sleeping
Is Attachment Completely Negative?
Kopan Course No. 12 (1979)
Russian translation: The Shortcomings of Anger