This teaching is an excerpt from Lecture 24 of the course. Lightly edited by Sandra Smith. 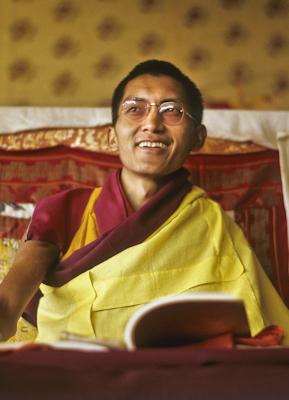 If we wish to achieve enlightenment in one brief lifetime like the great yogis, from our own side it can be achieved, unless we are not following the path, not making an attempt to generate the three principal paths and the gradual path of tantra. If we follow these paths, there is no reason why we cannot achieve enlightenment in one brief lifetime.

The great yogi Milarepa practiced the path by living in a dried cave, in an empty, bare cave. If we saw Milarepa’s holy body as it appeared at that time, if we were able to see it now, it is something that we couldn’t believe, we couldn’t imagine. We couldn’t believe that it is the great yogi, Milarepa. His holy body was very skinny, not like our body, which is very healthy, very fat, very shiny. His holy body was not like that. The color of his holy body was kind of blue and he was very thin. If we saw him, we might think he could fall down very easily or he could be blown by the wind very easily. His holy body is not like our body. The great yogi, Milarepa, didn’t have hundreds of clothes in his cupboard, to change into every day. He didn’t have hundreds of shoes to wear in different seasons, in the rain or the sun, and there was no way for him to change into different shoes.

The great yogi Milarepa didn’t have in his cave the various foods that we have. We have breakfast in the morning after the sun has risen, what we call breakfast. Then around twelve we have what is called lunch and in the evening time, around six or eight o’clock we have what we call dinner. Then there are so many tea breaks in between. There are so many teas and coffees, then many biscuits, many chocolates, again many other pieces in between those times. We have bread or subje or cornflakes for the breakfast. There are many different choices of food to have even for breakfast.

There was a kitchen or dining room or sitting room, whatever it is called. Although Milarepa lived there for many years, it was still a bare cave, with what is called a kitchen, an ordinary room or a bedroom, or whatever it is called. He didn’t have electricity in the cave and he didn’t have a car outside. However, he had clothes—a robe and a scarf—and he had one clay pot, which he used to cook nettles. Even that pot broke one day, but because it was never washed, the residue of nettles became very thick inside. Even though the clay pot was broken, the inside was left there in the shape of the pot.

However, he lived in the bare cave, where there was no mattress and no carpets. He was living like that, with one scarf, and his only food was nettles. He practiced the path, though his holy body was very thin. However, the great yogi Milarepa, by following the path with much hardship, received enlightenment a long time ago.

However, even though we have so many material possessions, our body is healthy and we have a very luxurious life, we have still not reached enlightenment; we are still left in samsara. Those great yogis like Milarepa, those great pandits who didn’t have a luxurious life like this, reached enlightenment ages ago by following the path, with much hardship. Our living conditions, the means of living are better and we are that much more rich, we are incredibly richer than these great yogis, therefore, there is no reason why we can’t achieve enlightenment by following the path, as they did.

E-letter No. 131: April 2014
The Shortcomings of Anger
Practicing Lamrim as a Householder
The Yoga of Sleeping
Is Attachment Completely Negative?
Kopan Course No. 12 (1979)