An excerpt from a teaching by Lama Yeshe during the twelfth Kopan meditation course, November 1979. Edited by Nicholas Ribush. Read a transcript of the entire lecture here. 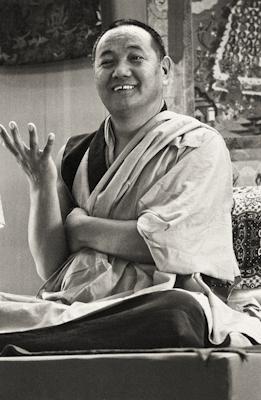 In his lam-rim teachings, Lama Tsongkhapa very clearly describes three types of eight worldly dharmas: black, mixed and white.1 When we engage in worldly activity, one aspect of our action might be good, but as we’re doing it a negative thought can arise so that the result will be sort of mixed. So philosophically, and this is also in the lam-rim, you can’t say that all attachment is negative. Westerners can be over-sensitive. They see in the lam-rim that attachment is our biggest problem and conclude that it must be completely negative. Lama Tsongkhapa says, “No!”

Logically we can see that, from the Buddhist point of view, all human life, including our body, comes from the positive mind. It’s positive karma that produces this body that gives us the ability to enjoy things. But, as human beings, we have limitations. When the lam-rim teachings highlight certain aspects of our life as negative, we can jump to the conclusion that everything to do with attachment is negative: “I am completely negative; the world is completely negative.” Then everything gets very dark, because that’s the exaggerated way in which we project or interpret it.

I want you to understand clean clear that we distinguish two things: negative, or sinful, and positive. Attachment, or desire, can be negative and sinful, but it can also be positive. The positive aspect is that which produces pleasure: samsaric pleasure, human pleasure—the ability to enjoy the world, to see it as beautiful, to have whatever you find attractive.

So you cannot say that all desire is negative and produces only pain. Wrong. You should not think like that. Desire can produce pleasure—but only temporary pleasure. That’s the distinction. It’s temporary pleasure. And we don’t say that temporal pleasure is always bad, that you should reject it. If you reject temporal pleasure, then what’s left? You haven’t attained eternal happiness yet, so all that’s left is misery.

But you should not make the mistake of trying to actualize temporary pleasure [as an end in itself]. You can enjoy it while you have it but you should not squeeze yourself striving for it. The problem is the mind that believes temporary pleasure to be the best there is. That’s a total delusion, an over-estimated conception. Like looking at a cloud in the sky and thinking, “What a beautiful cloud; I wish it would last forever.” You’re dreaming.

We should recognize all our human pleasures as similarly impermanent. They come; they go. They’re limited and we should expect them to be limited. That’s their nature. Our expectations should always be in accord with the way things are. Therefore we should not grasp at temporary pleasure as if it were eternal, everlasting happiness. That’s deluded, a fantasy.

Of course, the lam-rim and Mahayana Buddhism in general talk about attachment and self-cherishing as incredibly big problems. And when you hear that, you might think, “I want to give them up today!” You can’t. It’s impossible; you’re too ambitious. You need to understand that attachment is a problem in everyday life because you have too many fixed ideas and unreasonable expectations. You can’t give all that up overnight. Work it out slowly: “I’m grateful to understand how attachment works, but it will take time to overcome it. There are certain things I can handle now but I can’t manage everything at once.”

Remember what I said about the mixed eight worldly dharmas—actions that are a little bit white and a little bit black so that the results are mixed too; not totally negative. So you have to see where you fall in this and use your own judgment when deciding how to deal with your own attachment. Just don’t look at all attachment as completely negative. It’s not. There are degrees of attachment.

You’ve probably heard about the five paths and the ten bodhisattva levels (Skt: bhumi). For example, there are the paths of merit, preparation and right seeing, at which point one attains the first bhumi. It’s quite a long journey. From there up to the eighth bhumi, you can still have some attachment. As I said, it has degrees.

Knowing this, we beginners should be encouraged that it is only when we reach the incredibly high eighth bodhisattva bhumi that we are completely free of attachment. Starting from where we are, we first deal with its gross levels and slowly, slowly rid ourselves of it.

Well, philosophically, we might understand attachment clean clear, but in practice we have to be reasonable and, as the lam-rim explains, have a realistic attitude toward attachment. So, if you see some benefit for yourself or others in doing something, even small, although it might be tinged by attachment, do it. Do what you can; that’s good enough.

When some Westerners first encounter the lam-rim teachings they get the impression that it’s all about suffering: “Buddhism says I’ve been suffering since forever! I should be suffering!” Since they’ve been brought up to believe that in fact they should not suffer and should always enjoy pleasure, they really don’t like this Eastern way of thinking and can’t reconcile the two. Have you felt like that? Anyway, it’s not true. Buddhism wants you and all other sentient beings to discover everlasting happiness and bliss; eternal peace. That’s the enlightenment experience; that’s the goal of the lam-rim teachings. Don’t think that small worldly pleasures are the only happiness there is; that if you just have this thing or that, you’ll be happy. That’s small, narrow-minded thinking. And that’s the problem.

Worldly happiness is OK, but judge it reasonably. Enjoy it without grasping at it as real, which only results in more pain. That’s all that Buddhism is talking about. You should have pleasure and not feel guilty when you do. What do I mean by pleasure? It’s a feeling that satisfies you for a moment and doesn’t disturb your mind. You get a little pleasure—that’s good enough. Accept it for what it is and don’t feel guilty. Be as happy as possible. If you’re irritated, how can you be peaceful within yourself or give happiness to those around you?

Therefore, if you’re experiencing pleasure, be reasonable; remain calm and clear, even if you notice that your grasping mind is there beneath it all. And if you have a feeling of loving kindness toward another, enjoy that too. Don’t feel guilty.