Kyabje Lama Zopa Rinpoche gave this teaching on the mandala offering at the Tenth Kopan Course held at Kopan Monastery, Nepal, in 1977.

This teaching is an edited excerpt from Lecture 17 of the course. Read more teachings about mandala offerings in Lecture 18 of this course. 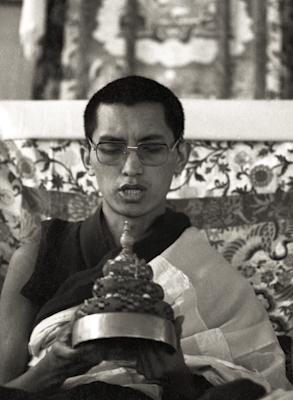 The mandala offering is one of the most powerful methods to collect merit. It is a specific method that purifies the delusion of miserliness, besides purifying all our other delusions and obscurations. It is a very powerful remedy and a medicine that cures the disease of miserliness and attachment.

The outer mandala offering is contained in the prayer at the beginning of the course book, The Wish-fulfilling Golden Sun. This explains how to make the offering and how to visualize the place—the four great continents and eight small continents, with Mount Meru, where the categories of the sura gods live, at the center. At the top is the Realm of the Thirty-three Gods, the city of Thirty-three—in Tibetan, tsa-sum. The asuras are situated below the mountain, on the surface of the water—at the edge of the water where the ocean stops—and the four categories of sura are above the ocean.

One question is, why can’t we see Mount Meru? If there is Mount Meru and if there are other continents, why can’t we see them? Why can’t we fly to those continents? The reason we can’t see these realms of the suras and asuras, Mount Meru and the other human continents, is because we are blocked by karma. If we have karma to be born there, then we can see them, or if we have psychic power, like those previous arhats who could travel from one continent to another. With psychic powers they could fly to the sun and the moon, sometimes they would take other sentient beings when they had war, when the kings were fighting in India.

Once there was a big fight in the Brahmin caste called Sakya. We call the Buddha “Guru Shakyamuni” because when he took the aspect of birth, he was born to parents whose caste was Sakya, so that’s why he is called Shakyamuni.

One of his disciples, Maudgalyayana, was one of the sixteen arhats who had incredible psychic powers. There was a big war and all the Sakya caste were to be completely killed by another king, I don’t remember his name. So, Maudgalyayana tried to save some of those people from the Sakya clan. He took them with his psychic powers—I can’t remember exactly—I think he took them to the sun. However, it was their karma to die. Because the Sakyas had collective karma collected in previous lifetimes to die in that same year and at that same time, even though they were not killed by other enemies and even though the arhat tried to save them, because of this karma, they couldn’t be saved—they couldn’t escape from death. Their karma was ready, so they died.

So we can travel to Mount Meru either with our psychic power, like those arhats, or if our karma is ready, we can be born there. It’s similar to our own house— sometimes we can’t find the material things just in the front of us, even if they are there all the time. Even in our house we have the material things there, and we search the whole house, but sometimes we don’t find them. It doesn’t mean they are not there. This is also due to karma.

Then we blame other people, “Some friends came, they had a cup of tea and they went. They hung around my room; they must have taken it.” We completely believe this, because we didn’t find the material thing, and the only way we can see is that they have taken it. We are sure somebody must have taken it. Then, even their faces look black. Before, we saw them as beautiful, but now we don’t see them as beautiful. I am talking simply, giving an example. The question about seeing Mount Meru and the other continents is like this example.

The Mosquito is the Cause of Our Enlightenment
Karmic Results
Attachment to Alcohol and Drugs
The Shortcomings of Harmful Thoughts
That's the Lam-rim!
Kopan Course No. 10 (1977)
Emotional Ambition