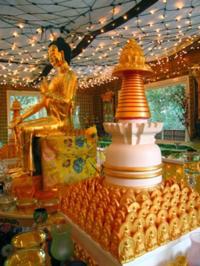 How to React to Harm in Accordance with the Dharma
Cách Ứng Phó Với Sự Hãm Hại, Phù Hợp Với Giáo Pháp
Lama Zopa Rinpoche taught on karma, explaining a verse from Bodhicaryavatara (A Guide to the Bodhisattva’s Way of Life) by Shantideva, the great eighth-century Indian Buddhist master during the 2017 month-long lamrim meditation course at Kopan Monastery. Edited by Chân Thông Tri.

The Simple Art of Meditation
Nghệ Thuật Đơn Giản Của Thiền
This talk was given by Lama Yeshe in Bloomington, Indiana, 1975. Translated by Võ Thư Ngân.

Practicing Lam-rim as a Householder
Làm Người Tại Gia Tu Tập Lam-rim
Lama Zopa Rinpoche explained how to generate the realizations of the stages of the path to enlightenment at the Twelfth Kopan Course held at Kopan Monastery, Nepal, in 1979. This teaching is an excerpt from Lecture 9 of the course.

Restaurants and Shopping
Nhà Hàng Và Mua Sắm
This was advice given by Lama Zopa Rinpoche on developing the right motivation for going to restaurants and to do shopping.

The following LYWA and FPMT publications have been translated into Vietnamese by Hong Nhu and are available as PDF files. You can access more of Hong Nhu's Vietnamese Dharma translations here.

The Preliminary Practice of Tong-len
HƯỚNG DẪN PHÁP TU TONG-LEN
This advice on the practice of tong-len was dictated by Lama Zopa Rinpoche to Kendall Magnussen in 2006.

A Short Tong-len Practice
NGHI THỨC GIẢN LƯỢC TU TONG-LEN​​​​​​​
This is a short tong-len practice compiled by Ven. Sarah Thresher on the basis of instructions from Lama Zopa Rinpoche.

The following LYWA publications have also been translated into Vietnamese and are available as pdf files:

Be Your Own Therapist, by Lama Thubten Yeshe
Hãy Là Bác Sĩ Cho Chính Mình
A talk by Lama Yeshe given in Melbourne, Australia, in April 1975. Please note: this translation has not been checked for accuracy.

On Marriage, by Lama Thubten Yeshe
Hôn Nhân
Lama Yeshe answers questions about marriage and relationships. Collated from talks in various locations from 1975 to 1981. Please note: this translation has not been checked for accuracy.

Preliminary Practices
PHÁP TU SƠ KHỞI
A compilation of Lama Zopa Rinpoche's advice on preliminaries and daily practices. This advice was translated into Vietnamese and combined with other advices from Rinpoche on daily practices by Anh Ho.