Thank you so much for your interest in and support of the Archive.

Busy Days at the Archive

Things are very busy here as we prepare six books for printing. Five are reprints of some of our most popular titles, which many of you so generously sponsored. And we’re excited about our new free book, Lama Yeshe’s Life, Death and After Death, the teachings in which will also be available on DVD. All of these books will be available later in 2010.

When Lama Yeshe’s Life, Death and After Death is published it will automatically be sent to all our Members and Benefactors. If you are not already in line to receive this book automatically, make your donation now to support our work and receive our new free books.

Move-In Date
We’ve also started the process of moving into our new home, although the major move won’t happen until October 7. We started with getting the astrologically best time and date, for which we thank Geshe Ngawang Drakpa of the FPMT’s Tse Chen Ling in San Francisco.

Then, we looked to Lama Zopa Rinpoche's procedures for moving into a new house that include a variety of prayers, text readings and practices. These were done at the new house last Saturday morning by LYWA’s Wendy Cook and Ani Desal, assisted by our Australian friend Kirra Givanni, while Geshe Drakpa did the readings in California. Then we officially entered the house at 11:00 a.m. Below is a picture of our first small altar in our new home: 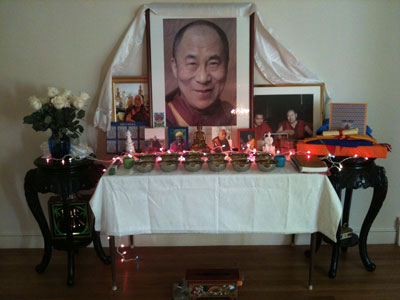 Now we start getting it ready for Lama Zopa Rinpoche, who will be staying there for a couple of days around the end of the first week of September, and then we gradually move things across (it’s less than a half-mile from where we are now) until the big move in October. 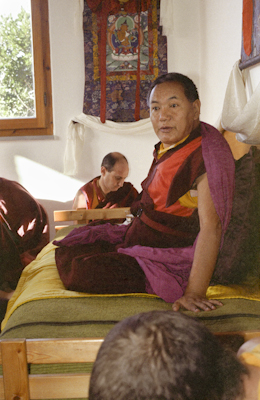 This month we invite you to browse through the best of our collection of images from 1983. We had so many pictures from this time period we had to seperate them into 6 albums! The albums are:

It's a fabulous collection, so be sure to take a look. Thank you again to all our donors and photographers for sharing their personal collections.

New on the Web
Listen online to a teaching of Rinpoche's from 1991 in Bendigo, Australia titled The Happy Path. This excellent recording covers teachings on selflessness, altruism and compassion. 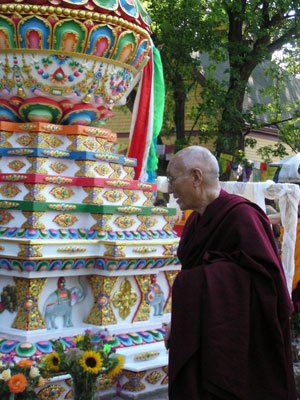 Kalachakra Stupa Update
In the meantime I’ve also been very busy in my other role as director of the FPMT’s Boston center, Kurukulla, as we have the wonderful teacher Choden Rinpoche in town giving a series of teachings and, also on Saturday, consecrating our Kalachakra stupa.

You can see pictures from the consecration and photos from the months leading up to it on Kurukulla’s FaceBook page.

We leave you with an excerpt from Lama Zopa Rinpoche's teachings from the 14th Kopan Course in 1981. Thank you again for your interest and please let us know if there's anything we can do for you. 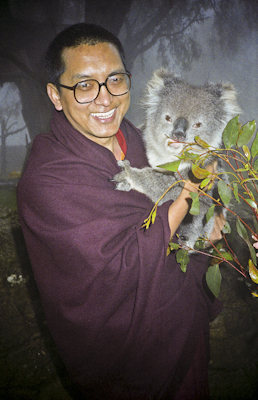 The danger of an atomic bomb is that it harms others and it can destroy the whole earth—more than half of the world—millions and millions of human beings and creatures. There are so many creatures—uncountable numbers in the water, under the ground, in the bushes and in the sky. There are so many, it is unbelievable. All this gets destroyed—not only human beings, but also creatures and so many buildings, bridges and cities. All these things that thousands and thousands of people for many years planned and spent so much money on, and worked so hard in order to collect the money to give to the workers—all these enjoyments, all the rich and comfortable apartments and the huge buildings, took so much time and effort. People put so much effort into building all this and in just one minute or one hour, it all gets destroyed. In so many of these cities, it is unbelievable how much effort people put into these things. They suffered so much to construct all this, then in one day or in one hour, it is all completely destroyed.

The danger of the atomic bomb comes from anger. If there is patience and no anger, this destruction would not happen. Even without talking about the narak realms, anger produces negative karma. Even without talking about karma, we can easily see how anger is so harmful and so dangerous. So then, if we talk about karma, it is unbelievable—when we think about the suffering result of that, there is no need to talk much. Today’s anger arises towards another sentient being, and this anger causes harm and suffering from life to life. The suffering result is experienced from life to life for a long time. Particularly if we think about karma creating a result that is similar to the cause, we understand. Because of the habit of getting angry in this life, we see that if we do not cease it in this life, again the habit comes out in the next life and anger arises, and so it goes on and on like this.

Besides the fragile bodies of other sentient beings, it destroys even very solid, concrete mountains, and makes them non-existent. So the real hero, the real bravery, is being able to face, fight and defeat the powerful, great inner enemies, such as anger, attachment and the unsubdued minds. We should face whatever is stronger in our mind—jealousy, pride or anger. If we can defeat this true enemy, the inner enemy, we are the real hero and that is real bravery.

All those leaders who have many ranks and medals due to killing—who were in a war and killed many people, and get extra colors and different materials—we think of them as brave. Especially when there is a scar somewhere on their hands or bodies where the bullet went through, we recognize them as so precious, and think of them as very important. We think of them as going down in history, with a long story, and we believe they are very important, brave and competent.

Similarly, we believe that someone who climbed a rocky mountain or a snow mountain is a brave and competent person. However, this is wrong. This person is not a real hero and it is not real bravery or real competency. Someone who is able to defeat the delusions and accomplish temporal or ultimate happiness is the real hero. The real bravery and the real hero is someone who is able to face the unsubdued mind of anger and attachment.

Kyabje Lama Zopa Rinpoche gave this teaching on anger at the 14th Kopan Course in 1981. This is an edited excerpt from Lecture 15, Section Four of the course. Click here to read more.