Kyabje Lama Zopa Rinpoche gave this teaching on anger at the 14th Kopan Course in 1981. This is an edited excerpt from Lecture 15, Section Four of the course. Click here to read more. 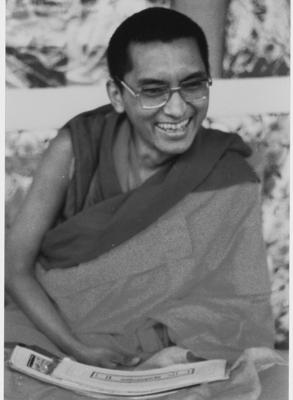 The danger of an atomic bomb is that it harms others and it can destroy the whole earth—more than half of the world—millions and millions of human beings and creatures. There are so many creatures—uncountable numbers in the water, under the ground, in the bushes and in the sky. There are so many, it is unbelievable. All this gets destroyed—not only human beings, but also creatures and so many buildings, bridges and cities. All these things that thousands and thousands of people for many years planned and spent so much money on, and worked so hard in order to collect the money to give to the workers—all these enjoyments, all the rich and comfortable apartments and the huge buildings, took so much time and effort. People put so much effort into building all this and in just one minute or one hour, it all gets destroyed. In so many of these cities, it is unbelievable how much effort people put into these things. They suffered so much to construct all this, then in one day or in one hour, it is all completely destroyed.

The danger of the atomic bomb comes from anger. If there is patience and no anger, this destruction would not happen. Even without talking about the narak realms, anger produces negative karma. Even without talking about karma, we can easily see how anger is so harmful and so dangerous. So then, if we talk about karma, it is unbelievable—when we think about the suffering result of that, there is no need to talk much. Today’s anger arises towards another sentient being, and this anger causes harm and suffering from life to life. The suffering result is experienced from life to life for a long time. Particularly if we think about karma creating a result that is similar to the cause, we understand. Because of the habit of getting angry in this life, we see that if we do not cease it in this life, again the habit comes out in the next life and anger arises, and so it goes on and on like this.

As it is explained in the Bodhicaryavatara by Shantideva, even if all the devas, the worldly gods, human beings and all sentient beings become our enemy, they could not lead us to the fire of the narak realms. Even if all sentient beings become our enemy and become aggressive toward us, they could not lead us into the fire of the narak realms. But if we meet the inner enemy, the unsubdued mind, this powerful enemy destroys whatever we need and it turns even great mountains into dust. Besides the fragile bodies of other sentient beings, it destroys even very solid, concrete mountains, and makes them non-existent.

So the real hero, the real bravery, is being able to face, fight and defeat the powerful, great inner enemies, such as anger, attachment and the unsubdued minds. We should face whatever is stronger in our mind—jealousy, pride or anger. If we can defeat this true enemy, the inner enemy, we are the real hero and that is real bravery.

All those leaders who have many ranks and medals due to killing—who were in a war and killed many people, and get extra colors and different materials—we think of them as brave. Especially when there is a scar somewhere on their hands or bodies where the bullet went through, we recognize them as so precious, and think of them as very important. We think of them as going down in history, with a long story, and we believe they are very important, brave and competent.

Similarly, we believe that someone who climbed a rocky mountain or a snow mountain is a brave and competent person. However, this is wrong. This person is not a real hero and it is not real bravery or real competency. Someone who is able to defeat the delusions and accomplish temporal or ultimate happiness is the real hero. The real bravery and the real hero is someone who is able to face the unsubdued mind of anger and attachment.