The Power of the Buddha

Kyabje Lama Zopa Rinpoche explains the power of the Buddha and holy objects, at the 14th Kopan Course in 1981. This is an edited excerpt from Lecture 14, Section Four of the course. Click here to read more. 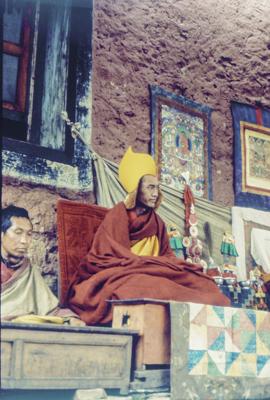 There are particular, exceptional actions done in relationship to holy objects that become holy Dharma without depending on a virtuous motivation. These actions, such as making prostrations, become holy Dharma even if we don’t see the actual Buddha. Our actions may be toward the holy objects of Buddha, Dharma and Sangha, or toward the precious holy objects of stupas, which are the signification of Buddha’s holy mind. These actions may include circumambulation or making prostrations and offerings.

Even if we are not thinking about Buddha, the enlightened being, every single action, such as offering one spoonful of food, one glass of water or a stick of incense, one tiny grain of rice or a few grains of rice thrown into space, becomes holy Dharma. Every one of these particular actions is exceptional, because it does not depend on our motivation in order to become the cause of happiness. By the power of the holy object, every single action becomes holy Dharma and the cause of the omniscient mind, without depending on the motivation—even without the motivation of bodhicitta.

Even if we look at statues and paintings of Buddha with an angry mind, this action of just looking at the image of the Buddha becomes purification. It is said in the sutra teachings by Buddha, that even if we look at an image of the holy body of the Buddha, the One Gone to Bliss, with a disturbed or angry mind, we will eventually see ten million buddhas. The karma of just seeing the figure of Buddha drawn on a wall gradually causes us to see ten million buddhas.

When Guru Shakyamuni Buddha was in India, there were two arhats who were very close disciples. One was called Shariputra. I think you must have heard the story about him from Geshe-la, when he explained that nothing is definite and relationships change from one life to the next. Shariputra saw a whole family complete change from the previous life to this life. He saw the mother reborn as a dog, the father reborn as a fish and the enemy reborn as a child in the family, by being attached to the wife.

The arhat Shariputra was always very close to Guru Shakyamuni Buddha, due to an event in one of his past lives. He was traveling and he stopped at a house, and that night he was fixing his shoe with a small light in front of him. When he got a little bit tired and took a rest, by accident somehow he looked at the wall and against the light he saw an extremely beautiful figure of the Buddha. He thought, “This is so beautiful, so beautiful. How wonderful it is. If only I could be like that.” Again he looked at the Buddha and again he generated the wish, “How wonderful it would be if I could be like that, so beautiful.” He was not particularly thinking of the omniscient mind or remembering the qualities of the Buddha. He was just thinking, “How beautiful it is. If only I could be like that.” He generated the wish again and again, and that became the karma to be able to join Guru Shakyamuni Buddha in his next life, to be able to get teachings and offer service, and to always be with Guru Shakyamuni Buddha.

Even without making offerings, just looking at an image of the Buddha purifies our unsubdued mind and negative karma. Even if we are very angry and our mind is very disturbed and we go into the meditation room or whatever it is, and we just sit down and look at a nice painting or statue of the Buddha, and we think about the way he is sitting—it is so relaxed, so peaceful, so subdued and compassionate-looking. If we just concentrate and think about that and look at the image, it is so helpful and beneficial for our mind. It brings great calmness and it subdues our mind, as we generate the wish to be like that.

Wrathful buddhas have big eyes that are open, round and wrathful, and the peaceful aspect of Buddha has half-open and half-closed eyes. This has great significance, because half-open eyes show the power of the holy action, and the power and capability of Buddha. The higher bodhisattvas—the arya bodhisattvas who have attained the tenth bhumi—can one-pointedly concentrate on shunyata or emptiness, like putting water into water. They dissolve all the views and one-pointedly concentrate on emptiness without any discrimination between subject and object, and without any view of the conventional truth. Sentient beings and even arya beings cannot concentrate one-pointedly on both emptiness and conventional truth. While an arya being is single-pointedly concentrating on absolute truth, he cannot see conventional truth, [also called the all-obscuring truth because while it is conventionally true, it obscures the absolute nature of reality]. While the arya being’s mind focuses on the all-obscuring truth, it cannot concentrate one-pointedly on the absolute truth. The arya being’s mind cannot focus simultaneously on both objects, it can only do so at different times.

Having eyes that are half-open and half-closed signifies Buddha’s holy mind. Eyes half-closed signifies one-pointedly concentrating and placing the mind on the emptiness of all existence, and at the same time, eyes half-open means seeing the all-obscuring truth with great love. Buddha sees all the sentient beings and all the different levels of mind of sentient beings—past, present and future.

The point of what I am saying is that because we wish for happiness, we should avoid laziness as much as possible and follow this infallible method to accomplish happiness. This particular action does not depend on creating a virtuous motivation with effort. It is so easy for this action to become virtue— it is so easy for it to become the cause of the omniscient mind. While we have this precious human body, we have the opportunity to accumulate as many causes of happiness as we want to create, for as many years, as many days, as many hours and as many minutes as we wish. We have the opportunity to create the causes of happiness, and we know and recognize this. We have the opportunity and the understanding, and it is so easy—it doesn’t depend on hardship—it becomes so easy to create the causes of happiness and the causes of the omniscient mind. All these things—the resultant karma and the resultant happiness—are the experience of Buddha himself. He himself has gone through this. It is also the experience of the great pandits and the great yogis and meditators. It is their experience too.