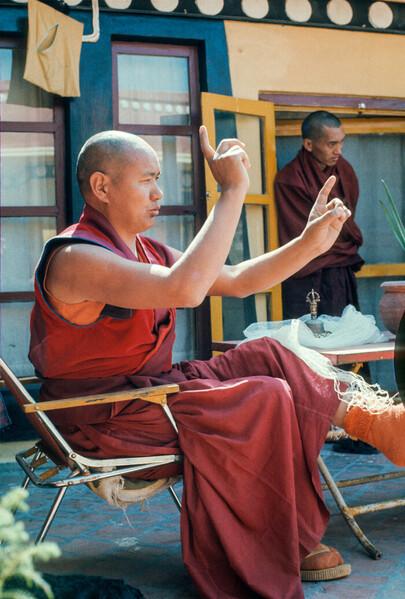 Thank you so much for your interest in the Lama Yeshe Wisdom Archive and for subscribing to our monthly eletter! Read on to see what our offerings are for the month of August. We are looking for folks to preview the forthcoming Lamrim Year companion app and we have a slice of a homemade Big Love audiobook (a work in progress) to share with you! 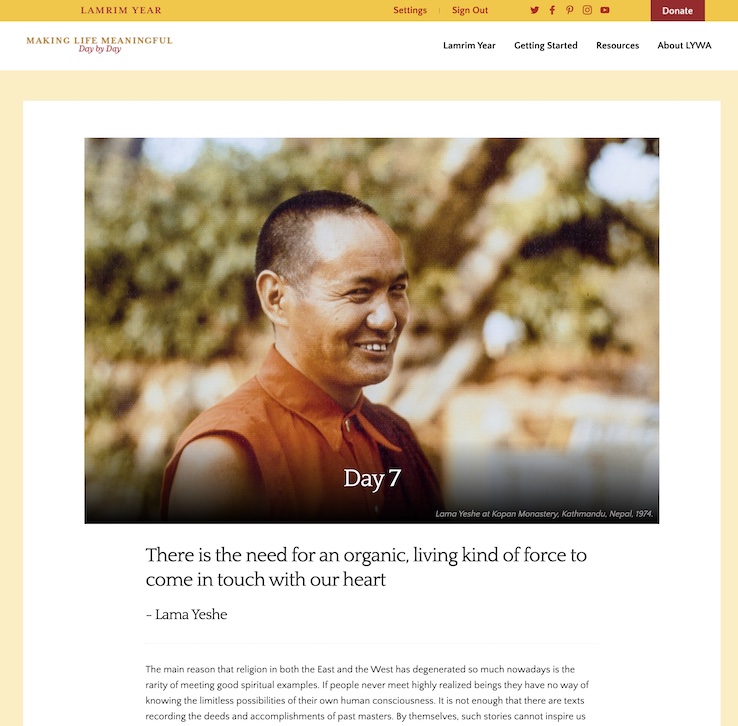 As you may know, we are putting the finishing touches on the forthcoming FREE web application based upon the very popular LYWA free book, Lamrim Year, which we published in 2021. The Lamrim Year companion app will enable you to easily access your daily lamrim contemplation anywhere on a web browser, whether on your phone or on your computer. It will help you keep track of your progress through the lamrim outline, send you a reminder email when you complete each Day that includes a handy link to the next Day’s contemplation, give you the ability to review previous Days at will, allow you to take personal notes as you go, and provide easy access to all related Lamrim Year resources for more in-depth study. We are planning for a mid-September launch.

Would you like to help us by previewing the app? If so, please send us an email indicating your interest and we will be in touch. If you are already in the midst of working through Lamrim Year, we can set you up to continue from whichever Day you’re on. Thank you so much for all your help!

From the Video Archive: The Foundation of Universal Responsibility

This month from the video archive Lama Zopa Rinpoche describes the power of universal responsibility and encourages us to practice compassion with those around us to bring happiness to all sentient beings. This teaching is from a public talk given by Rinpoche in Brisbane, Australia on September 4, 1991.

On the LYWA Podcast: The Qualities of the Dharma and Its Teachers 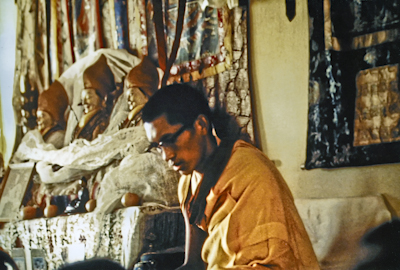 This month on the LYWA podcast Lama Zopa Rinpoche describes the qualities of the holy Dharma and those qualities of the holy beings that teach it. This teaching was given during the Fourteenth Kopan Meditation Course at Kopan Monastery in Nepal in 1981. You can read along with the transcript here on our website. 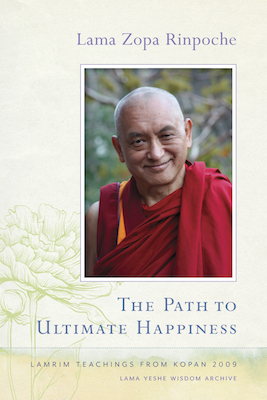 This month we have posted two books on our website: Enjoy Life Liberated from the Inner Prison, Lama Zopa Rinpoche's advice to prison inmates, edited by Ven. Robina Courtin, and The Path to Ultimate Happiness eBook, an ebook based on teachings Lama Zopa Rinpoche gave during the 42nd Kopan lamrim course in 2009 at Kopan Monastery in Nepal.
In an effort to make our free audiobooks more widely available, especially for those of you unable to access Google Play, we are now offering them on the LYWA Youtube channel. Our first offering in this format is Teachings from Tibet: Guidance from Great Lamas. Please let us know what you think! 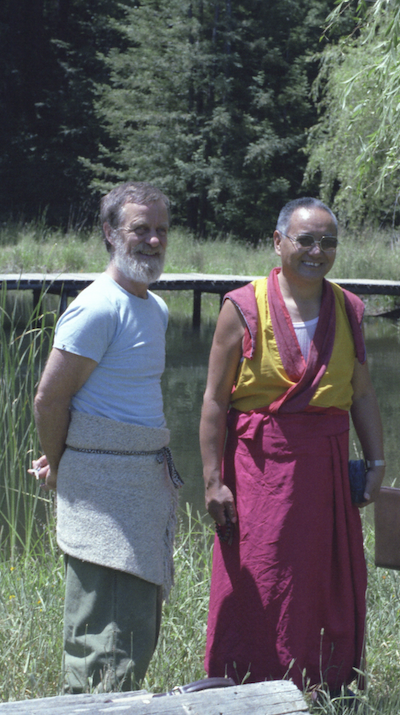 We are working on an audiobook version of Big Love: The Life and Teachings of Lama Yeshe, based on narrations recorded by a group of friends of the late Åge Delbanco (Babaji), who was one of Lama Yeshe’s earliest students. He was in his 90s when the book was published and was having trouble with his eyesight, so his kind friends decided to record it for him, but he passed away before it could be finished. With those friends, we are finishing it and gradually bringing it to you.

This month we offer you the first Big Love audio installment with Jonathan Landaw’s narration of the forewords by His Holiness the Dalai Lama and Lama Zopa Rinpoche. Jon, one of Lama’s heart students, also wrote the introduction to Big Love, the audio of which will follow soon. 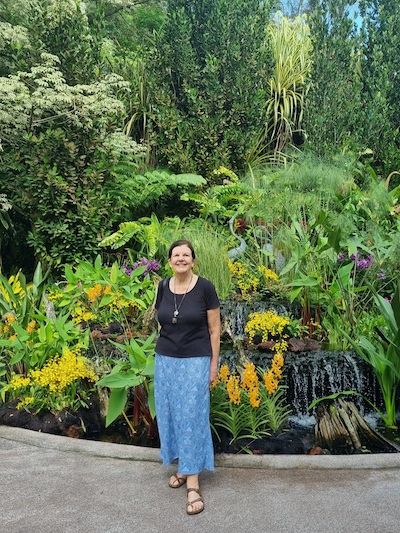 LYWA editor Sandy Smith travelled to Singapore from Australia to participate in the event. “I didn’t want to miss this rare opportunity to receive teachings and initiation directly from Rinpoche, after the long hiatus due to the pandemic,” she said. “I will return home re-energized, inspired by the strong practice and devotion of local and international students who have gathered together at ABC Singapore."

Thanks again for your interest and support. We couldn’t do it without you!

THIS MONTH'S TEACHING: ANXIETY IN THE NUCLEAR AGE 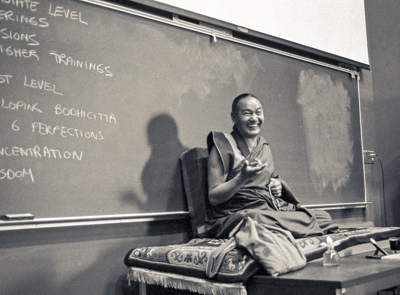 When we talk about nuclear war, we’re not just talking about bloodshed, the killing of people. I heard that in America tens of thousands of people die on the roads every year. That looks like a tremendous number of people, and it is, but when it comes to nuclear war, that’s much more dangerous; it’s very serious. A nuclear explosion can release millions of tons of energy. For example, if the Soviet Union were to fire a nuclear missile into the center of San Francisco, the effect would be felt for hundreds of miles in every direction and millions of people could be killed or seriously injured. Medically it would an almost impossible situation to deal with, and a vast area would be left uninhabitable for a very long time. It would be an environmental catastrophe. The after-effects on just the human population are too terrible to even contemplate. So, people have good reason to be concerned, fearful and anxious. I understand that. The potential for all this to happen does exist.

However, from the Buddhist point of view, nuclear war has an evolution and we have explanations as to how and why it exists. Simply put, we can talk about internal nuclear war and external nuclear war. The internal aspect addresses why such weapons have been made—people’s motivation for making them. Before nuclear missiles existed, the human mind speculated and projected in that direction. People were serious; these kinds of weapon were not a joke. People wondered, “How can we protect ourselves? What sort of equipment do we need in order to win a war?”

Then military experts began pushing for the creation of such weapons, explaining to politicians why there was a defensive need for them, and thus the arms race began. In America, people tend to blame the president for escalating the arms race but in my superficial view, I don’t think he’s primarily responsible. There are people behind him, those who feel responsible for the country’s peace and freedom, such as the army generals, pushing the president, saying things like, “If we don’t have these weapons, we can’t guarantee that we can do our jobs.” I’m sure you know all this already, but be careful who you blame for what. You have to analyze things carefully and truthfully.

We all say that we dislike harming others and try to protest the development of nuclear and other weapons, but it’s already reached beyond our control. Even though we mean well when we protest and do many other things to try to stop the production of nuclear energy, it’s too late. It’s not worthwhile. It doesn’t matter. They’re going to produce nuclear power and weapons anyway. All these things will keep popping up like mushrooms.

What we can do, however, is try to educate people not to use nuclear energy in a harmful way. That is something we can do. Undertaking unreasonable actions will not produce the desired result. It’s difficult. The fact is that nuclear energy is here to stay; it’s a reality. So the best we can do now is to understand the dangers of nuclear war and try to educate people as to those and turn them against the use of nuclear weapons. That, I think, is our responsibility.

Just being anxious and fearful is not going to help. That cannot stop the problem. Furthermore, the anxious, emotional, disturbed mind within you is also highly destructive. What it produces is hatred, and that itself is an internal nuclear war. So that’s what I’m saying. When you harbor hatred, you’re waging an internal nuclear war, whether you’re aware of it or not, and in that way, nuclear war has already begun to manifest in the world.

From there, it then appears in your speech, when you start to discuss fighting. Just listen to the radio; you can see. You don’t need any higher education. Of course, this is just my observation. I’ve listened to Russian radio; I’ve listened to American radio. That’s been enough. You can feel the vibration. So war is there, in thought and speech. What hasn’t manifested yet is physical war, the expression of that thought and speech. So how do we control the physical use of nuclear weapons?

From the Buddhist point of view, it’s the mind that has to be controlled. Therefore, we have to educate people as to how to control their mind. People have to guarantee not to touch weapons or harm others. Otherwise, how can these things be stopped?

We all have knives. There are knives in every home, every kitchen. Potentially, we could already be killing each other. We’re all armed. What stops us from using those knives to kill other people is control; control of the mind. Since hatred is the real, internal nuclear weapon and manifests externally as physical war, we need to eliminate hatred as much as we can.

If we check up honestly where our anxiety comes from, we’ll find that “I’m scared of this, I’m scared of that” boils down to “I’m scared; I’m scared.” We’re projecting ourselves as something very concrete: the self-notion; the self-concrete self-entity. The me is afraid; the me is the most important thing; the me should not be harmed by nuclear arms. Buddhism would call this basic thinking the selfish attitude, self-cherishing, and the result of following it is always restlessness and misery.

So basically, anxiety manifests from the ego and the notion we have of ourselves as something concrete; an unrealistic projection of what we are. That is the cause of anxiety. There is no such thing as the concrete concept we have of ourselves. Inwardly, externally, it is totally nonexistent. It’s only a projection. If we could only recognize that, we’d be able to relax and all our anxiety would be eliminated.

Lama Yeshe gave this talk at the University of Santa Cruz, California, in July, 1983, following a talk on the same topic in Berkeley a few days earlier. Excerpted from Knowledge-Wisdom: The Peaceful Path to Liberation, Collected Teachings, Volume 1, forthcoming from LYWA early 2023. Edited by Nicholas Ribush.