Anxiety in the Nuclear Age DVD 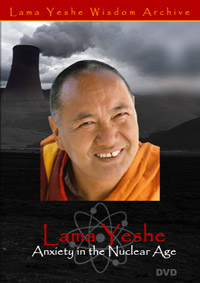 In January 2007, the Bulletin of Atomic Scientists (www.thebulletin.org) moved the minute hand of the Doomsday Clock forward two minutes, to five minutes to midnight, the figurative end of civilization, citing the perils of the earth's 27,000 nuclear weapons—2,000 of them ready to launch within minutes—as one of the main reasons for doing so. They said "We stand at the brink of a Second Nuclear Age. Not since the first atomic bombs were dropped on Hiroshima and Nagasaki has the world faced such perilous choices."

In two public lectures in California in July 1983, Lama Yeshe addressed the perils of the First Nuclear Age, exacerbated at that time by the Cold War and Americans' worries over the Soviet nuclear threat. Although the nature of our current concerns is different, Lama's observations and insights are as relevant today as they were when he first made them and we are honored to bring them to you on this DVD.

You can also watch both of these videos on Youtube or experience the Berkeley talk in multimedia format. Both teachings have now been fully edited by Nicholas Ribush and published in the LYWA free book Knowledge-Wisdom: The Peaceful Path the Liberation.