Teachings from the Mani Retreat

"Because we have met the Buddhadharma, and especially this method—the practice of the Compassion Buddha and recitation of his mantra—it is easy to purify negative karma and collect extensive merit and thus achieve enlightenment. We are unbelievable fortunate."
— Lama Zopa Rinpoche, from his invitation to join the retreat.

This title is out of stock, but you can find links here to the ebook version. 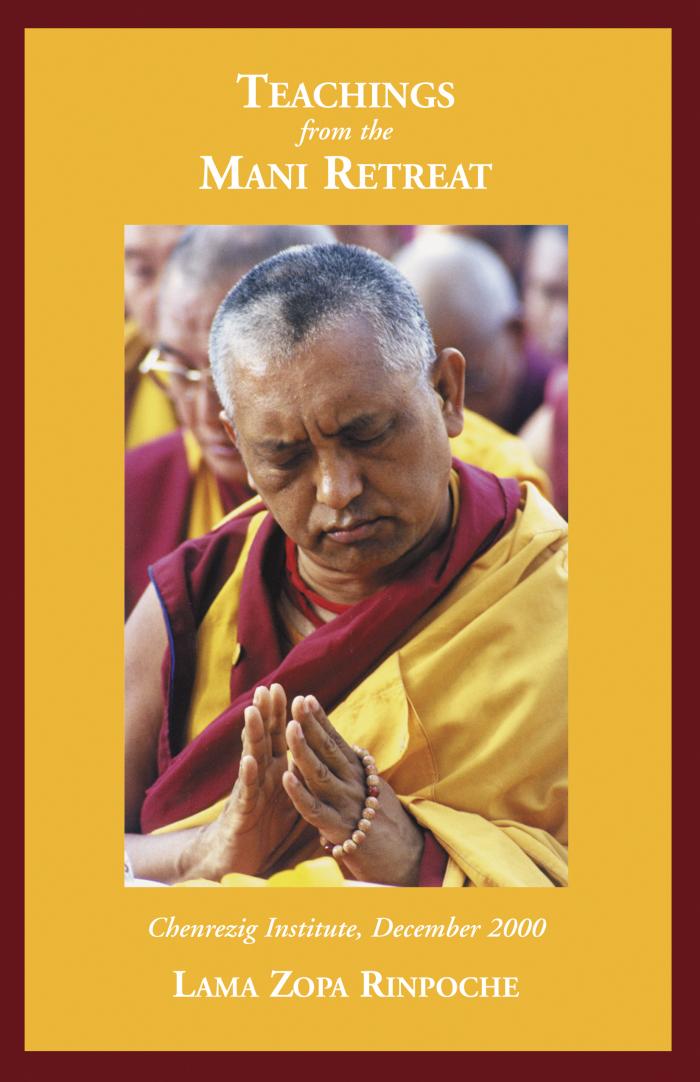 Teachings from the Mani Retreat: Preface

This book is an edited transcript of teachings given by Lama Zopa Rinpoche from December 22 to 26, 2000, as part of the inaugural Mani Retreat at Chenrezig Institute in Queensland, Australia.

Rinpoche first mentioned the idea of organizing a retreat at Chenrezig Institute to recite one hundred million OM MANI PADME HUMs in March 1999 during the Vajrasattva retreat at Land of Medicine Buddha in California. After mentioning that he would like to organize such retreats in ten different countries, Rinpoche went on to say, “I thought one retreat could happen at Chenrezig Institute in Australia, but I am not sure. It might be difficult. People could recite the mantras individually, but it might not be so easy for them to recite the mantras in a group for a long time.”

When Rinpoche visited Chenrezig Institute in April 2000, however, it became obvious that, difficult or not, such a retreat was to be organized. After introducing the idea of having a Chenrezig Celebration each year in which extensive offerings would be made to the large Chenrezig thangka currently being painted by Peter Iseli, Rinpoche said, “I would like Chenrezig Institute to organize every year the reciting of one hundred million OM MANI PADME HUMs. There are many FPMT centers here in Australia, but since this center has the name ‘Chenrezig Institute,’ I would like the hundred million manis to be organized here.”

Because of the busy study program at Chenrezig Institute, it was decided that the retreat could only be held over the summer break—not a very appealing prospect as Queensland summers are hot, humid and filled with biting insects. With this in mind, the gompa was screened and new ceiling fans installed. The task of actually reciting one hundred million OM MANI PADME HUMs seemed impossible. Even if the retreat ran for one hundred days, one million mantras would need to be recited every single day. In any case, it was decided to begin the retreat on November 26, 2000, and end it on the morning of lo-sar (Tibetan new year’s day), February 24, 2001.

Prior to the start of the retreat, Rinpoche sent further advice on the actual structure of the retreat and an invitation to join the retreat (see Prologue). Rinpoche suggested that the Eight Mahayana Precepts be taken each morning, that the first session be the Combined Jorchö and Lama Chöpa Puja, and that the mani sessions be based on the Nyung-nä Sadhana, with prostrations to the Thirty-five Buddhas and recitation of a lam-rim prayer as preliminaries. Extensive dedication prayers were also to be made at the end of the final session of the day. In addition, Rinpoche suggested that one thousand water bowls be offered each day (or at least a minimum of twenty sets of offerings).

Once the retreat started it quickly became apparent that we couldn’t hope to recite one million manis each day. By the time Rinpoche arrived for his eagerly anticipated visit late on December 20, we had recited a total of just four million mantras. After a rest day, Rinpoche began attending many of the retreat sessions. Initially he observed closely what was happening and scribbled down notes about suggested improvements. Over the subsequent days he finetuned the retreat, shortening the time spent on prostrations (to everyone’s relief!), adding prayers and motivations and suggesting different tunes for some of the chants. The practice became richer and deeper. Because many new people with no prior knowledge of Buddhism joined in the retreat, Rinpoche also took time to introduce them to some of the practices involved.

In the final session that Rinpoche attended, he mentioned how much he had enjoyed participating in the retreat: “I enjoyed the sessions I attended here very much. I think this practice is really fantastic. It is something that you find more and more inspiring—not something that becomes more and more boring. The more sessions you do, the more inspiring it becomes.” While sad that Rinpoche could join us for only a short period, we continued the retreat with fresh inspiration and insight. Before he left, Rinpoche extended the period of mantra recitation to Saka Dawa, June 6, 2001, and also gave permission for manis to be recited at home.

By the end of the retreat in the gompa, just over twenty-five million manis had been recited. More than ninety people attended the final session of the retreat and then enjoyed a sumptuous breakfast in the Lama Yeshe Big Love Café.

I would like to thank Rinpoche for his infinite kindness and compassion, and especially for participating in the Mani Retreat and giving the inspiring teachings contained in this book. I would also like to thank Chenrezig Institute for hosting the retreat; the organizing committee for planning the details of the retreat; the benefactors and sponsors who supported the retreat; Ven. Connie Miller of the FPMT Education Department for her dedicated efforts in preparing the booklets Combined Jorchö and Lama Chöpa Puja, Lam-Rim Prayers and Dedication Prayers for use during the retreat; all the nuns of the Chenrezig Nuns’ Community for sustaining the retreat and offering thousands of water bowls, but especially Vens. Margaret McAndrew, Tenzin Tsapel, Tenzin Namdag, Tenzin Chödron, Thubten Jinpa and Thubten Dechen for their skill and dedication in helping lead the retreat sessions; and everyone who participated in the retreat.

May all the merit from the Mani Retreat and the publication of this book be dedicated as directed by Rinpoche in a letter to His Holiness the Dalai Lama:

Also, may Lama Ösel Rinpoche be able to benefit sentient beings and spread the Dharma like Lama Tsongkhapa, by showing the same qualities as Lama Tsongkhapa.

Please guide us, the students of the FPMT, and especially the people who recite the mani mantras, in all our future lifetimes without separation from you, Compassion Buddha.