Kyabje Lama Zopa Rinpoche gave these teaching at Chokyi Gyaltsen Center, Penang, Malaysia, from February 2-4, 2009. The teachings include oral transmission of Lama Tsongkhapa Guru Yoga and the Three Principal Aspects of the Path.

Read Lama Zopa Rinpoche's teachings on Lama Tsongkhapa Guru Yoga, an edited transcript of teachings given in Dharamsala, 1986. See also the root text Three Principal Aspects of the Path and a commentary by Pabongka Rinpoche. 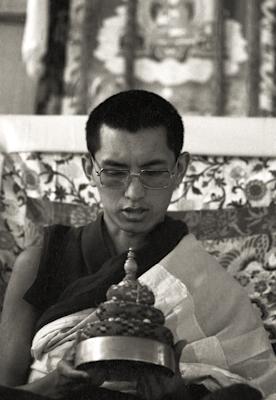 This is the nine round.

Three, four, five, no, five round. I said four, but it’s five. Okay, the migtsema.

It is said that migtsema is the heart of 84,000, this mig me tsa wäi…jam päi yang, so even the four, gang chän…söl wa deb, however, this is the heart, the very heart of the 84,000 teachings of Buddha. And it is said, and this is said, much more profound even the very profound tantra, it is said by Kyabje Chöden Rinpoche. It’s something very, very important, okay.

So now the, the requesting prayer.

[Rinpoche gives oral transmission of Three Principal Aspects of the Path to Enlightenment].

Due to all the three-time merits collected by me, three-time merits collected by others, may I, one’s, your family members, anybody who has connection to you, and then, and all sentient beings, can say that, okay, all the students, all the, everybody here, all the students here, and all the students in all the FPMT, okay, all the staffs, and then, so many people in different parts of the world, East, West, who offer service to the organization, okay, bear so much hardships, and then those who rely upon, whom I promised to pray, whose name is given to me, then may all of us, all sentient beings, okay, be guided by Lama Tsongkhapa, being Mahayana guru, directly, okay, and then never be separated away from the pure path that’s admired by buddhas.

So, the second one is, “Due to all the three-time merits collected by me, collected by others, may I, then, I mean, also means others, family members, others, you can include, students, in the organization, anyway, to be able to keep in pure morality, have extensive listening Dharma, train the mind in bodhicitta, and pure conduct, pure conduct and view, and develop, the Lama Tsongkhapa teachings, preserve and spread without corruption, so that.”

Then now, last one, third one is, “May I never arise heresy, even for one second in the actions of the guru, and whatever action done, may I be able to see only pure. And then with this devotion, may the blessings of the guru be entered in my heart.”

So in our life, in our life, something like this, Lama Tsongkhapa Guru Yoga, or, if you’re unable to do this, then, if you have received a Highest Tantra initiation, you do Six-Session Guru Yoga, or either with that, if you don’t have time, then, either with the Six-Session Yoga, or, before the guru absorb, you do the lam-rim, lam-rim prayer, either Foundation of Good Quality, or there are different, Calling the Guru From Afar, the Pabongka, so that’s, but if you can do with the Lama Tsongkhapa, the extensive Guru Yoga, Lama Chöpa, that might be difficult, so, of course, if you’re somebody who has time, who is able to do that, of course, unbelievable, but at least Lama Tsongkhapa Guru Yoga, or, then, if you can’t do that, even Six-Session Yoga, or if you haven’t taken initiation, then you can do the Lama Tsongkhapa Guru Yoga, then you do the lam-rim prayer, so the holy object that whom we pray, the guru yoga, the guru yoga practice. On the basis of guru yoga practice, then you do lam-rim, do the direct meditation on lam-rim, go through, and then, as much as possible, mindfully. But if your mind is not mindful, then, then even difficult to leave positive imprint on the mind, so as much as possible to ?effort mindful. So even you don’t understand, it doesn’t matter, but still leaves positive imprint, even you don’t understand.

So first one is the guru yoga, the meditation how to devote to the virtuous friend, so, there’s outline in the lam-rim, so you follow the outline, so, on that. Then the other one is the from perfect human rebirth, from perfect human rebirth. So, I mentioned also there, Losang Drakpa Center, I think Losang Drakpa Center or, don’t remember, or maybe Singapore, I’m not sure. Anyway, so, if you haven’t studied lam-rim, you must read the lam-rim from beginning to the end, read, then, anything that you don’t understand, you buy a notebook, write down, then later, with the elder students or the, when Geshe Tenzin Zopa comes here, okay, so can, when there’s discussion, however, then can go through that, so you can learn like that. So, so first it’s good to read the whole thing, if possible two or three times, then, at least even one time read well, not trying to finish quickly but it’s just to understand, okay.

Then, basically, one year, for one year, from perfect human rebirth up to karma, try to meditate on those. When you reach karma, go back again, so that, within one year, try to have renunciation, try to have, try to achieve the first Dharma, renunciation to this life.

Then, next one, the graduate path of the middle capable being: the general suffering of samsara, particular suffering of the deva, human realms, all those parts, and then evolution of samsara, the twelve links, all that, the shortcomings of delusion, so, another year for that, train the mind, meditate on that, every day, whatever, so, fifteen minutes, I mean, ten minutes, fifteen minutes, half hour, one hour, whatever, so, there’s nothing fixed.

So, so one can, then third year on bodhicitta, fourth year on emptiness. But, I’m talking about here main focus, it doesn’t mean you can’t meditate on others.

So, have some lam-rim meditation a day is so good, that, that is the real, that is the real thing in the life, real, the real thing in the life, really protecting you, bring yourself to enlightenment, liberating you from oceans of samsara, bring yourself in enlightenment. So some meditation, even it’s a short time is, still it’s so good, than nothing. So if one do nothing, then the whole life goes like this. I mean, if you have, I don’t know, thirty years, forty years, how much one has, or twenty years, I mean, one year, I mean, anyway, not long, short, few months, few weeks, whatever, life is very short. So then, then the whole life goes like this, then one day, suddenly death came [snaps fingers], suddenly death came [snaps fingers], nothing get done, no practice get done, no realization, not even close, not even didn’t make closer to have, achieve realization, training, didn’t do that. So finished, life is gone, finished. This one time opportunity we have is gone, just about one time. Also, like that. So, then, how much sad, you have no time, so, like that. So therefore, then, very, very good to do some meditation this.

So little bit on the guru devotion until you have stable, stable realization of guru devotion, so no matter how long it takes time, how many years, so until you see one buddha is all the guru, one guru is all the buddha, from bottom of your heart, no question, that understanding, that realization, stable, not just a few days, not just a few hours, but stable, very stable, so until you have that experience, effortless experience, without need to think of the reasons, you just discover, you just, this experience there, very deep, strong, like that.

So, like that, then, then before going to bed, umm, uh, first thing in the morning you feel happiness that you didn’t die, life, up to now, and didn’t last night. So many people in this world died, even in Malaysia, last night, people died, so many people in this world died. But I’m able to have a human body, human rebirth, to practice Dharma, every second this body, having this human body is like numberless wish-granting jewels, like wish-granting jewel, okay, think like that.

Then the, then one can think of the shortcomings of self-cherishing thought, benefits of cherishing others, okay, then you think of tong-len, exchanging oneself for others. With this meditation, you can chant OM MANI PADME HUM, then you get done your commitments with this meditation of tong-len, with the special bodhicitta practice, brave heart, taking other sentient beings’ suffering and causes, giving your, all the merits, happiness, to other sentient beings, everything, so can do that.

So for the center here, just, the Guru Shakyamuni Buddha thangka, for, to collect merits and for purification, for making offerings. And then that Medicine Buddha, is there Medicine Buddha, what’s that? The white one? What statue is that?

Rinpoche: Medicine Buddha, it’s a very nice one to make, to collect merits by making offerings, so forth, okay. So I think... [someone talks with Rinpoche in Tibetan]

Student: So we do the thanksgiving mandala offering.

Lam-rim dedication, so, to complete path within us, and spread to the sentient beings.

Offerings to the Guru »
+ View All Teachings