Ganden Lha Gyäma: The Hundreds of Deities of the Land of Joy

In this commentary, Lama Zopa Rinpoche teaches on the Ganden Lha Gyäma practice, often translating the Tibetan verses line-by-line. The teachings were given by Kyabje Lama Zopa Rinpoche at Tushita Meditation Centre, Dharamsala, India at the end of the Second Enlightened Experience Celebration held in March 1986. 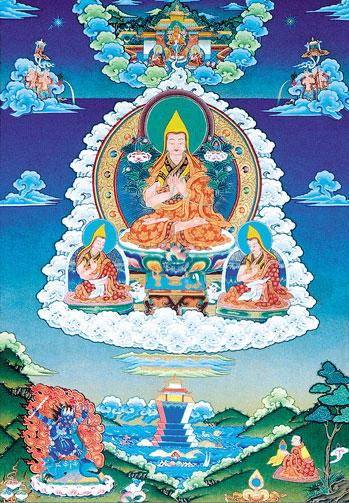 The subject matter of these teachings has been rearranged and collected under various topics. During the process of rearrangement and editing, material may have been lost and mistakes in interpretation been made—for this the editor apologizes. The material in the chapters titled Mandala Offering, Prostrations and Water Bowl Offerings is separate from the seven-limb practices within the Ganden Lha Gyäma chapter because it contains detailed instructions for performing ngondro, preliminary practices.

The prayers in this commentary have been updated according to FPMT’s Lama Tsongkhapa Guru Yoga practice booklet (2017 edition), and FPMT Retreat Prayer Book (2016 edition). Lama Zopa Rinpoche translated many of the verses and Tibetan terms in these teachings. Rinpoche’s original translations are enclosed in quote marks and set out beneath the latest FPMT versions of the prayers, which are indented in the text.

In the transcript, Lama Zopa Rinpoche frequently refers to His Holiness the Dalai Lama's Lama Chöpa (Guru Puja) commentary. His Holiness gave this teaching during the Second Enlightened Experience Celebration, the same event that preceded Lama Zopa's teaching here. His Holiness' teachings are published by Shambala Publications as The Union of Bliss and Emptiness. Rinpoche also refers to the text titled The Essence of Nectar. You can find the root text, along with Geshe Rabten's commentary in The Essential Nectar, published by Wisdom Publications.

Read a biography of Lama Tsongkhapa on our website here.