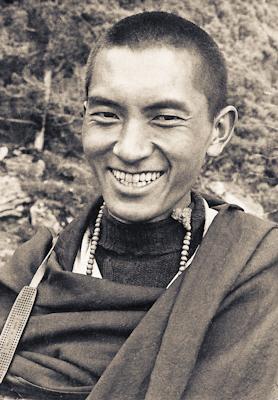 As I started collecting material for this book, the World Cup was drawing to a close. For somebody living in England (or many of the other countries participating), for over a month it seemed as if nothing in the world existed except football. Red-and-white English flags were everywhere and national pride was vociferous and, as it turned out, unjustified.

A year earlier, I was among four hundred people who took part in the hundred-million mani retreat in France with Lama Zopa Rinpoche. It was quite an experience. If you have ever done an extended retreat with Rinpoche, you’ll know that there is a lot of Dharma and not much sleep, and we all knew from the beginning that Rinpoche wanted us to complete the seemingly impossible recitation of a hundred million OM MANI PADME HUM mantras. Some of us started the retreat with a degree of trepidation. And so it is significant that Rinpoche’s very opening words were those that start the first chapter of this book, explaining that the real reason for joy is having this precious human body, not kicking a ball into a net.

But Dharma isn’t just retreats; everything we do can be Dharma. (I can’t quite see how supporting a particular football team would qualify, but I’m sure it can.) And it all stems from understanding our true potential. That is the essence of the teachings on the perfect human rebirth.

Generally, when the graduated path to enlightenment (Tib: lam-rim) is presented to Western students, the subjects are listed as a step-by-step instruction manual on how to be completely happy and attain enlightenment, with each subject being given equal weight. While this may be true, it is instructive to see how the traditional Tibetan texts divide the lam-rim. In Lama Tsongkhapa’s seminal Great Treatise on the Stages of the Path to Enlightenment (Tib: Lam-rim Chen-mo) and the works by other authors that follow his structure, after establishing the lineage and talking of the importance of the teacher and the meditation session, the main body of the work is divided into two: appreciating the human life of freedom and richness and how to take advantage of such a life. From this we can see that understanding and appreciating the perfect human rebirth is pivotal to the entire spiritual journey. As Lama Zopa Rinpoche says, it is the key that opens the door to understanding.

I think this is especially true for the Western student, because one of our greatest demons is lack of self-worth, or low self-esteem. Amid a lifestyle that is so comfortable and supportive but at the same time so competitive and goal-oriented, we can feel inadequate, even worthless. We are so busy that we miss the essential point of why we are busy. The teachings on the perfect human rebirth are a wake-up call. Through them we can see just how unique our situation is and how remarkable our potential is. When we can truly see this we will have the momentum to really develop our mind, which is the purpose of the rest of the subjects of the lam-rim.

Quite early in the piece, the students of initial month-long meditation courses led by Lama Zopa Rinpoche at Kopan Monastery recognized the importance of recording Lama Yeshe’s and Lama Zopa Rinpoche’s teachings in full, and over the decades we have collected almost 2,000 teachings—ranging from a single evening’s discourse to a full three-month retreat. This collection was formalized in 1996, when Lama Zopa Rinpoche established the LAMA YESHE WISDOM ARCHIVE. In 2007, Publishing the FPMT Lineage commenced, a project to make Rinpoche’s lam-rim teachings available. The aim is to extract the individual lam-rim topics from all the teachings recorded and assemble, edit and publish them in a series of detailed commentaries. Until now, the ARCHIVE has generally published edited teachings of one particular course or teaching, but with the books of FPMT Lineage series we will offer a comprehensive presentation of everything Rinpoche has said on each lam-rim topic.

The Perfect Human Rebirth was created in this fashion. Having collected as much of Rinpoche’s teachings on perfect human rebirth as possible, I assembled them into topics. Then, using the outline from Pabongka Rinpoche’s Liberation in the Palm of Your Hand, the structure that Lama Zopa Rinpoche followed in his early courses, I built a template from the various teachings given by Rinpoche at Kopan Monastery, Kathmandu, in the one-month lam-rim courses he gave every year. I then trawled the entire ARCHIVE to find whatever else Rinpoche had said on the perfect human rebirth and added it to the template.

The whole text was then edited. I have tried to keep the informal, experiential style that Rinpoche uses and have included many of the anecdotal and almost parable-like stories that often pepper his discourses.

The edited text comes from verbatim transcripts that have been checked for accuracy, so we can be confident that what is here is exactly what Rinpoche has taught. Mistakes and confusions belong one hundred per cent to the editor. Taking it from so many sources, with Rinpoche teaching to different audiences at different times, it is inevitable that no matter how much I have tried to avoid repetition, there will be some sections that reflect others. Hopefully these will serve to reinforce the message rather than create any sense of tedium. Textual quotations should be regarded more as paraphrase than word-for-word translation. When Rinpoche cites a text I have listed it in English only, the one exception being the Lam-rim Chenmo, which is better known to many people by its Tibetan title than the much longer English one. For the Sanskrit or Tibetan titles of other works, please see the bibliography.

In all, more than 140 of Rinpoche’s courses around the world constitute the source material for this book.1 How many hours of labor does that represent for all those many people involved? And how many people have actually been involved in the creation of this book? I can’t start to name names; there are just too many. All I can do is offer each and every one of you who have given so much a huge thank you.

But most of all, I wish to thank from the bottom of my heart Lama Zopa Rinpoche, the inspiration for all this, the source of all this incredible knowledge. To me he is the living example of how one person can make a huge difference and how everything is possible when one’s mind is imbued with compassion and wisdom. May whatever small merit gained from the creation of this book be dedicated to his continued long life, good health and the attainment of all his holy wishes.