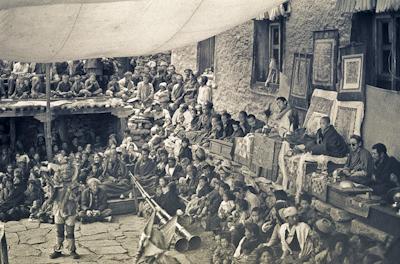 Chapter 2.4: The Freedom of Not Being Born as a Long-life God

The next freedom is that of not being born as a long-life god. “God” in this context does not mean a buddha, one free from ignorance. These are worldly beings who are still ignorant, and although their lives are full of pleasure that we could not even imagine, they are still not free from suffering. They are called gods because their enjoyments are so much greater than ours. For example, desire realm gods can have thousands of goddesses. They live on nectar; their food is not like ours, which must be harvested and makes kaka. Their bodies shine with light and their clothes are exquisite. They live in unbelievably beautiful palaces made of lapis lazuli with beams made of jewels and so forth. Even the ground is like lapis and they can see their own reflection in it as they walk. Their possessions are so precious that one earring is more valuable than the combined wealth of our world system.

The gods of the form and formless realms have renounced the sense pleasures of the desire realm and have attained great peace through profound concentration. The gods of the formless realm don’t even have a body, just a consciousness. There is no suffering of suffering or suffering of change, but they are still not free from pervasive compounding suffering. They live for eons but are really only aware twice: as they are being born they have the thought, “I am being born as a god,” and when they die they have the thought, “Now I am dying and leaving this rebirth as a god.” In between they stay in a concentration that is like a deep sleep, lacking in any wisdom or discrimination, so it is virtually impossible to practice any Dharma at all.

The world of the desire realm gods is free from the problems that we experience—having to work to feed ourselves, having to expend energy being comfortable and happy. Every pleasure comes to them effortlessly. With all this luxury, their minds are constantly distracted by sense pleasure and they have no thoughts other than what to experience next. We can see this a little bit in our own life, where we can easily be distracted from meditation by thoughts of the new car or computer we want to buy or the movie or restaurant we’re going to that night.

The gods are so overwhelmed by pleasure that they have no way of knowing the nature of suffering and no way to practice Dharma. Kopan students often say that when they return home their ability to practice Dharma slips and can even get lost altogether because of the distractions that once again fill their lives. But these distractions are nothing compared to those of the gods.

There is the story of one of Shariputra’s disciples, a doctor who became a long-life god.26 Before his death he was very devoted to Shariputra. If he was riding his elephant and saw the arhat walking along the street he would immediately jump off and bow down before his teacher with much love and devotion. After the doctor died, Shariputra saw with his psychic power that he had been reborn in the god realms and went there to give him more teachings. However, when the doctor saw Shariputra this time, he was so intoxicated by the pleasures of the god realm that he simply raised a finger in recognition and then ran off to play with his friends. He had no time to listen to Dharma and no time for his old guru.

The main problem, of course, is attachment. Material possessions bring with them attachment, and with attachment comes the mind that always wanders to the object of attachment. This becomes a huge distraction when we try to practice Dharma. If, however, we could be free from attachment, it wouldn’t matter how many wonderful possessions we had; they would not be able to distract us.

This is the problem of the god realms. Even if the gods could hear the Dharma, they would not be able to make use of it because they are so obsessed with pleasure. It is said that a few gods in the Thirty-three Realm at the very top of Mount Meru27 do actually get to hear the Dharma by hearing a big drum that is beaten on certain days. Just as animals benefit from the sound of mantras without understanding anything, the gods respond to the sound of the Dharma drum and receive some limited benefit. Other than that, most gods have no opportunity to hear the Dharma at all.

Seven days before a god’s death—and each day in the god realm is fifty human years—a karmic voice tells the god he is going to die. Then everything decays. For the whole of the god’s life there has been no dirt, no unpleasant smell, nothing in his world that was anything other than pleasure. Now, suddenly, things change. His body gets dirty and smells; it loses its radiance and becomes quite ugly. He becomes dissatisfied with his bed and, no longer able to relax, is unable to sleep in it. The flowers around him, which have remained perfect his whole life, wilt and die. His friends, who have always only been there to amuse him and give him pleasure, are repulsed by these changes and shun him. He is terrified and totally alone.

Due to karma he is then able to remember past lives and, even worse, see his future life. He sees that his karma to be a god has finished and that within seven days he will be reborn in the lower realms. The suffering he experiences as a result of this knowledge is worse than actually experiencing the hells.

It is easy to see that as a hell being, hungry ghost or animal it is almost impossible to create any virtuous action, but also as a long-life god—either in the desire realm distracted by pleasure or in the form or formless realm absorbed in concentration—it is extremely difficult to see the nature of suffering and therefore extremely difficult to practice Dharma. Unless we see its faults, how can we renounce samsara? The gods have no chance to practice morality or generate the mind renouncing samsara, so no matter how long and pleasurable their lives are, their next rebirth is surely in the lower realms.

It seems that compared to human beings, the gods have unbelievable pleasure and freedom, but they lack the most important freedom, the freedom to practice Dharma. That is why not being born a god is considered one of the eight freedoms of this perfect human rebirth.

Contemplating the suffering of the gods, even with their unbelievable pleasures, helps us appreciate how precious this human life is. Only with this perfect human rebirth can we practice the Dharma—no god can, no animal can, no hungry ghost can and certainly no hell being can. Therefore we should think, “How fortunate I am not to be a god. I have found this perfect human body qualified with eight freedoms and ten richnesses and have the freedom to practice Dharma.” We should feel this deeply in our heart and determine never to waste even a second of this life.

26 Shariputra was one of the two principal disciples of the Buddha. In Liberation the doctor is referred to as the “king of doctors,” Kumarajivaka; see p. 272. [Return to text]

27The Thirty-three Realm is the second of the six realms of the gods of desire on Mt. Meru. [Return to text]