Sun of Devotion, Stream of Blessings

Sun of Devotion, Stream of Blessings is the record of a remarkable series of powerful and clear Dharma teachings given by Kyabje Lama Zopa Rinpoche to students in Leeds and London, United Kingdom, in 2014. This book is now available in print and digital formats. 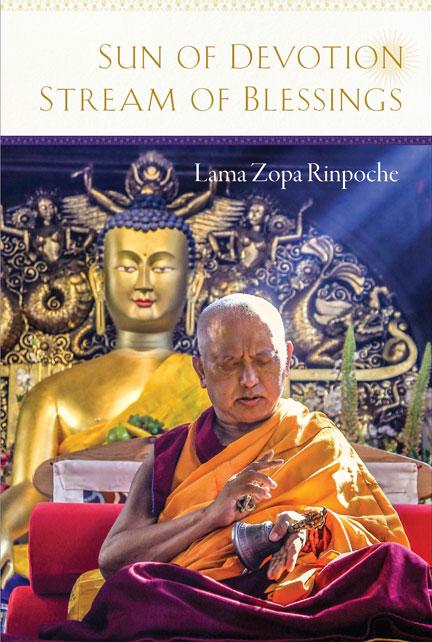 This book is the record of a remarkable series of events. In July 2014, Lama Zopa Rinpoche, the spiritual director of the Foundation for the Preservation of the Mahayana Tradition (FPMT), visited the United Kingdom for the first time in thirteen years, teaching in Leeds and London. That Rinpoche taught was not remarkable—Rinpoche teaches with every breath—but the timing of the event and the power and clarity of his teachings after so long an absence were something none of us there at the time will forget.

The first event took place at Trinity University in Leeds on exactly the same day and within a few kilometers of the start of the Tour de France, the 3,600-kilometer cycle race that is the greatest sporting event in France (and for some reason started in the UK in 2014). The million people who came to witness the start made the logistics of getting to Rinpoche interesting. I remember arriving at Leeds station and seeing a sea of humanity filling every platform, making Delhi railway station at rush hour look deserted by comparison. Miraculously, just outside, empty taxis were waiting and there was a clear run to the university. A local said to me, “This is the most amazing day Leeds has ever seen.” I had to agree with him, although which of the two events was the more amazing I will leave for you to decide.

I feel very fortunate to have been at those teachings (albeit flagging a bit by dawn of the second all-nighter in London) and so in editing them I wanted to retain the flavor of a great master giving precise instructions to the students in front of him.

Besides omitting the end-of-session dedications and event-specific aspects—the giving of an oral transmission and an initiation—I have tried to keep the subjects in the book as close to how Rinpoche taught them and in the order they were given. I have merged one or two sections, especially where in Leeds and London he said basically the same thing, and shifted the order of a few small sections to give the book greater overall cohesion, but this is still the record of an oral teaching. Therefore you will notice many interjections where, for example, Rinpoche explains a side issue (sometimes at length) within the context of the main subject. Bear with this. If you have ever had the good fortune of actually experiencing one of Rinpoche’s teachings you will know that this is his style.

Furthermore, the way he kept coming back to certain ideas, as if to reinforce and expand on what he had said previously, felt incredibly powerful to me as I sat there in front of him. As I edit the transcripts it still feels that way. I hope the way I have edited the book has not lost too much of the power of Rinpoche’s presentation. His profound explanation of sang-gyä is one instance of this, which he reiterates many times. Rather than use the stock English translation of “buddha,” Rinpoche dissects the Tibetan term and shows that sang, the complete elimination of all obscurations, and gyä, the complete attainment of all realizations, is what a buddha is, is what buddhahood—enlightenment—is. For most of us, the Buddha is a guy sitting under a tree glowing with light. Rinpoche explodes that very limited view. As he says, “Don’t get hung up on the words.”

The other two themes he kept returning to were the danger of following the worldly protector Shugden, or Dolgyal, as he has here more often referred to him, and the great qualities of Khadro- la, the incredible being who has become very important to Tibetan Buddhism, FPMT and the world. Having had the fortune of doing two retreats with her, I feel that what Rinpoche says of her importance is no exaggeration at all.

Usually with edits of Rinpoche’s teachings I am unable to thank people individually because it has been a team effort often spanning decades. Although there have been many people involved in the production of this book, I would like to thank two in particular, Ven. Thubten Munsel, who transcribed the audio files, and Diana van Die, who checked the transcripts. They both did their work with such speed, accuracy and devotion that my job was made very easy indeed. Whatever mistakes and confusions there might be in the book are entirely of my doing.

May this book of Rinpoche’s UK teachings inspire all who read it and bring them compassion, patience and wisdom. In particular, may it be the source of harmony and strength to the various UK centers and study groups, especially the brand new Land of Joy retreat community, which became physically manifest during Rinpoche’s visit.

May whatever small merit gained from the creation of this book be dedicated to the long and healthy lives of His Holiness the Dalai Lama, Lama Zopa Rinpoche, Khadro-la and the other great teachers of the FPMT, of Tibetan Buddhism and of all Buddhist traditions. Through the sun of our devotion, may the stream of their blessings always pour down upon us.

Chapter 1. Taking Care of the Mind »

Sun of Devotion, Stream of Blessings
Editor's Preface
Chapter 1. Taking Care of the Mind
Chapter 2. Our Happiness Is in Our Hands
Chapter 3. The Hallucination of the Real I
Chapter 4. The Need for Ethics and Refuge
Chapter 5. The Room Before It Is Named
Chapter 6. The Guru Is the Most Powerful Object
Chapter 7. A Talk about Dolgyal
Chapter 8. Khadro-la
Chapter 9. The Importance of Guru Devotion
Chapter 10. Seeing the Guru as a Buddha
Chapter 11. More Precious Than a Wish-granting Jewel
Chapter 12. Cutting the Root of Samsara
Chapter 13. Practicing Tantra
Translations (Sun of Devotion, Stream of Blessings)