Thanks to all of you for subscribing to our monthly eletter. Please share it far and wide.

We have just posted archival film shot in and around Lawudo, Solu Kumbu, Nepal in 1974 to our YouTube channel. Filmed by Bradley Dobos, you can see the monks of the Mt. Everest Center for Buddhist Studies debating to Lama Yeshe's delight, the enthronement at Lawudo Gompa of Charok Lama Tenzin Dorje and the Mani Rimdu festival at Thang-me Gompa.

We have also posted two short films: Walking with Lama Yeshe, which shows Lama Yeshe walking and talking with students in 1977 in Yucca Valley, California, and includes a special question-and-answer session with Lama that was recorded later and added to this footage; and Trekking in Disneyland with Lama Yeshe.

Lama Zopa Rinpoche was invited to join the visit to Disneyland but preferred to stay home, meditating. When Lama Yeshe returned, he said, “Kusho! You have to go to Disneyland!” So a couple of days later the students took Rinpoche and the visit included a ride on a very steep roller-coaster. At its conclusion Rinpoche exclaimed, “Now this is true suffering!" 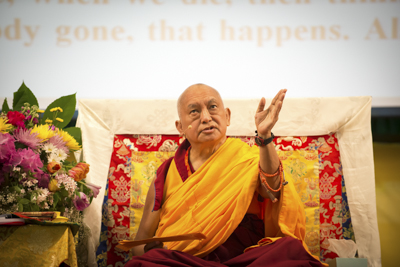 Work steadily progresses on a number of book projects. I'm doing a final round of edits to Rinpoche's 2014 teachings in the UK.You can read an excerpt of the these teachings -- Taking Care of the Mind -- on our website, and view a video of the teachings on FPMT's Livestream page. We've included another excerpt as this month's eletter teaching below.

Ven Sarah continues her work on the Heart Advice Series, while we are also preparing a multimedia version of Bodhisattva Attitude. Speaking of which, our intrepid volunteer Alan Wilson has just sent us the Braille version that he produced of Bodhisattva Attitude; the contracted Braille file is available for download on our For the Visually Impaired page. This brings the total number of LYWA titles available in Braille to eleven!

Alison Murdoch is working on a wonderful project that we’re calling (at this stage) Lam-rim Year. The Lam-rim Year will be an easy-to-use resource for Dharma students who wish to deepen their understanding and practice of the lam-rim. Following the outlines created by Pabongka Rinpoche and other lamas and drawing on the extensive material in the Archive, it will provide 365 days of inspiring quotes and thought-provoking commentary from Lama Yeshe and Kyabje Lama Zopa Rinpoche. This resource will also be made available as an ebook, a smartphone/tablet app and on line.

We are also continuing to work on the FPMT Lineage Series books, with Rinpoche’s Good Life, Better Death: Teachings on Impermanence next in the pipeline. Unfortunately, our forthcoming book on Rinpoche's emptiness teachings, Moon in Rippling Water, has been canceled.

And we can't forget Lama Yeshe's biography Big Love, which is currently being copyedited, with final image selection scheduled to begin soon. 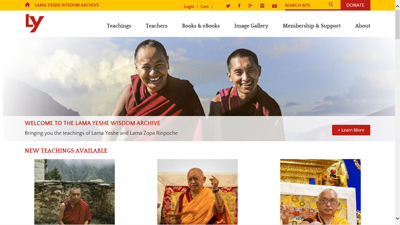 As we mentioned in last month's eletter, we are nearing the launch of our new website. It is scheduled for mid-August. In light of this, we have not posted any new content to the present site, while we focus our energies on putting the finishing touches on the new site.

If you are interested in taking a "test drive" of the new site, please send an email to Jen Barlow. We welcome volunteers of all IT skills levels. We want our new site to be easy to use for everyone! Thanks in advance for your help.

NEWS FROM THE HOME FRONT

Last week  Ani Desal, Jen and Wendy -- with help from Jen's son John -- worked for a few hours on beautifying the grounds around the LYWA home. We created and expanded gardens, added fresh soil, and replanted a number of trees and bushes. One of the plantings that we moved was this tender little Japanese Maple, which spontaneously appeared on the property along the road. It is now settled in to a place of honor right outside the front window. 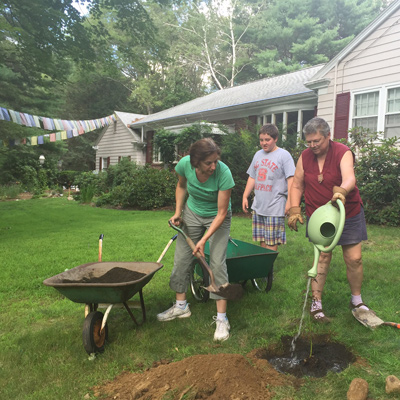 Thank you so much to all of you who offer your support to LYWA's mission. We rejoice in our work together to make these precious teachings available to everyone everywhere.

THIS MONTH'S TEACHING: What We Do to Protect this Nonexistent Real I 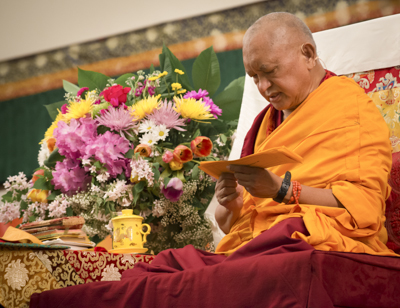 Otherwise, without checking, because of our belief in its reality there are all the worries, all the fears. Because of this this wrong projection, when somebody passes us with her nose in the air, looking down at as disdainfully, it hurts so much! Or when we do a good deed for somebody, such as giving a thirsty person a glass of water, and we don’t even get a simple thank you, that really hurts. Being shouted at, being complained about, hearing disrespectful words—all these things hurt us.

Especially nowadays, with the world economy in recession, people are trying to find ways to make money, so they complain about any small thing somebody else does. I don’t know about England, but I’ve heard that in America you are supposed keep the front of your house clear of snow and if you don’t clear it away well enough and somebody falls over you will be sued, which in America means huge expenses.

There is a good example from the FPMT center in Sicily, Centro Muni Gyana. Once, while I was giving a talk there a student explained how she had been sued. Her job was assisting in the births of babies, taking them from their mothers’ wombs, and one day one had died. I’m not sure whether the baby was dead in the womb or it died during delivery, but the mother blamed this girl, telling her she had killed the baby, that the baby died because she had made a mistake. The girl talked with all her friends and they confirmed what she did was right, that it wasn’t her fault, but the mother blamed her and wanted money from her. She was trying to make money out of the situation. This is just one example.

Nowadays, with the downturn in the world economy, so many people are trying to make money in this way, trying to prove that somebody else has made a mistake, whether they have or not. The girl asked me what to do and I did my own Mickey Mouse divination and told her to recite the Vajra Cutter Sutra eight times. She did this immediately and later she told me that she won the court case.

Our whole life is spent afraid of something happening to this I, to this real I that appears from there. We totally, a hundred percent believe it is real and we do everything we possibly can to protect this real I, which is not there. We see all the possibilities of being hurt. “This will make me sick. This will kill me. This will hurt me.” We take every possible precaution to prevent this real I that doesn’t exist from being hurt.

Determined to keep fit, we do hours of exercise every day, by jogging or working out on machines. There is a big industry making new types of machines for our real I to keep fit on. As soon as a new machine has been on the market a few months a new one comes out and our real I has to have it. Each machine makes us do it differently—from lying upside down to putting our head between our legs—and we are forced to buy new ones because the experts in advertisements convince us this new one is better.

All this is done for our real I, for the I that appears real and we believe a hundred percent is truly there. Even exercising the body, doing many hundreds of pushups, is for this real I. Everybody jogging, running and doing exercises is doing it so that this I does not get sick. They are protecting this I. They have injections to prevent diseases before they happen. They take every single precaution they can to protect this real I.

If we were to meditate for just one day, analyzing, checking, going to a subtler level, we would see that this real I is not there! What appears as the real I, what we believe a hundred percent to be real, is not there. However, we don’t check and this labeling process goes on continuously. It has been going on since we were born and will continue up to death.

The labeling thought merely labels I on the subject and the merely labeled action on whatever the aggregates do. It has been and will be like that, from the time our consciousness entered the fertilized egg in the mother’s womb until our death, when the extremely subtle mind, what we call the subtle mind of death, leaves from the heart, the place where it entered into the fertilized egg at the very beginning. This happens after the person is clinically dead: after the breathing has stopped, the heart has stopped beating and when there is no more brain function.

When we analyze, we can understand very clearly the great difference between the reality of the I and actions and how we believe they exist when we don’t think about it. The way we normally think is a total hallucination, a total illusion; it is like a dream.

Excerpted from Lama Zopa Rinpoche’s teachings in England 2014, forthcoming as a book this year. Edited by Gordon McDougall.