Order a print copy by clicking the Add to Cart button on this page. You can find ebook vendor links here, sign up for the Lamrim Year Companion or download a free PDF file. 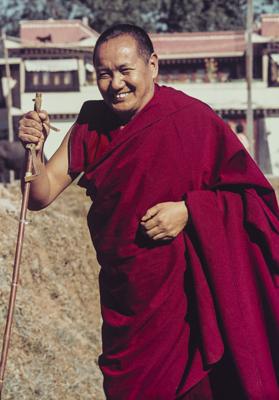 It’s important for Dharma students to understand Lord Buddha’s scientific teachings on impermanence and death and not try to hide from or escape the reality of death. We need to face it.

Of course, for people brought up the way they are these days, this topic might be a little bit too much, because in general nobody teaches us about this aspect of reality. When I talk about death we might think, “Oh, that’s Lama’s thing, not mine,” even though it’s an undeniable fact that illness and death are within us right now. How can we reject our own nature? How can we escape from death when we are living immersed in the conditions for it to arise right now?

That’s why I always say that Buddhism is not diplomatic in character. It shows us straight up our own nature. But that doesn’t mean we should cry emotionally, “No! That’s too bad. I’m going to get sick and die. Dying is terrible!” We mustn’t think in an ordinary way. Do we think that’s wisdom? “Don’t tell me that! I don’t like it!” That’s not wisdom. Check up carefully. Old people don’t like that they’re old so they just push back and deny it. Is that wisdom or not? From my point of view, from Buddhism’s point of view, that’s stupidity and ignorance. Rejecting how old we are; hiding from information about death. And we can’t say that teachings on death are simply an Eastern custom. Is our death an Eastern custom? Has our death been created by Lord Buddha? No. Our death has not been created by Eastern custom, by Lord Buddha or by Buddhism. It’s in our very nature, so how can we reject it?