Visit the free Lamrim Year Companion website and sign up to access the daily meditations wherever you are, from your computer or mobile device. A Lamrim Year Crosswalk PDF is now available. This new PDF is a navigational guide created to support students who wish to extend their understanding of the teachings found in Lamrim Year by reading the corresponding section of the renowned book Liberation in the Palm of Your Hand, by Pabongka Rinpoche. 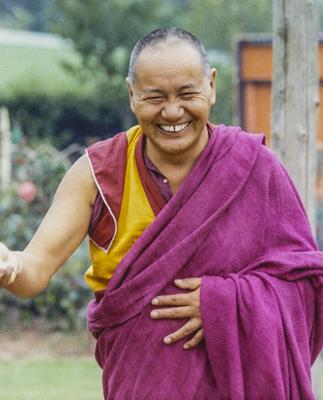 Day 7: The Qualities of the Guru (Lama Yeshe)

There is the need for an organic, living kind of force to come in touch with our heart
—Lama Yeshe

The main reason that religion in both the East and the West has degenerated so much nowadays is the rarity of meeting good spiritual examples. If people never meet highly realized beings they have no way of knowing the limitless possibilities of their own human consciousness. It is not enough that there are texts recording the deeds and accomplishments of past masters. By themselves, such stories cannot inspire us very much. In fact, they may only increase our feeling of remoteness: “Buddha and Jesus lived such a long time ago,” we may think, “and their purity belongs to another age. It is impossible for someone like myself living in this degenerate twenty-first century to attain anything resembling their level of purity.”

The only way we can lay to rest these feelings of doubt, incapability and cynicism is by coming face to face with someone who has activated their highest potential. Only then do we have an example of purity and spiritual evolution we can actually see and relate to ourselves. Thus the outer guru is of utmost importance. We need the example of someone who, while human like ourselves, has developed beyond the bounds of what we presently think possible.

When we see someone who has reached beyond selfishness, who has transcended the petty concerns of this world while still living in the world, who speaks and acts from intuitive wisdom and who is truly dedicated to the welfare of others, then we can have faith and conviction that these attainments are possible for ourselves as well.

Guru devotion
1 Devoting to the guru
1.2 The qualities of the guru