Teachings at the Kadampa Deities Retreat

These teachings were given by Lama Zopa Rinpoche at a retreat held at Institut Vajra Yogini, France, from 18 April to 11 May 2003. The retreat was on the four Kadampa deities, however, Rinpoche teaches on a broad range of lamrim topics and gives a thorough explanation of meditation on emptiness. Read the first eight discourses, lightly edited by Sandra Smith.

We have now posted Lecture Eight of this series. In this lecture, Rinpoche teaches on the purpose of our life, the twelve links of dependent origination and other topics, and shares stories from his childhood. 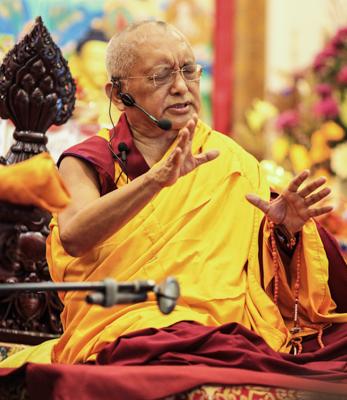 7. Everything Comes from the Mind

We’ll start with a little bit of walking meditation, having the awareness that everything comes from the mind. However, each time you are walking you can do a different meditation.

There is one example that I often mention to introduce how things came from the mind.

In reality, going back to our childhood when we didn’t know the alphabet; going back to that age before we were taught by our school teacher or parents or somebody that “This is Z,” it didn’t appear as Z to us. We didn’t see that this is Z—we just saw the line; we just saw a design like this. Maybe from your side it’s like that and from my side like this. [Rinpoche draws Z in the air] From my side it should be like this, but from your side it doesn’t become Z, right? From my side this is Z but from your side it’s not Z. Depending on how these pieces are put together, in your view it’s not Z but for me it’s Z.

First our mind sees the base, the design which can receive the label Z. That has to be the preliminary. Seeing a particular phenomenon which carries that label then causes our mind to decide on the particular label Z;  to choose this particular label. We see that figure or that design, and that is the reason or the cause for making up the label Z. Why not A? Why not B? Why not I? Why not label I?

We have the appearance of Z only after the mere imputation of the label. Only then we see Z; only then. The very last thing is that we see Z and we think, “This is Z.” There are these gradual stages which are the evolution of how the Z comes in existence. Here we can see Z comes from the mind by imputation. If it’s not imputed by the mind, then we don’t see it.

Going back, when we see Z—that which appears as Z—and we think, “This is Z,” it came from our mind merely imputing and believing in that, because we were introduced to it by somebody and we believe in that person’s label. So there’s a whole thing there. It didn’t just come like that, [Rinpoche snaps fingers] existing from its own side. It’s not like that. There’s a whole gradual evolution.

Differentiating the Base and the Label

This is according to His Holiness Ling Rinpoche, when Rinpoche explained the seven-point thought transformation commentary at Drepung Monastery many, many years ago. His Holiness Ling Rinpoche used to say that we see the base of the table mixed with the label “table.” We can’t differentiate—the label is kind of mixed with the base of the table. These are wrong views. Now we can get some idea by going through the evolution that these are the wrong views; they are hallucinations of the table which are not true.

When that design is drawn on the wall or on paper, by seeing that particular base we merely label Z and we are satisfied with that. By seeing that base then we label Z. If that design is not there, we don’t see Z. We label like that. Depending on whether the base exists we label that and we believe that label exists. If the base is not there, then also the label is not there. Depending on what’s happening with the base, we put the label on that.

The base and the label don’t exist separately, but they exist differently. Same thing, by having the base, the table—whether it’s a round table or whether it’s square or another shape, that has the function of putting things on the top—by somebody bringing that base, then our mind labels it because we were introduced to the name, the label “table” before, in our childhood. It’s exactly the same for everything that we label now in our daily life, twenty-four hours a day. If we’re introduced by somebody, just like the Z, we believe that and then our mind labels this and that.

Here we can see the Z came from the mind. Like this, all the phenomena, I, action, object—the sky, trees, roads, cars or any other phenomena that we see—in the same way, exactly like this, they came from our own mind. They came from our own mind, by believing in somebody’s introduction. Somebody introduced us to the label and we believe in that. Our own mind merely imputes and believes in that, then the object appears and we label it.

It’s like that for everything—whatever we see around here, every object, all these different foods and different fruits, for example bananas. We can meditate on how the banana or another piece of fruit came from the mind or how all these different colors—white, blue, green and red—came from the mind. If there were no mind, there would be no label, no red, white or blue color, all this. There wouldn’t be all these labels if there were no mind labeling. And without the label we wouldn’t see that this is red, this is blue, this is yellow, this is black. We wouldn’t have this appearance of blue and black and white and red, all these things. We wouldn’t have this appearance without the label coming from the mind. Everything comes from mind.

The Object to Be Refuted

Buddhas don’t see this; buddhas see our hallucination but they don’t have this hallucination. A buddha sees that this object is totally empty, totally nonexistent. This yellow existing from its own side is not there and this is what a buddha’s omniscient mind sees. So that means how we are thinking and what we believe, the way it’s appearing and what we believe now is totally wrong. If it truly exists, then the omniscient mind should see that, but the omniscient mind doesn’t see that.

A buddha sees our hallucination, our vision—the inherently existent yellow, blue or any color. Even though it came from our mind and is merely labeled, when we look at it, all this is appearing from there. All this is a hallucination, the object to be refuted. In reality all these phenomena are empty right there. This is a little bit about another extra subject, that these things came from the mind. This extra subject needs more analysis.

The main thing is you don’t need to close your eyes. Just keep them open and look around. Look around and meditate on whatever object you see, thinking how it came from the mind, whether it’s another person or the sky or an insect or the trees, anything that you see. Also, as I mentioned, the first thing is that it came from the mind; it’s merely imputed by the mind. Think about the whole thing, the process.

Next, as I also mentioned, things are appearing from there. You can use the example of the colors. Even though they are merely imputed by the mind, they appear strongly as real yellow or real blue. All these things are appearing from there as real, which is totally opposite to the evolution, how they came in existence. Totally opposite. That means all these things are hallucinations. So many things are strongly appearing as real but all these are hallucinations. That means they are totally nonexistent. This is what the Buddha sees, this is what the Buddha discovered. This is how the Buddha sees phenomena, as not existing from their own side. Thinking about how the Buddha sees things is also helpful, because it gives us some idea that phenomena don’t truly exist. For us, appearing from there is so strong, so habituated in our mind from beginningless rebirths, that we think it’s true.

First think, as I used the example Z, how it came from mind.

Then think that things appearing from their own side—never coming from mind, never labeled by the mind—are empty. Think that in reality they are empty there, nonexistent there. Think that they came from the mind, from negative imprints, however, they are empty there, nonexistent there. You can think like that. All phenomena—hell, enlightenment, samsara, liberation, everything—came from the mind and how they appear to us is totally contradictory to the reality of what they are.

The secrecy of the mind or the point is that if we let our mind believe all these are true, then that becomes the basis for the delusions and gives rise to all the other negative emotional thoughts. All those superstitions, all those hallucinated minds for example attachment and anger, arise. Then according to our motivation we create karma and that’s how we create samsara and the cause of samsara.

But we can practice mindfulness that all this came from the mind and especially that this appearance is a hallucination and is the object to be refuted. It is nonexistent; it is empty. By thinking that, we don’t allow our mind to believe in or hold on to these phenomena which appear as truly existent from their own side. We can meditate and practice mindfulness that they are a hallucination, that they are empty. Then, we are not allowing the mind to create samsara, by creating the cause of samsara.

This is the wisdom that destroys samsara and the cause of samsara and is the cause of achieving liberation, everlasting happiness, liberation from samsara. With this experience we are able to guide and liberate other sentient beings from the oceans of samsaric suffering. We can do this when we have realized emptiness, especially when we have directly perceived emptiness.

How a Positive Label Creates the Cause for Happiness

[Inaudible question from a student]

Student: When you analyze, you find that the base has been labeled by the mind, but when your neighbor labels the same thing in the same way, it strengthens the perception of true existence.…[Inaudible]

Whether we made a mistake that the person criticizes or even if we didn’t make a mistake, we are still purifying the negative karma which we created in the past. So like that, look at the situation as positive.

You can think of [patience] as a weapon. Think that the person is helping you destroy your ego and practice patience so that you can overcome anger and be free from anger forever. Think, “This anger is the greatest obstacle to my happiness and merit.” So think that you are destroying the ego, just as a bullet or missile is dropped from a United States airplane. The airplane drops this long missile or bomb—it goes this way and then hits [the target.] Whether it’s called a bomb or missile, whatever it is, think your patience is a missile or bomb to destroy your ego.

I think that’s it. Maybe you can do some circumambulation and then do some walking with mindfulness.

8. The Purpose of Our Life »
+ View All Teachings

1. How to Achieve Real Happiness
2. Motivation for the Retreat
3. The Emptiness of Sound
4. The Compassion Buddha
5. The Good Heart
6. Meditation on Emptiness
7. Everything Comes from the Mind
8. The Purpose of Our Life

Teachings at the Kadampa Deities Retreat
E-letter No. 174: December 2017