Teachings at the Kadampa Deities Retreat

These teachings were given by Lama Zopa Rinpoche at a retreat held at Institut Vajra Yogini, France, from 18 April to 11 May 2003. The retreat was on the four Kadampa deities, however, Rinpoche teaches on a broad range of lamrim topics. Read the first fifteen discourses, lightly edited by Sandra Smith.

We have now posted three more lectures from this series. In Lectures 13 and 14, Rinpoche explains that Guru Puja (Lama Chöpa) is the heart practice highly recommended by Pabongka Dechen Nyingpo and other great lamas. In Lecture 15, Rinpoche advises us to learn and practice lamrim while we have this precious opportunity. Rinpoche continues with commentary on Calling the Guru from Afar and concludes with extensive dedications. 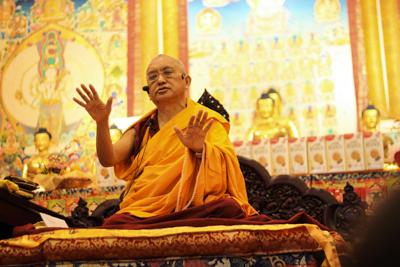 3. The Emptiness of Sound

[Sound of rain pouring down]

The first question is, how does the sound appear to your mind? So analyze that.

So, what is sound? Sound is merely imputed because of the object of the ear sense, because of that. Because that is happening. Therefore, what is sound? Therefore, sound is nothing except what is merely imputed by the thought, by our own thought. Now here, there’s differentiation between the label, sound, and the base, the object of the senses. There are two different phenomena, the label, sound, and the base to be labeled. Oh, it’s getting stronger. [Rinpoche laughs] What the ear sense hears, the object, in Tibetan it is called …, the object to be heard by the sense of the ear. That is the definition of the sound. Actually, the definition is the basis to be labeled sound. You’ve got the idea, how to do analysis.

That’s how we meditate when we recite the Heart Sutra, “no sound,” that’s the way to analyze in a little more detail. That’s the process of analysis, that recognizes the hallucination that we have on the merely labeled sound, that hallucination, and the ultimate nature of the sound, which is emptiness.

So, meditate, trying to discover the differences between the sound, the label and the base, to be imputed the label “sound.” So that’s the key point, that one, to meditate on that.

Now, the sound, for your view, for your mind, the label “sound” on that base, which I mentioned before, that is a hallucination, that is the object to be refuted. According to the Svatantrika, the Madhyamaka Svatantrika school, rang gyu pa, that is the correct view. There is the label sound on the base, which is heard by the ear sense. That is correct according to that philosophy, because if anything exists, there should be something from its own side.

The Object to be Refuted

Not being satisfied that it’s being merely imputed by mind and that it should be something extra than that, additional, beyond from that. The Svatantrika school philosophers, rang gyu pa, their point, their definition of truly existent is, for example, that the sound or any phenomena that exists totally from its own side without appearing to the valid mind, the undefective valid mind and the undefective valid mind labeling. They don’t use the word “merely labeling” even though, but even though I did hear, one geshe told me that, do use merely labeled. But anyway, however, that’s normally what we hear. They don’t use merely labeled; they accept that it’s labeled but there should be something existing from its own side, so therefore they don’t use the words “merely labeled.”

Now we will continue to meditate on the sound of the rain falling, so now we are meditating on the object to be refuted, the hallucination. The object to be refuted, there’s sound on the base; there is sound but how it appears to you is not merely labeled by mind. So, one-pointedly concentrate on that and while you’re concentrating, while your attention, awareness, is on that, at the same time, there should be mindfulness, accompanying that, that this is hallucination. There is this recognition, this understanding, at the same time.

So we’ll do this.

The Emptiness of Sound

So just meditate on this intensively, one-pointedly, on this emptiness, which is the emptiness, the ultimate nature, of this sound, the sound of the rain falling.

That is the best example, that becomes the best example to recognize the false sound, the object to be refuted. The sound is what is merely imputed by the mind, and there’s this extra projection that we put on it. First our mind merely imputed sound, as I explained at the beginning, then right after that we project from the negative imprint left on our mental continuum by the past ignorance apprehending sound as inherently existent, so we project or decorate the truly existent appearance.

So now here, exactly just like that, exactly the same, the sound that we hear here right now. It appears not merely labeled by mind and we believe it’s true one hundred percent, but it’s totally, totally, completely non-existent, empty.

You hear only the base? You can hear the sound? [Student’s answer is inaudible] That is still good what you said. It has some taste. You said that you hear the base. There is some mistake, there is a mistake, but it’s good. [Laughter] You are using the reason, the base, so that is good. That helps gradually, that helps to understand. Once you are aware of that, then you come to know the label. The sound which is imputed on that, because you hear the base there is no other reason why you believe, hear sound, “I’m hearing sound.” There’s no other reason except because we hear the base, so that’s why it is believed, that’s why our mind labels hearing sound and believes in that.

Your bringing up the base, so that has some taste. Huh? Mistake that I already mentioned just now.

Oh, just the thought? Thought of sound is there? [Student’s answer inaudible]

So, is there war or is war not happening? Huh? [Student’s answer inaudible]

Huh? Yeah. Oh, I see. The base is outside, and the label is in the mind? Right? The people who are with the tanks shooting and killing, bombing, all those things, so all those exist outside? [Student’s answer inaudible]

That’s it, I think. Analyze, okay.

But here, we use lamrim as an antidote for the delusions, because what causes us to suffer in samsara is delusion, therefore, we need mindfulness of the lamrim, along with the action. So, it’s not just only for walking. The idea is in the daily life, twenty-four hours, even at the times when we don’t do sitting meditation on lamrim, we need to practice awareness of the different parts of lamrim. That’s an idea.

But because the rain came, then I thought maybe good to use the sound of the rain, since we hear so strongly the sound of the rain falling. Since we hear it so strongly, we can use that to meditate on the Heart Sutra, the Heart of the Wisdom, that wisdom which directly ceases the defilements and causes us to achieve liberation, and combined with bodhicitta, accompanied by bodhicitta, it causes us to achieve enlightenment for sentient beings.

I think I have to run away, so anyway, thank you so much.

4. The Compassion Buddha »
+ View All Teachings

1. How to Achieve Real Happiness
2. Motivation for the Retreat
3. The Emptiness of Sound
4. The Compassion Buddha
5. The Good Heart
6. Meditation on Emptiness
7. Everything Comes from the Mind
8. The Purpose of Our Life
9. The Eight Mahayana Precepts
10. Refuge and Bodhicitta
11. Shakyamuni Buddha Name and Mantra
12. The Power of Mantras and Holy Objects
13–14. Guru Puja: The Heart Practice
15. Calling the Guru from Afar