This advice was given to a student who asked whether it was beneficial to travel as there were some obstacles.

The student should pray to His Holiness the Dalai Lama. That is the main puja, the main practice that she should do. No matter how many heavy obstacles there are, this is the best puja, the most important puja.

There are various other things that can be done when there are travel obstacles, so she can do these as well.

The other pujas she needs to do are:

There were concerns about obstacles for flights. Rinpoche checked and advised the importance of doing the following practices.

A geshe at a Dharma center was having great difficulty in getting a visa for his return to teach at the center. Rinpoche checked and gave this advice.

It’s good to have the following practices done by the center and members.

Rinpoche gave this advice to a student who asked if there was any risk if they traveled around a third world country for a TV show.

Rinpoche checked and said there are some obstacles, but if you do these practices every day while you are there, then it will be fine.

On a recent journey, a flight attendant had asked Rinpoche for a prayer. Rinpoche recommended Tara practice and explained a visualization and prayers for the safety and happiness of others. 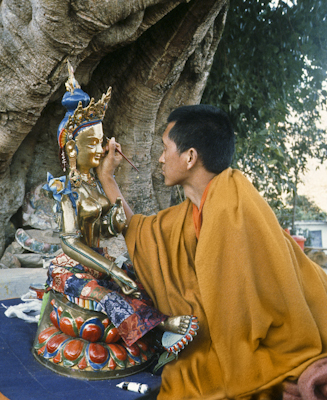 My most dear, most kind, most precious, wish-fulfilling jewel,
It made me so happy that you asked for some practice or some prayer. I just wanted to mention about this practice of Tara.

Tara is the holy name of this Buddha, the Omniscient One, who has great compassion for you and for every sentient being, and perfect power to reveal and to guide the numberless sentient beings, including you, with all the different methods, whatever fits each sentient being. Tara is the Buddha in a female enlightened aspect. Her name is Tara the Liberator, or Mother Liberator. She is the manifestation of all the numberless buddhas’ holy actions in this female enlightened aspect. She is called mother because all the buddhas are born from her.

It would be very good if you could do this meditation on Tara. If you can, do the Tara Guru Yoga and when you have time or if you like, you can recite the Praises to the Twenty-one Taras.

When the airplane has turbulence, I do tonglen, taking all the sentient beings’ sufferings and the causes, and then giving all the happiness and merit to all other sentient beings. That is the best thing, the ultimate good heart, bodhicitta.

Then I visualize the twenty-one Taras around the airplane, outside the plane. There are twenty-one different aspects of Tara, and the simple aspect has one face and two arms, according to Lama Atisha.

Lama Atisha was invited to Tibet to make Buddhism pure and he did great works to benefit sentient beings by writing the teaching Lamp for the Path to Enlightenment. The Buddha has 84,000 teachings, and these are condensed into the Lesser Vehicle teachings and the Great Vehicle teachings. Then that is further divided into the Mahayana sutra and the Great Vehicle teachings, the Mahayana tantra. All these teachings are condensed into a few pages in the teaching of the Lamp for the Path to Enlightenment. This teaching simplified and clarified all wrong conceptions and misconceptions that had happened in Tibet during that time, such as if you practice sutra then you can’t practice tantra, and if you practice tantra then you can’t practice sutra, and so forth. So, this teaching eliminated all the confusion and illuminated again the pure Buddhism that spread in Tibet.

I visualize the twenty-one Taras around the airplane guarding the people in the airplane.

Then I pray not only that the plane is safe and when it lands all the people arrive safely, not only that, but I also make the prayer that for as long as the plane exists and carries people anywhere, for all the people that get on the plane to be safe and to never be harmed, for there never to be danger to the people. I used to pray like that as much as possible, but now I have added more prayers, such as:

May all the people who come on the plane, now and for as long as the plane exists, never be reborn in the lower realms.

This means to never be reborn in the hell realms, hungry ghost and animal realms. The animal realm includes all the different kinds of fish—the largest, like the whales in the oceans and the small animals, like snails, worms, those living in the ground, the tiny flies in the grass and in the trees and bushes, also the birds, so like that. I pray that when the people die they will never be reborn in the lower realms, because that means they will experience unbelievable suffering.

Regarding happiness, this means the happiness of this life and the happiness of future lives and it also means until sentient beings actualize the four noble truths, which is the basic teaching of Buddhism. Then especially ultimate happiness, the wisdom directly perceiving emptiness that ceases the seed of delusion and karma, which is the cause of suffering. In this way they are free from the oceans of samsaric suffering and the result. This means they have total freedom from the whole entire suffering of samsara forever.

I’m not sure how long this will take or when this will happen. It could take a billion eons or even a zillion, trillion eons, so many eons; it could be any time, numberless eons.

The word “enlightenment” has been used for so long, but people don’t really understand the meaning of enlightenment. Probably it is used in a common way. But when it’s used for buddhahood, then it means the total cessation of obscurations and the completion of realizations. That becomes the cause of happiness for other sentient beings; this means all the happiness up to peerless happiness. Therefore, it’s urgent to pray to generate bodhicitta.

This is how I try to pray on the airplane. I also add more and more prayers for other people.

It would be very good for you to pray like this also, since in your job you are always traveling on an airplane.

If you totally rely on Tara, that would be very good; that’s what you need. When there are problems, recite the Praises to the Twenty-one Taras if you can, then it is very powerful, very good. Or you can do the abbreviated short praise to Tara.

Start the practice with taking refuge and generating bodhicitta.

Next, generate a bodhicitta motivation. Think:

May I achieve buddhahood—the total cessation of obscurations and completion of realizations—in order to free the numberless sentient beings from the oceans of samsaric suffering, and not only that, to bring them to ultimate happiness, buddhahood.

This abbreviation in a single verse of the praises to the twenty-one Taras was received directly from Arya Tara by the great teacher, Jowo Atisha, for the swift collection of merit.

You can recite the mantra twenty-one times, or half a mala or one mala or more. That would be very good. When you recite the Tara mantra or praises, you can look at a picture of Tara.

Think that Tara sends loving kindness and compassion to you, like sunbeams, totally purifying you. Think that any sickness, spirit harm, negative karma and defilements collected from beginningless rebirths are totally purified, gone. First mainly think of purifying yourself, and then halfway through the mantra recitation mainly think of purifying the sentient beings. That is very good, also for your family members.

At the end, dedicate:

Due to all the past, present and future merits collected by me and the three times’ merits collected by numberless sentient beings and numberless buddhas, may the ultimate good heart, bodhicitta, be generated within me and within the hearts of all sentient beings. That means the numberless hell beings, hungry ghosts, animals, human beings, suras and asuras. In those whose mind bodhicitta has been generated, may it be increase more and more.

If you wish, you can do the following prayer for the world:

Due to all the past, present and future merits collected by me and the three times’ merits collected by numberless sentient beings and numberless buddhas, may all the wars happening now and in the future, all the sicknesses, cancers, spirit harms, famines, all the dangers caused by attachment, anger and ignorance, that which comes from sentient beings’ mind, may all this be stopped immediately.

May all the dangers of fire, water, earthquakes, hurricanes, tornados, tsunamis, also be pacified immediately and all the global problems, like the ice melting down and the oceans increasing and washing away the cities, may this be stopped and may perfect peace and happiness spread in the hearts of all the sentient beings.

Pray for the world by generating loving kindness and compassion.

If there is anything that you really wish to ask, you can send me an email with the question.

Please have a meaningful life with these prayers, so that your life may be most beneficial for every sentient being, every day. That’s the happiest life.

Thank you very much. I was very happy to see you on this journey. If you want to recite the mantra more, you will need a mala or rosary. I can send you a mala, so if you want one, let me know your postal address.

A student asked if it was beneficial to go to Tibet. The student also asked whether to explain sur practice to other people.

My very dear one,
Thank you for your kind email, I am sorry for the long delay.

I checked about you going to Tibet. You must do the protector pujas Mahakala, Kalarupa, Namtose, Hayagriva—the full protector pujas called Khangso. Then going to Tibet is good, otherwise it’s not good. Maybe, not sure, a heart attack might happen. Request the Kopan nuns to do the pujas for you.

Regarding your question about sur, the initiation is a big spank on the backside, like parents beating their children—in the East we do that but not in the West—just joking. Yes, please explain, I am sure it’s very good as many people want to do sur. It’s very good to do, because it helps the pretas and smell eaters. It’s their food, so it’s good to do, as there are numberless smell eaters.

Please continue to make your life most meaningful with the thought of bodhicitta day and night and in every action you do.