In 2010, Rinpoche wrote the following letter and sent it to all the Sangha of Sera Je Monastery. Rinpoche asked for this letter to be read out to the Sangha as dedication after they did pujas and prayers. The prayer is for all the turkeys that have been killed for Thanksgiving, as well as for all animals killed and all sentient beings, especially the ones doing the killing. Translated by Ven. Pemba Sherpa (FPMT Board member, co-director and resident teacher, Cham Tse Ling, Hong Kong). Lightly edited by Ven. Holly Ansett. 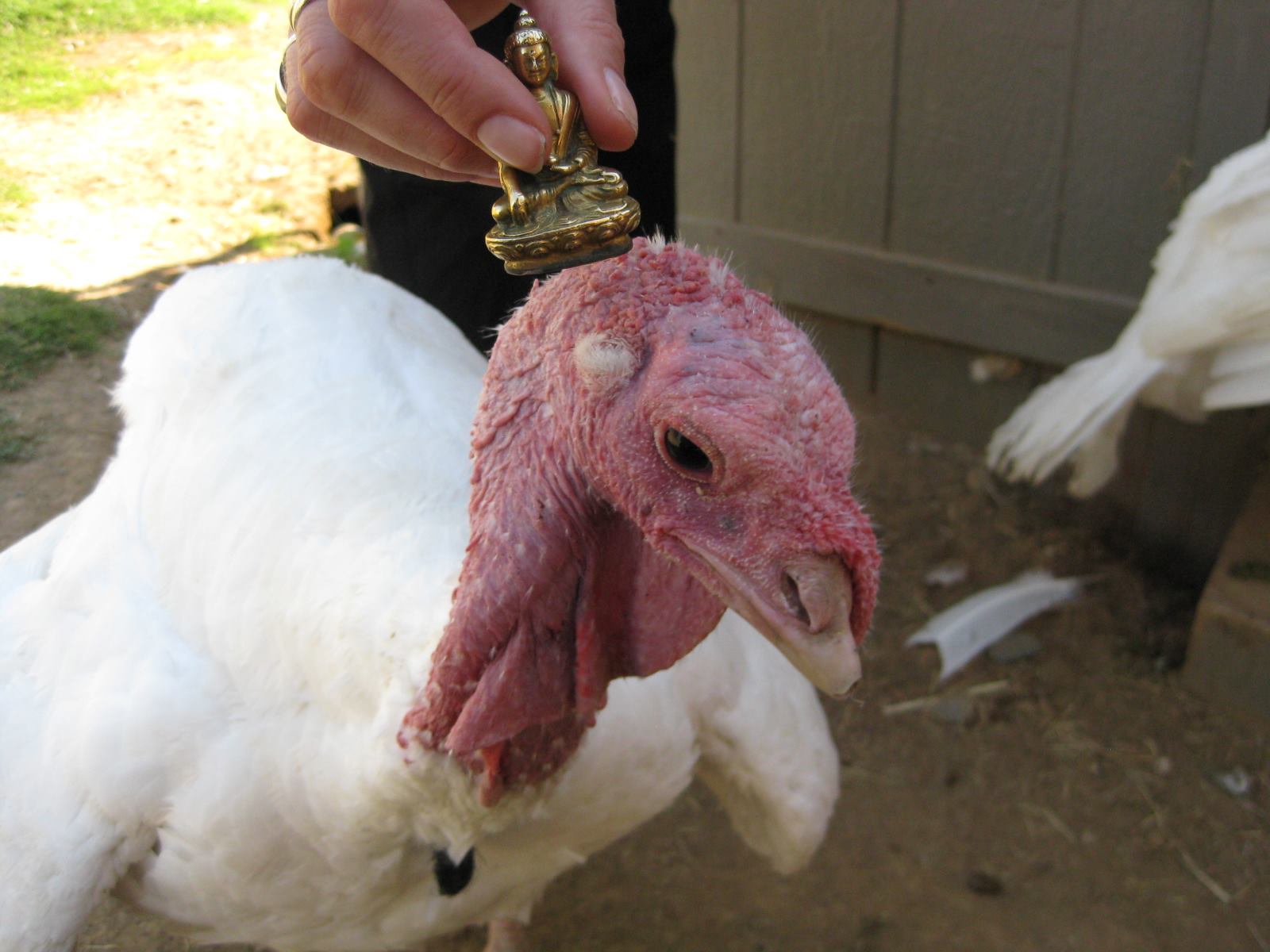 Although the letter writing may not be clear, please read it slowly.

In the Southern Continent in particular, the great Dharma king of three realms Lama Tsongkhapa’s unified pure refined gold-like teachings of sutra and tantra, not letting them degenerate through extensive hearing and contemplation the perseverance, the extremely precious greatly kind objects of refuge—the assembly of ocean of learned Sangha community—I offer this letter of request.

I, by the name of Thubten Zopa, am making a humble request to all of you, gathered here.

Today is Thanksgiving Day in the United States of America. At the beginning there were only the native Indians living here and no white people. Then white people from Spain and later England came and settled here. And that’s how the white community came into being in the USA. Those early white settlers they farmed and enjoyed the crops and they felt that all this was due to the kindness of the God. Therefore to say thank you to God, Thanksgiving was celebrated. So this is the history behind Thanksgiving Day.

Thanksgiving was started over 500 human years ago. It is celebrated by killing the bird that is known as a turkey, by so many people. This killing on this day is a bad tradition that is harmful for oneself and others.

On Thanksgiving Day over 65 to 66 million birds (turkeys) are killed for the American people to eat. If one human being got killed then it is shown on television and newspapers, broadcast as widely as possible, and they spend so long to analyze the reason to kill. But when an animal dies or gets killed, it seems the recognition is that it is just food to be killed and eaten. There is no thought and recognition that the animal is a sentient being—like us human beings, who also wants happiness and does not wish for suffering. It is very sad. Over 65 to 66 million turkeys are killed.

I, on behalf of all the turkeys, request your prayers and protection.

Please pray for them. Please guide them from the lower realms.

I, representing all of them, make requests to you, all Sangha community upholding the teaching of Buddha, compassionately, please help us the pitiful turkeys, who are now going through extremely terrifying fear and suffering in the lower realms. Please guide us to Buddha field or lead us to attain birth with the eight freedom and ten richness, so that from very young age we are able to enter into the precious teachings of Buddha, get ordained and meet a fully qualified Mahayana guru, thereby our body, speech and mind never to face any unpleasantness and negativities, but always find places of pleasantness and positivity, whereby we are able to enter Sera Je Monastery and train thoroughly in the principles of the common path—the three principal paths, and train in the uncommon path—by receiving the four initiations, that sows the seed of the four Kayas thoroughly in the mental continuum and through the practice of generation stage—ripening the mind, and through the practice of completion stage—liberating the mind and thereby attaining the resultant state of the union of holy body and mind, with the precious union of seven-limb embracing very quickly.

I, from the core of my heart make this request with vast, profound and swift prayers and dedication to actualize this.

I request the following prayers to be recited:

For all these, please offer many lights in the altar and offer Rs 20 per Sangha. May this cause all beings to attain Buddhahood quickly.

In November 2007, Rinpoche made the following comments about how to benefit the millions of turkeys killed for the Thanksgiving holiday. Two of his attendants and a student also made some comments on the day’s events, and the offerings that are made at Rinpoche’s house in California, Kachoe Dechen Ling. 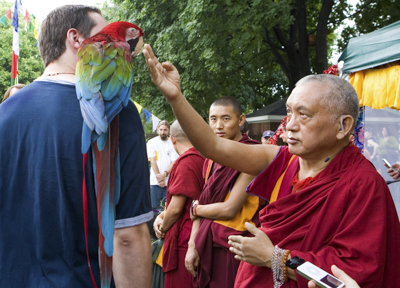 I was thinking about the 45 million turkeys that are killed for Thanksgiving Day. I felt I must do something for them—not have a dinner party at which we serve dead turkey, but something beneficial. At first I thought they might all be killed on that day itself, but later I found out that they’d been killed some time before that.

Another possibility could have been for us to do prostrations to the Thirty-five Buddhas, reciting these Buddhas’ names with prostrations, to purify the negative karma of the turkeys and all other sentient beings, including the people who killed the turkeys, but in this case it came out better to do Medicine Buddha puja.

Therefore, on Kachoe Dechen Ling’s 2007 Thanksgiving Day, vast skies of merit were collected with each seven limb practice done with each of the seven Medicine Buddhas and the Three Jewels of Refuge: Buddha, Dharma, and Sangha. We concluded with making extensive offerings and extensive rejoicing as well, dedicating our prayers and merit to the many millions of turkeys who died this year.

Probably, in previous lives, many millions of these turkeys were humans who killed turkeys for Thanksgiving. This means that unless they change their minds, the people who killed this year’s turkeys will be reborn as turkeys in the future and killed under similar circumstances. Perhaps as soon as next Thanksgiving, some of them will be eaten.

It’s just like fish caught by fishermen; those fish are trapped in a similar cycle. They were fishermen in previous lives, were reborn as fish this time, and then got caught by another fisherman, who killed them and sliced them up.

Turkeys are so powerless. If they could, I’m certain they’d demonstrate strongly against the humans who kill them. But if they did they’d probably get killed for that as well.

Attendant:
When, at about 8:00 pm, Rinpoche realized it was Thanksgiving Day, he immediately asked if the turkeys had already been killed. I told him that they would all be dead by now.

Then Rinpoche said the following:

“If the animals could speak they would express themselves in many ways; they would demonstrate. We’d see them protesting on TV and on the cover of Time Magazine, demanding the right to live, to continue living, and be protected from being slaughtered in such huge numbers.

Then Rinpoche, the Sangha and the student did an extensive, six-hour Medicine Buddha puja for the turkeys that have been killed. Rinpoche asked the student to describe it.

Student:
I remember getting to the house at about 4:00 pm, and shortly after I was in the presence of Rinpoche, in his room, with his attendant and some of the Sangha, and Rinpoche’s dog, Om Mani Padme Hum, was also there. I thought, “Great! That dog is so lucky. I wonder how all these imprints will ripen for her.”

Anyway, Rinpoche inquired about the killing of turkeys for Thanksgiving and was told that they are all killed in advance, since all the supermarkets are packed with frozen birds, all piled up like a mountain.

Rinpoche put great emphasis on the seven limb practice. During the first three rounds, he gave a lot of guided meditation; after that, he guided less, but still left long pauses for meditation. I understood that because he had already explained the details of how to meditate, we were supposed to bring those details to mind. Anyway, I always find new ways of thinking and sources of inspiration during pujas with Rinpoche. He is so kind to show to us how we are supposed to think during the various steps—this time, during the offering section, Rinpoche started to add in visualizations all the offerings made in the houses of some of his students around the world.

Then, during the confession limb, we went really deep, with long, single-pointed moments, thinking, “Now all my negative karma has been totally purified, gone; not a trace of my beginningless negative karma is left.” These periods were so long that the first couple of times I had trouble keeping focus, especially because of the various degrees of pain arising in different parts of my body.

The rejoicing limb was also done very systematically, with emphasis on different objects in each round, such as one’s own merits in the first round, the merits of other sentient beings in the next, and so forth. For the buddhas’ and bodhisattvas’ merits, Rinpoche specifically mentioned three things: their merits, their qualities, and their beneficial activities for sentient beings. I can’t speak for the others, but for me it was a particularly powerful meditation. In fact, the whole puja was extremely powerful.

After the first hour and a half of pain, trying to focus, and fighting sleep, it suddenly became very easy and blissful to follow Rinpoche’s meditation. Right then I thought it was really very effective. I even mentioned to Rinpoche at the end that the confession was so thorough that after some time it was difficult even to think about any leftover negativities, like they really were all gone. But as one of the Sangha rightly remarked, “Yes, and now you can start accumulating them all over again!”

However, Rinpoche told me, “You see how powerful the seven limbs are; you can accomplish so much just by doing that practice.” I went back home thinking that something had changed inside, how beneficial the Medicine Buddha practice is, and how unbelievable my Guru is. All it takes is to just open up, like in the confession practice, to the Guru’s face, and it all just comes together. Right then it actually seemed quite easy, the solution.

Attendant: Extensive Offerings
Over 300 water bowls with perfect saffron and clean sparkling water are offered each day at Rinpoche’s house. More than 7,000 Christmas lights are offered around the house and on the stupa. There are lotus lights, tiny sparkling lights and ropes of lights surrounding the whole house. The garden is filled with as many flowers as possible, and inside are flowers, candles, incense, and crystal offerings.

In pujas, during the offering limb, Rinpoche plays cymbals, other Sangha play drums, conch, and bell, and we play a CD of Kopan monks on the gyaling. Incense is brought in and all the lights are turned on (including those in the bathroom, which are very bright).