The Four Immeasurable Thoughts is based on various teachings by Lama Zopa Rinpoche. 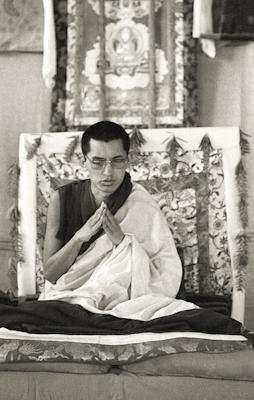 The four immeasurables practice is performed as part of the third of the six preparatory practices. Before engaging in this meditation one should clean the meditation room, set up an altar with beautifully arranged offerings, sit in the correct position and generate a good motivation. These points are all clearly explained in the lam-rim and can be understood by studying Kyabje Pabongka Rinpoche’s Liberation in the Palm of Your Hand or Lama Zopa Rinpoche’s Ganden Lha Gyäma commentary.

These four immeasurables are practiced on the basis of having taken refuge. Refuge is a preliminary for all genuine Buddhist practice. There are short and extensive ways of visualizing the refuge objects and going for refuge.

An extensive version is described in the jor-chö practice (and Rinpoche’s integrated Lama Chöpa Jor-chö). The central figure of the refuge field is one’s guru in the aspect of Shakyamuni Buddha surrounded by the root and lineage gurus, yidams, Dharma texts, buddhas, bodhisattvas, solitary realizers, hearer arhats, dakas and dakinis, and protectors. This is not too extensive and not too short. The concise visualization for refuge is to simply visualize Shakyamuni Buddha with the awareness that he is inseparable from your guru and simultaneously embodies all other objects of refuge. The concise visualization is described in Rinpoche’s Daily Meditation Practice in FPMT Essential Buddhist Prayers Vol. 1. The extensive and concise visualizations can be alternated depending on time and mental ability.

Surrounding oneself are all sentient beings in human form, but undergoing the pitiful sufferings of whatever realm they are currently experiencing.

Taking up the responsibility to free these beings from their suffering one contemplates the beginningless, relentless, all-pervasive nature of suffering in samsara, the good fortune of having attained a qualified human rebirth and fully qualified lamas2 and complete teachings, the endless experience of suffering one will have to undergo if this opportunity is not used and the fact that there are those who have the power to protect all beings from these sufferings and guide them to enlightenment.

Who has such power? Only the Guru, Buddha, Dharma and Sangha—in brief, the Three Jewels and the Lama who encompasses them all. Again, there is a guided meditation to generate this motivation both in the jor-chö and Rinpoche’s Daily Meditation Practice.

Having thought carefully about this and generated an intensive fear, strong faith and compassion for all sentient beings take refuge from the heart with a deep devotion to these objects of refuge, completely relying on them with a strong determination to achieve enlightenment for the sake of all living beings.

At this point one can recite either the formula for refuge to each of the four jewels in turn followed by Lama Atisha’s combined refuge and bodhicitta prayer3 or either one of these.

When doing Lama Tsongkhapa or six session yoga, etc. although the full visualization of the refuge field and the motivation are not explicitly mentioned, still it can be done this way because it is implied.

After taking refuge and entrusting oneself from the heart with a pure motivation think the guru in the aspect of Shakyamuni Buddha is extremely pleased and a replica absorbs into you. Then you instantly transform into Shakyamuni Buddha with a golden radiating light body.4 From every pore of our holy body light rays radiate touching all sentient beings. They purify and transform every one of them into the state of enlightenment. Feel great joy at having accomplished your goal.

Now recollect that this is just happening in your imagination. In reality sentient beings are not yet enlightened because they still under the power of the discriminating thoughts of attachment and hatred. Think, “I must generate the four immeasurable thoughts”.

1  Normally this practice is done in the context of a guru yoga such as Lama Chöpa, Lama Tsongkhapa Guru Yoga, six session yoga or Daily Meditation Practice. See the advice given to participants of Compassion Training. There, Rinpoche mentions adding a request to the lineage lamas and a lam-rim prayer if doing the practice on the basis of six session. Rinpoche also mentions that the meditation can be done while reciting OM MANI PADME HUM mantra, so that merit is created with the speech as well as the mind. Of course, if you are accumulating a number of recitations of the four immeasurables prayer, this could be different, but here is the quote from Rinpoche as an example of how to integrate the recitations with the practice: “Recite 7,000 malas of Chenrezig mantra; 1,000 for each of the six realms and 1,000 for the intermediate state. These mantras are to be recited as a gift for them. While meditating on bodhicitta with the mind, recite the mantra with the mouth, using the mouth to collect merit. We need to receive the blessings of the deity in order to transform the mind into compassion.”  [Return to text]

2  Rinpoche adds to the text after “so difficult to meet” quote: “and the virtuous friend who reveals the unmistaken complete path to enlightenment which is extremely rare to find”.[Return to text]

3  Lama Atisha’s combined refuge and bodhicitta prayer is one of the most commonly recited prayers and can be found everywhere. The first two lines “I go for refuge until I am enlightened to the Buddha, Dharma and Highest Assembly” express the entrustment of refuge; the second two “By the virtuous merit that I create by practicing generosity and the other perfections may I attain the state of a Buddha in order to benefit all sentient beings” express bodhicitta. It is usually recited three times, but can be recited as many times as one wishes. Rinpoche has given several meditations and instructions on how to perform this prayer. [Return to text]

4  Normally we need to receive an initiation to generate ourselves into a deity, but Rinpoche has explained that it is not so in this case. Anyone can absorb Shakyamuni Buddha and arise in that form on the basis of having taken refuge and generated bodhicitta. [Return to text]

Editor's Introduction: The Preliminaries
The Prayer and the Practice