This Precious Human Life is a Miracle

This Precious Human Life is a Miracle

Rinpoche sent this letter to a thirteen-year-old who was suicidal and self-harming. The child’s mother was a student of Rinpoche. 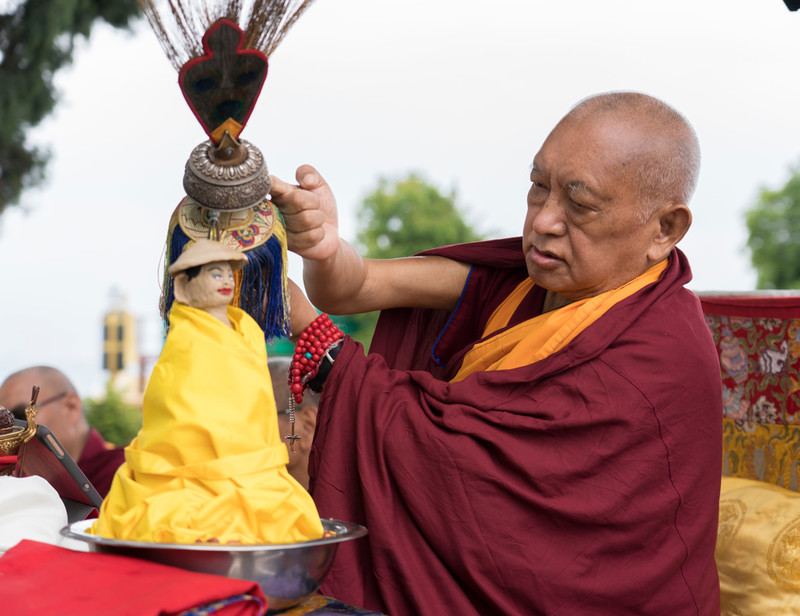 My most dear, most precious, most kind, wish-fulfilling one,
This precious human life is a miracle and we have received it this time. It’s almost impossible to achieve again, but somehow this time it happened. It’s difficult to achieve, but it doesn’t last long.

In the world today, beings can die in their mother’s womb as the consciousness is received or they die after they come out of the mother’s womb, or they are born but they have no karma to grow, and they die when they are children. People also die in middle age and old age, and even today people are dying. So there are all kinds of ways sentient beings can die.

Therefore, we can’t say one hundred percent that we will live for a long time. Therefore, it’s very important that during our life we don’t waste time and our life becomes most beneficial. This is so that we will have a happy life—not ordinary happiness, but Dharma happiness, for the mind to be healthy, positive and virtuous.

Let me explain, as it takes time to understand. Perhaps now you don’t understand completely, but it’s very, very important to understand this. The understanding—knowing about the meaning of life—will come later.

First of all, we should engage in actions of body, speech and mind which are positive, healthy and virtuous. This Dharma stops us from being born in the hells, as a hungry ghost or in the animal realm, and causes us to be born as humans and devas. The best type of rebirth is a perfect human rebirth, qualified with the eight freedoms and ten richnesses.

The devas experience pleasure which is many hundreds, thousands or millions of times greater than humans, but it is samsaric pleasure, which is just suffering. They are born and stay there [in the deva realm] for a long time, but when the karma finishes, then they’re reborn in the lower realms. We’ve done this numberless times.

For humans, what is supposed to be a good human rebirth is being able to meet the Dharma and then [having the opportunity to] practice Dharma. Then through that, we become free from samsara, the ocean of samsaric suffering, and not only that, we also achieve peerless happiness, buddhahood, the total cessation of gross and subtle obscurations, and the completion of realizations for sentient beings.

The second thing is that when our actions of body, speech, and mind become holy Dharma, positive, healthy, virtuous, that which causes us to become free from the oceans of samsaric suffering, free from all the worries, fears, depression, everything, then we can achieve ultimate happiness, liberation from samsara for ourselves.

Thirdly, our actions of body, speech, and mind become holy Dharma—the best Dharma, the most pure, the most healthy—when our actions are done with the ultimate good heart of bodhicitta. With that [good heart] everything becomes the cause of omniscience, the total cessation of obscurations and the completion of realizations, enlightenment. Then we can free other numberless beings from the three lower realms—the hells, the hungry ghost realm and the animal realm—and not only that, we can free them from the oceans of samsaric suffering forever, and not only that, we can bring them to peerless happiness, the cessation of suffering and the completion of realizations.

So we must know the meaning of life, and what is that? To not harm sentient beings and to benefit them in whatever way we can. So the more we learn Dharma, the more our learning and practice becomes deeper and deeper, greater and greater, more and more advanced, in order to benefit others, to bring happiness to others.

Even benefiting the ants looking for food. I’m using the example of giving charity to ants by giving them small pieces of food, sugar or whatever they like. In Washington, I have two monks who do water bowls and take care of the house. They do many water bowl offerings to the Buddha, Dharma and Sangha.

There’s one monk, Tharchin, who goes to make charity to the ants for several hours every week. There are so many ant nests, like hundreds sometimes, or less. There’s tsampa, which is like wheat flour, and it is mixed with blessed water which is blessed with mantras. There’s also Padmasambhava, a great enlightened being, whose mantra is carved on crystal and that also blesses the water. Then there are His Holiness’s OM MANI PADME HUM pills. [The monks in Washington] recite mantras on the tsampa, so it is able to not only stop hunger, but to purify the mind so that the ants don’t get reborn in the lower realms. So the monks do like that.

Also, each week we buy many worms, which are used as fishing bait, and we liberate them in the right place. Before liberating them we take them around inside where there are many tsa tsas and buddha statues. We take them around the holy objects like that. Outside there’s a Medicine Buddha made of volcanic material from Indonesia. Then we have an Amitabha from Vietnam, carved from marble, which was being painted, a big one. And now we have the bodhisattva Ksitigarbha donated by somebody in America.

We take the worms around the holy objects in two buckets and we recite mantras, so then the worms purify the karma to be born in the lower realms and they create the karma to achieve enlightenment. It is not only freeing them from samsara; however many times they go around the holy objects, that many times it creates the cause of enlightenment. So those worms are incredibly, incredibly fortunate compared to many people in the world who have no opportunity like that, even though they may be millionaires or billionaires.

In Aptos, California, we also make charity [to the animals] each week. Sometimes we also liberate frogs and other different animals, like that. We do this not only in those two places, but also in other places in China. In the past we did it in Hong Kong and now we do it in Singapore, like that.

The idea is that even in a bus or another type of vehicle where people don’t have seats, you can offer your seat to others. You can try to benefit and help others even with small things as much as possible. Or just as an example, you can help a beggar on the road or if someone is carrying a heavy load which is difficult, you can help them carry it.

You can help insects on the road so they don’t get stepped on and killed. If you kill them the consequence is that for five hundred lives you are killed. And even you don’t kill them, you can blow them away or put them on the side [of the road or pathway] so that others don’t step on them. Whatever small benefit you can do, that’s so good.

So it’s very, very, very important for you to know what is the meaning of life. Yes, it’s not to suffer, but to enjoy life. The way to do that is to not harm others and to benefit others, that’s the best way.

The Buddha said in the Arya Sanghata Sutra that even if you make charity the size of a hair to a sentient being, the result is that in all your future lives you will have so much happiness and wealth. All your wishes will succeed and you will have a healthy life, on and on.

Like the Hindus who worship Indra and Brahma, you will have that power, then ultimately, you will achieve buddhahood, enlightenment. So this is how to live your life—not to harm, but to benefit others as much as you can. This is how to enjoy the life, how to make the life happy. This is the way.

There are many other wrong ways, hallucinated ways to have a happy life with a hallucinated, negative mind. You’ll understand this gradually the more you read Dharma books, slowly, slowly. You don’t have to worry.

So thank you very, very, very much. I talked quite a bit, I’m very sorry for that. I hope you can understand. This advice is for you, and also, from my side, it is for your stepmother. If you have questions, I can try to answer them.