In this letter, Rinpoche advised a student to do two thousand nyung näs. Rinpoche also wrote about the power of nyung näs and the importance of generating the correct motivation for the practice. 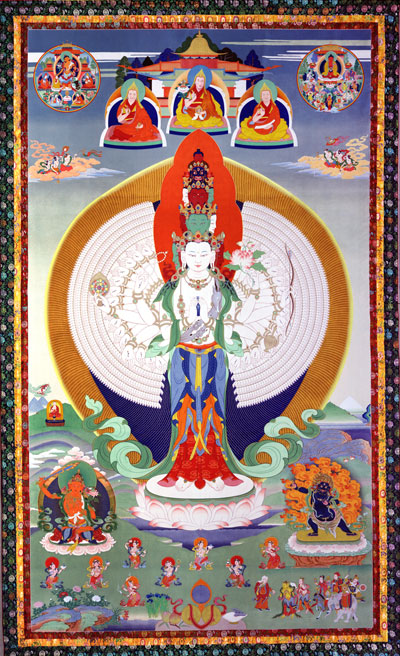 My most dear, most kind, most precious, wish-fulfilling one,
Not so many other preliminary practices came out [in my observation], but what came out is for you to do two thousand nyung näs. This is what Geshe Lama Konchog and many other disciples of Drupa Rinpoche did also.

Drupa Rinpoche was a great lama, who first became a lharampa geshe and then took teachings and initiations from other sects and other lamas. He then benefited so many sentient beings in the Himalayan Mountains. He organized many one hundred million OM MANI PADME HUM recitations for the people in many places, and he also started monasteries and nunneries that are still there. Now there are more nunneries.

The incarnation is in Nepal or around. He was not well, so he asked me to look after his monastery and nunnery in Tsum, which is close to Tibet. So we took care of the monastery and nunnery, and built a new monastery and developed it in many ways, with social service and education and debate and Buddhist philosophy. [See FPMT's Tsum Project.]

For you, nyung nä is a great preliminary practice, so do two thousand; do as many as you can, it’s so good. This is the most powerful way to purify negative karma collected from beginningless rebirth and to collect extensive merit and in particular to develop compassion for all sentient beings. By developing compassion you will achieve enlightenment quickly, and that means you are able to free the numberless sentient beings from the oceans of samsaric sufferings quickly and bring them to buddhahood quickly, by yourself.

You can do that and also study Dharma always. Sometimes you can do more retreat and meditation, and sometimes do more study, or sometimes do these things together.

Advice given to a student who had a bladder infection and asked Rinpoche about drinking fluid when doing nyung näs. 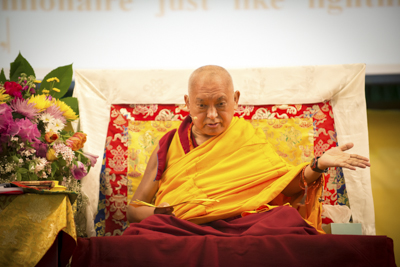 My dear one,
Thank you very much for your kind letter.

First of all, having a bladder problem after five nyung näs is a positive sign, a very positive sign. Why? Because by doing nyung näs generally it is said that 40,000 eons of negative karma are purified.

If you recite ten malas a day, when your body goes in the water that water is blessed and all the numberless animals, big and small, that are in the water, get purified. By you touching the water it purifies all their defilements. Also, people who play in the water or drink the water get the same benefit. It is unbelievable. Even the air that touches the person who recites ten malas of OM MANI PADME HUM is blessed. When that person is walking outside, the air is blessed and it purifies negative karma and can lead to a higher rebirth. If the air touches others then they are also purified and can have a higher rebirth, like that.

This is an unbelievably precious practice for your body, so I think whatever comes on your body and then touch other beings, it purifies them. Whatever comes from your body, such as pipi, etc., can purify others. Also, seven generations of family starting from you, your children and grandchildren up to seven generations don’t go to the lower realms. Then also when your body is burned [cremated] if the smoke that comes from that touches others, even the smell can purify them. These are the benefits of reciting ten malas of OM MANI PADME HUM.

There is also the very long mantra of Chenrezig, it is in a text by Songtsen Gampo, the Dharma king in Tibet. Normally if you are able to do more than ten malas it is unbelievable, so doing as much as you can is very important, especially if you recite the mantra with bodhicitta. It benefits so many sentient beings and you collect more than skies of merit by reciting the mantra even one time with bodhicitta. That is very important, most important.

Medicine Buddha practice is also something you should practice for your whole life; the benefits are unbelievable. The reason you are experiencing bladder problems is because it’s the result of heavy negative karma collected since beginningless lives and this is purified by doing the nyung näs. This is how you purify past negative karma that would result in suffering, such as being born in the hells for eons. That karma is purified and you will not have to experience it at all.

Or you don’t have to experience it, but it still manifests as some problem in this life, such as a disaster, a car accident, a disease like cancer, or whatever. That is very positive because it means you don’t have to be born in hell and experience the inconceivable suffering for eons; instead the karma manifests as a disaster in this life and in this way it is finished.

If you still have to be born in the lower realms, because you have purified the karma it will be for a very short time, like throwing a stone on a rock. The stone just touches the rock then it stops thus you don’t have to have continual suffering, so that’s good. The suffering is shorter. These are some of the different levels of purifying negative karma.

The other thing for the bladder is for you to meet with a Tibetan doctor in India or Nepal.

Lama Tsongkhapa did 700,000 prostrations by reciting the names of the Thirty-five Buddhas in Wolka Cholung in Tibet, then he had many realizations.

If you can, read the Vajra Cutter Sutra. See if you can do that once each week at least. It’s very good.

Advice given to a student who had written to Rinpoche about life obstacles and whether to do nyung näs.

There seems to be some obstacle to your life, therefore you need to liberate at least forty animals. These are animals that would otherwise be killed, so this means saving their lives.

Sometimes nyung näs are very powerful and by doing all the purification, by doing nyung näs, many heavy negative karmas get purified. This karma otherwise causes us to be reborn for eons in hell, so it is purified and maybe manifests as certain sicknesses now or as some problem in this life.

By experiencing this sickness or problem now, then in the future our life is like the sun rising, with so much happiness. There is happiness up to enlightenment, also happiness in our future lives for hundreds or thousands or millions of lives, then liberation from samsara. We don’t need to be born back in the lower realms and suffer for eons, and there is happiness up to enlightenment. For this, we have to experience some problems now in this life. Sometimes it is like that, but not all the time.

You need to liberate animals. This is important. For example, in Singapore you can buy crickets in a plastic bag, so there are one thousand crickets, then you can carry them around the stupa to purify them and bring them to enlightenment. You can do that with two thousand or three thousand crickets. See if you can get many animals, like crickets or worms.

You can also recite different mantras while you take the animals around holy objects. Anyway, the monks at Nalanda will know how to do this.

Anyway, I checked and yes, it is very good for you to do the nyung näs. Also, you should take the long life initiation, Amitayus initiation.

This is my advice. Please make your life most meaningful with the thought of bodhicitta day and night and in every activity you do.

Rinpoche explained the importance of purification and advised nyung nä and lam-rim as the main practices for a new student.

My most dear, most kind, most precious, wish-fulfilling one,
I am not sure if you also participated in the Vajrasattva retreat, anyway, for all those who did, thank you so much for your Vajrasattva practice. That is the conclusion of everything. Even if you learned the whole sutra and tantra, all the 84,000 teachings of Buddha, the conclusion of all of that is to practice Dharma and purify negative karmas collected from beginningless time.

According to my observation, the main lam-rim text for you to study is Lam-rim Chen-mo. This is the elaborate commentary on the graduated path to enlightenment. Please study the Lam-rim Chen-mo four times, then do the meditations by following the lam-rim outline or The Essential Nectar.

In regards to the Lam-rim Chen-mo, the part on emptiness, there is a whole debate, negation of the many different wrong views, so maybe for the section on emptiness use Lama Tsongkhapa’s Middling Lam-rim more. After circling this way until you have stable realizations, then do the effortless meditation on the lam-rim.

Nyung nä retreat is to purify the defilements quickly and to be able to go to a pure land quickly. It comes out for your main practice to be nyung näs. By doing one nyung nä well, you won’t be reborn in the lower realms and in this life you don’t have to worry. The best practice for yourself and for others is for you to do nyung näs.

If you can, try to complete one thousand nyung näs, but you don’t have to worry; do the practice whenever you find time, whenever you feel comfortable. Take it easy, and if you can, try this. Other preliminary practices didn’t come out for you, just nyung näs and lam-rim. This is the quickest way to free the numberless sentient beings from the oceans of samsara and to achieve enlightenment.

Nyung näs came out best according to my observation, so do them as much as you can. First you need to know well how to do nyung näs, then you can do them by yourself and you can help other people do them. You can lead the nyung nä if you know the practice well. This is a quick way to purify all the sufferings and obscurations. It is so good, the best practice, especially to develop compassion toward sentient beings and to achieve the state of omniscient mind. Whether you achieve enlightenment quickly or not depends on whether you quickly generate compassion.

According to my observation, your main deity is Gyalwa Gyatso and the other deity is Secret Vajrapani.  Your deity is whichever you feel closest to and have the strongest feeling for. You can take the initiation later when you have the opportunity.

Please try to practice this way and live your life as much as possible with the thought of bodhicitta in every action you do.

Rinpoche gave this advice to a center that was arranging a 108 nyung-nä retreat.

There is an obstacle, so you should do the following:

A student asked Rinpoche about doing 108 nyung-näs. The nyung-nä is a two-day retreat that involves fasting, prostrations and silence.

Of course it is incredibly, incredibly beneficial to do 108 nyung-näs; that really isn't a question!

700 nyung-näs seems good for you to do, possibly to realize what you asked. Bodhicitta is the most critical for enlightenment. You must keep that in mind.