It’s Better to Be a Monk

It’s Better to Be a Monk

A monk wrote that he no longer wanted to be ordained. Rinpoche advised the monk to meditate on the lamrim and to remember that real happiness comes from renouncing the eight worldly concerns and attachment to this life. 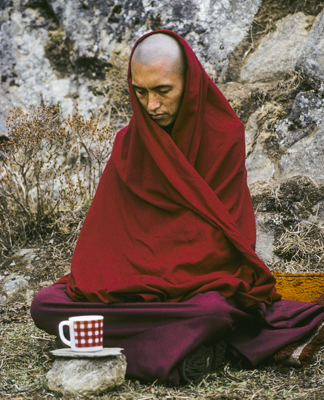 What you are saying is that by following attachment to the worldly life, to the eight worldly concerns, attachment to this life, then real happiness will come. In reality, if you follow this way you will not find ultimate happiness, you won’t find enlightenment. You need to really think about how it is incredibly hard to find a perfect human rebirth, and even rarer to be able to meet the Dharma and then to study Dharma and then to practice Dharma. It’s unbelievable difficult.

If you feel you don’t have happiness in your life, it’s because you haven’t renounced the eight worldly dharmas, so then you have attachment to this life. If you feel you didn’t get happiness, then you need to think about this more. Real happiness comes from giving up the eight worldly dharmas, attachment to this life. Real Dharma happiness comes from that, not from other things.

So you need to think about this again.

Also you need renunciation of this life, so meditate on the graduated path of the lower capable being, from the lamrim. This means the perfect human rebirth—how to make it most beneficial in three ways, and the difficulty of finding it again, how it is extremely difficult to find again.

Then the nine-round meditation on impermanence and death, not only the general death meditation, but that death can happen at any time. Meditate on what helps at the death time. Even if we have billions of dollars or employ billions of people, it doesn’t help at all. Any material possessions have to be left, even our body has to be left, our friends and family leave us and we have to leave them. Only Dharma can benefit up to enlightenment, including future lives’ happiness and ultimate happiness, becoming free from samsara, the peerless happiness buddhahood. All of that is only from Dharma.

Meditating on the lower realms gives us incredible happiness. Being born as a human being and becoming a monk—wow, wow, wow! Especially being a monk, it is so easy to practice Dharma—wow, wow, wow!

You didn’t get to meditate on the lamrim, especially this part. Then you are just doing prayers, just between the lips, generating bodhicitta just becomes words, not in the heart, and then the mind falls back into the worldly life, and is only involved in the attachment, worldly concern. Then the pleasure of this life arises so strong, stronger, then you follow that. You think that as a layperson you will feel a lot of happiness and freedom, and being a monk has no freedom.

Actually, being a monk gives you unbelievable freedom, peace and happiness in this life, because as you are more renounced, you have less worldly concern and less attachment to this life, to this life’s pleasure and especially less attachment to samsara, and you will have more happiness in future lives. So you can see being a layperson is more suffering—wow, wow, wow—whereas being a monk gives you so much pleasure and happiness, inner happiness.

Then you can see how our samsara is more in the nature of suffering and when you think of others you will feel that much compassion. There are numberless beings suffering in this realm and you see unbelievable suffering. You can’t understand it, you can’t imagine it, you can’t even breath if you think about the numberless sentient beings’ suffering in samsara in the numberless realms. Wow, wow, wow! Then from there you want to free them from the oceans of samsara’s suffering, and from there compassion arises, and then from that bodhicitta arises. To do that by yourself, you need to achieve the state of omniscience in order to do perfect works for all sentient beings, so you need to achieve buddhahood, the peerless happiness totally free from all obscurations and completion of all the realizations. Bodhicitta becomes very strong like that. So reading this text and meditating is so important.

Every day meditate on those lamrim subjects; that brings the mind closer and closer to the realizations. This is very important, unbelievable, so you have to understand this. If you don’t do that meditation on the lamrim, those graduated paths, at least renunciation of this life and the next life, how samsara is in the nature of suffering, if you don’t do that, then everything just becomes words and there is no connection in the heart. Then you see lay life as much better and you don’t see the suffering.

It’s like entering a war [zone], or like entering a place where there are tigers or cemeteries, where there are a lot of spiders or those who eat human beings, or a place where there are a lot of tigers that will eat you or eat other human beings. It is like that in reality, it’s like that, but you see being a layperson as having so much freedom and happiness, and you see the monk’s life as having no freedom. So the block has come from you, not from others. It’s come from not meditating on the lamrim, not trying to make the mind closer and closer to realizations, even the first two—renouncing this life and renouncing future lives.

As an example, there was a monk in Sera Je who became expert in sutra and tantra. He was a very intelligent debater in the monastery when he was monk, and he finished his geshe studies. He taught Guhyasamaja and did retreat and maybe he had a good understanding and experience of Guhyasamaja. I think some young girl students liked him when he was monk, but when he disrobed those girls didn’t like him anymore.

When he came back to Sera, the Kopan monks in one khangtsen asked him to give a talk. He gave a talk and he told the monks, “Don’t get distracted. Don’t get attracted to girls, to what you believe is beautiful; don’t allow yourself distractions.” In other words, he didn’t say this, but my commentary is this, “Don’t get distracted by believing the hallucination of beautiful girls is real. It is a hallucination, don’t believe it is real.”

He said, “Don’t be attached, don’t get distracted.” So now he realized what a great mistake he had made, because he was learned in Dharma. Now he realized what a great mistake he had made, changing his life, being attracted to the girls and external things, the body, etc. Of course, inside it’s all the same. No one is more beautiful than another, it’s all the same, flesh, skeleton, and just on the outside is the skin, which is kind of filled up by the skeleton. If the skin is taken away and put there next to the skeleton and the flesh, then we don’t find any beauty there, we get scared by seeing the skin. Even when blood comes out of the body, we get scared.

What we are attached to is the appearance in our mind; it is the appearance in our mind that we are attached to, attachment to the skin. We get attached to that object and that’s because on the basis of the object we have ignorance, holding that object as truly existent, thinking that it exists from its own side, that it exists by nature, but it is totally built on a hallucination, which is not there. We think it is truly existent, the real thing, the real beauty. Also, if we use a magnifying glass we see the skin as a lot of mountains, like bubbles, we see a lot of things. The view that we saw before doesn’t stay, it’s not there.

The monk from Sera Je regretted [disrobing] very much. It destroyed his life, he was cheated by his wrong concepts, by not being careful.

Also Lama Tsongkhapa said in a tantra text, maybe in a lamrim tantra text, the best practitioner of tantra is a gelong. So you have to think about that.

To be very clear, it is to do with attachment—because of being attached to the happiness of this life, then there is dislike. When there is discomfort, problems, however much attachment we have to pleasure, the happiness in this life, then our dislike, anger, the problems and discomfort in this life is that much stronger. That’s what I am telling you and also this is scientific.

So they totally depend on each other, like that. If we don’t have attachment to those four desirable objects, if we renounce them, then we don’t have as much unhappiness, and that dislike and anger doesn’t happen. So it’s completely related. We need to think about this and to analyze it. It’s so simple to understand, it’s very important to meditate on that.

You have to think about this and read the section on karma, and understand that the four happinesses arise from the ten virtues and the four suffering results arise from the ten nonvirtues. You need to think about all those details, then you can understand why you should be monk and not a layperson. Then you can understand; then you think you would be wasting your life [as a layperson]. It’s like living in a prison, so becoming a layperson is the actual prison, like jumping into the fire, as I said before, where there are a lot of tigers which eat human beings. You are going there without knowing, thinking it’s a great pleasure park; you think it’s a beautiful park.

Especially if you think of the suffering sentient beings, the numberless suffering sentient beings in each realm, then there is no way to be a layperson, even for a day, a minute, a second. Being a monk is a much better opportunity to practice morality. So by practicing morality, then we are able to generate bodhicitta, compassion to others; we are able to generate bodhicitta and we are able to achieve enlightenment quickly; we are able to achieve all the happinesses by renouncing and letting go of the attachment to the worldly concerns, the four desirable objects. There is so much inner happiness by having renunciation of the future life’s samsara, there is so much happiness, then by being free from samsara we attain ultimate happiness, the unbelievable blissful state of peace. We then have the peerless happiness.

Please don’t ignore these things. Even in my observation for you, it is like that. It is the worst thing if you are going to become a layperson.

Thank you. Please enjoy your life. Life is short and death can happen any day, any night, even today. Think about this. Read Pabongka Rinpoche’s instructions on impermanence and death, if you don’t have the text someone else may have it. So do that. If you read that then you can understand.