Rinpoche advised several pujas and practices for a center which had termites. Rinpoche also said the center should not kill the termites and they should take the termite-infested wood out to the forest instead. 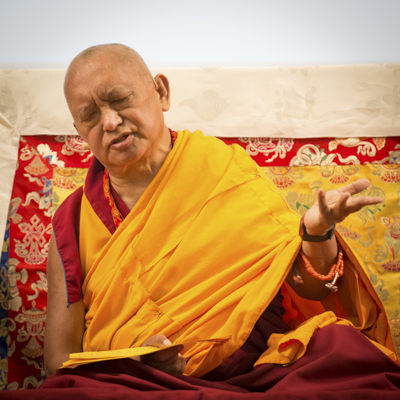 Recite the Vajra Cutter Sutra for at least two months and do sur at the center. In the morning, do the practice Offering Water Charity to the Pretas. This begins with Dzambhala, [offering] the three types of water and three or more foods. If you can do it where there’s running water, that’s good.

In the Taipei center, around seven years ago, a nun wrote that there were termites. Where there’s wood with termites don’t kill them. Instead take that wood out to a forest or a similar place, then the termites will have something to eat. Then change the wood.

One way of explaining this is, as the Buddha said, all dharmas are created by mind. Mind is the principal and mind goes before body and speech. For example, by thinking with a good heart, then we can talk to someone and they receive happiness from that. We talk with a good heart to benefit them.

When there’s sun, the shadow always follows the body. Similarly, phenomena are created by mind and mind is the principal, the preliminary. If we talk with a bad heart to somebody, then suffering comes from that. Take the example of a carriage or cart pulled by an ox in India. The ox pulls the cart, which carries pipes, iron and people on top. When it’s hot, the ox cannot express its suffering. Also, people may beat the ox or it carries its load for many hours. This is the result of creating negative karma in the past, of harming sentient beings and their enjoyments.

Also, there’s advice in The Wheel of Sharp Weapons.1 Lama Atisha had 157 teachers and of those, he had two root gurus. He had incredible devotion to Lama Serlingpa and Dharmarakshita. He travelled for thirteen months and spent twelve years in Sumatra, receiving teachings from Lama Serlingpa, like [pouring nectar] from one pot to another and receiving everything, completely.

In The Wheel of Sharp Weapons (v. 10), Dharmarakshita said:

Whenever an intolerable ailment arises in our body,
It is the sharp weapons of bad actions turning against us
For having inflicted harm on the bodies of migrating beings.
Now we should willingly take upon ourselves all ailments without exception.

When heavy pain comes to the body, it’s because we gave harm to the bodies of transmigratory beings in the past. The wheel of sharp weapons, the negative karma has turned on us, therefore, now, take all the sentient beings’ pain on oneself. Take every single pain on oneself.

So, it’s the same as with this teaching. The Wheel of Sharp Weapons is so good. You can read it individually or together.

The Kopan monks do a protector puja to Palden Lhamo, [who embodies] wrathful actions done with compassion. At that time, they read this text, The Wheel of Sharp Weapons. Usually they do the puja fast, with drums and cymbals being played in a wrathful way. At first they didn’t do it fast, but it fits to do it fast, it’s like scolding or angry.

I have a sur text on the basis of Panchen Lama Chokyi Gyaltsen’s lineage of Gyalwa Ensapa, Lama Tsongkhapa’s disciple.2 Ensapa became enlightened easily and comfortably in one life, eating pizza and drinking milkshakes—not like Milarepa who ate only nettles and when the thief came and ate, requesting chili and salt, there were only nettles to add. Ensapa did not have hardships like Milarepa did. Why was Gyalwa Ensapa comfortable to achieve enlightenment in one brief life?

First do the pujas and practices I mentioned, then gradually make the physical changes.

Rinpoche made the following comment on why we should not kill mosquitoes.

You should not kill mosquitoes at all. Your body is so big and they are so tiny. If their body was big and yours was tiny, you came to bite them and drink some blood, because you are so hungry, and all you needed was a small amount of blood to eat and drink, but they killed you, how would you feel? It is exactly the same situation.

A student killed 50 small ants on her balcony, and regretted the act immediately afterward. She wrote to Rinpoche to confess what she had done, and to say she planned to take the eight Mahayana precepts* one day for each ant she had killed. Rinpoche wrote her back.

My very dear Marion,
Thank you very much for your kind letter. It is amazing what you want to offer back to those ants. It is incredible! The thought to take precepts for each ant would not have come into my head. I am sure all the ants will jump up and down and clap their hands and have a party for you when you finish, wishing for you to receive all happiness…ha ha ha. I put my hands together at my heart thanking you very, very much on behalf of all the ants.

In addition, read the Diamond Cutter Sutra four times, and then recite the long Namgyalma mantra 21 times, if possible, or else seven times, and dedicate the merit to the ants’ quick enlightenment. They might become your disciples and do everything you say.

A Malaysian nun was living on the border between Singapore and Malaysia. She wrote to say that she was being bitten by many mosquitoes, and was having to kill them.

My dear Nena,
You should not kill mosquitoes at all. Your body is so big, and they are so tiny. What if their bodies were big and yours was tiny, and you came to bite them and drink a little of their blood, because you were hungry, and then they killed you? Even though all you need is a small amount of blood to eat and drink, instead they kill you. How does this look to you? This is exactly the same situation.

If you don’t purify yourself of these actions, you will have to suffer the result in future lives, and also in this life, especially because you are a nun. One of your vows is to abstain from killing. This is very basic. Even for lay people, it is a very basic practice, so it would be very, very sad if you killed, especially as a nun. Therefore, you need to perform these practices that I am sending you. (A list of practices was attached.)

You should do these practices gradually, to purify and to collect merit. You should also read the lam-rim, the gradual path to enlightenment, not only for your own happiness, but also for the peace and happiness of all sentient beings, especially the mosquitoes.

I am requesting you on behalf of all mosquitoes, please don’t kill. I will be the voice for all the mosquitoes.

The Mosquito is the Cause of Our Enlightenment
Benefiting Animals: Practices and Advice at fpmt.org