Refuge in Buddha, Dharma and Sangha: The Doctor, Medicine and Nurse

Lama Zopa Rinpoche explains why there is an urgent need for refuge in Buddha, Dharma and Sangha in this teaching given at the 36th Kopan Course, Kopan Monastery, Nepal, in 2003. Lightly edited by Gordon McDougall.

This excerpt from Lecture 6 of the course. Click here to read more. 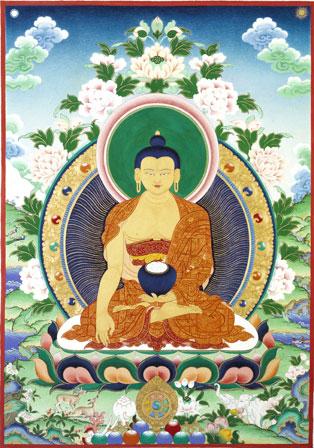 Now here, we can see that relying upon the Buddha, Dharma and Sangha is not just a custom. It is not just some custom that we act out; it is a really serious thing. There is utmost need to take refuge, utmost need.

The purpose of refuge is to liberate ourselves from all the causes of suffering, delusion and karma, all the causes including our negative karma. Now here, you see, taking refuge is not something small, it is really serious. There are no words to describe how utterly important it is. It is not just some fashion, like going to a church or a temple or lighting some incense or doing this or doing that, as a custom of that tradition or that religion. If we follow this religion, we have to do this and this, all the external things—it is not like that. Of course, in Buddhism there are rituals and they have great meaning however, what I am saying is that refuge is not just the outer acts, the external things we are expected to do if we follow some religion. Here, it is a very serious matter, a matter of great urgency, of great urgency.

But the reason for taking refuge doesn’t finish right there. Numberless sentient beings are suffering like ourselves and in order to free all of them from all those oceans of samsaric suffering and its causes, we take refuge in the Buddha, Dharma and Sangha, who have the qualities and the power to liberate us and all sentient beings from the oceans of samsaric suffering and its cause, delusion and karma.

With this vast understanding, this deep understanding of suffering and the cause—of our own and numberless sentient beings’ suffering—we generate compassion toward them, then rely upon Buddha, Dharma, Sangha. With that, we recite the prayer. Then the words and our heart go together.

The conventional Buddha is the sambhogakaya and nirmanakaya aspects of the rupakaya, that is the conventional Buddha. Then the absolute Buddha is the dharmakaya, the Buddha’s holy mind, within which there are two: the omniscient mind, that wisdom, and then its ultimate nature, which is totally free from defilements, the svabhavakaya, the holy truth body or the holy body of the essence.

Conventional Dharma refers to the scriptures, not just any scriptures but the Tripitaka teachings, which contain the lamrim. Absolute Dharma is the cessation of all suffering, of all delusions and karma. That includes not only lower nirvana, liberation from samsara, but also great liberation, full enlightenment, the cessation of even the subtle defilements. Then the path, the wisdom directly perceiving emptiness, which directly ceases the defilements—that is the true path. That’s also the Dharma, and we should rely upon it.

Then, we rely upon the Sangha who support us, who guide us to actualize the Dharma and to achieve enlightenment, to become a buddha—those who have the qualities to do that. [The absolute Sangha] have the realization of directly perceiving emptiness, the right-seeing path and path of meditation, then no more learning. The conventional Sangha is four or more nuns or monks living in full ordination but not having realization of the exalted path, the wisdom directly perceiving emptiness. That’s conventional Sangha. Here, we take refuge in both of them.