Lama Zopa Rinpoche discusses the benefits of Medicine Buddha practice in this teaching excerpt from the 36th Kopan Course held at Kopan Monastery, Nepal, in 2003. Rinpoche advises that Medicine Buddha can bring peace and happiness, as well as both inner prosperity and external prosperity. Lightly edited by Gordon McDougall.

This excerpt from Lecture 13 of the course. Click here to read more. 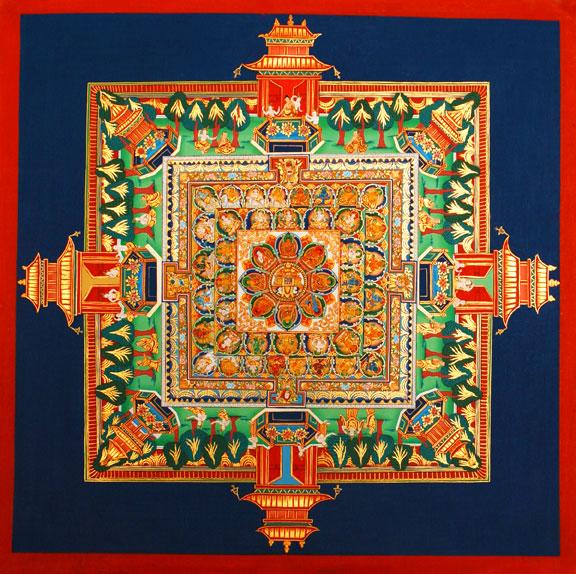 So, if centers have many expenses and need financial support, if they need external prosperity and inner prosperity, I would like to emphasize this. I did mention this to one person at a center in America, and I would like to emphasis that all the centers on the Tibetan eighth [of the month] should do Medicine Buddha puja. As the Fifth Dalai Lama explained how great success happened in Tibet because of this, it is the same with our centers. So, on the Tibetan eighth, please do Medicine Buddha puja. Normally many centers do Tara puja, especially the older centers, but I want to emphasize that all the centers, especially the organization, do Medicine Buddha puja. Many people love to do Tara puja, as a female deity, so you can do Tara puja in the afternoon or evening and do the Medicine Buddha puja in the morning, because you have to abstain from black food: onions, garlic and meat, things like that. Therefore, it’s good to do it in the morning, before the meal.

So, I thought that within the organization, the organizers don’t have to suffer, they don’t have to struggle with finances, they don’t have to struggle with so many things and they can have a very easy life with inner and outer prosperity. The organization has been developed over so many years with so much struggle, so many hardships, so much pain, struggling how to make the center more beneficial for sentient beings, how to make the center more accessible. With so much worry and fear, how to keep the center running, how to survive the next month. With many years of learning, going through so many hardships, so much pain, they have become really developed now, so beneficial; they are able to establish very good programs, good education, so people can learn Buddhist philosophy and do retreats. They have been able to create the conditions to offer this. Now, it is much better, much easier, because they have gained so much experience, building the experience for many, many years on how to do things. In the beginning, they had so much difficulty.

When the season of the drugs happened, when the karma of drugs happened—Buddha grass and LSD and all the other things—it opened, it broke many young people’s fixed solid concept, it broke that down. Somehow, they discovered or they felt that the mind could exist without the body; this was some idea through the drug experiences or whatever. At that time there were only two or three Dharma books, such as Lama Govinda’s book, the Tibetan Book of the Dead and Milarepa’s life story. That’s another great one! Through reading those books, they changed their minds and they came to search for a new life, a spiritual life. They came to the East, to India and Nepal, mainly to search for a new life, for something meaningful or some new thing. They got bored with their life in the Western society, and, being against that, according to their karma, some met Hindus, sadhus, according to their karma some met different lamas in India or here in Nepal.

For example, here at Kopan, by listening to the teachings they found much benefit for themselves. Then those young people wanted to go back to the West, to their own country; they wanted others also to have the same benefit. So, they started centers, meditation groups and like that. It started with nothing. Most of the centers started with nothing, not with a big fund. It started with a good heart but no money. They didn’t have experience of business, they had no business background, so then they got lots of debts and when they tried business they lost so much money.

The different centers developed due to so many people, but they started like that, with so much pain, so much hardship. For many years they bore so much hardship, they sacrificed their lives, they put so much effort into sustaining or helping the center survive, to continue the teachings. Now it’s like a flower blossoming; now it becomes so beneficial and now there are much better conditions. As I mentioned, Kopan was very primitive before; in the past it was extremely primitive. Now, there are much better conditions. So many other centers are also better.

Of course, individual beings also practice Medicine Buddha. On the Tibetan eighth they do the Medicine Buddha puja, the long version or short version. I mean, the long version is not possible now but the middle version is there. If the centers could do the Medicine Buddha in the morning, and then do the Tara puja later in the evening, something like that. I thought this, after finding out what the Fifth Dalai Lama emphasized so much, how it brings great prosperity and so much peace and happiness and fulfills all the wishes. All the wishes come true, especially spreading the Dharma.

Reading that, I thought to do the same in the FPMT centers, to make life much easier, without so much worry and fear, so much struggle. You start the work at the beginning with a good heart but with so much financial burden and so many problems, then after some time you don’t have time to meditate, to continuously meditate on lamrim, which is like recharging a battery. You are unable to recharge your mental battery by meditating on the lamrim, because that continuation didn’t happen with all the hard work you have to do for the center, all that pressure. I don’t mean reciting the words, the prayers, I am not talking about that. You can do that very fast, but the meditation on the lamrim doesn’t get done, transforming the mind doesn’t get done, then emotions such as anger and the selfish mind, all these arise more and more, because there is no protection, there is no lamrim meditation. Then, it is very easy to become upset, emotional, it’s easy to get angry, to become kind of egoistic. Then, people clash; there is disharmony and community problems—the problems of two egos clashing. I have seen this in some of the centers in the past.

Therefore, Medicine Buddha is very important, to make everything easy, so you can work with less pressure, so you can meditate on the lamrim, and you have more time to have an easy-going life.