Notes taken during the teachings given by Lama Thubten Zopa Rinpoche at the Third Kopan Meditation Course, October-November 1972, and the Fourth Kopan Meditation Course, March-April, 1973.  These notes sincerely attempt to present Lama Zopa Rinpoche’s comments and explanations given during these meditation courses as he read through the course text, The Wish-fulfilling Golden Sun of the Mahayana Thought Training. Additional notes of a lecture given by Lama Thubten Yeshe during the Fourth Meditation Course are presented in Appendix II. You may also download the entire contents of these teachings as a pdf file. 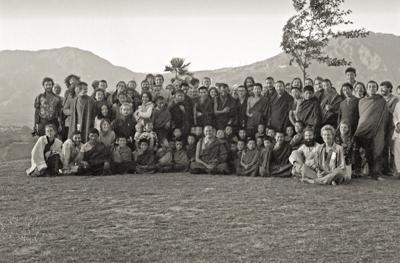 These notes are a somewhat paraphrased version of notes taken at Lama Thubten Zopa Rinpoche's discourses during the Third and Fourth Kopan Meditation Courses, predominantly the latter, by Brian Beresford and Nick Ribush. These discourses mainly consisted of comments and explanations made as Rinpoche read the course text, The Wish-fulfilling Golden Sun of the Mahayana Thought Training. The page numbers referred to herein relate to the work copy of The Wish-fulfilling Golden Sun used at the Fifth and Sixth (March-April, 1974) Meditation Courses.

Unfortunately, it is certain that what has been presented in this book and what was originally meant by Rinpoche resemble each other as closely as earth does sky. This is the result of the infantile clumsiness of those who attempted to interpret his holy speed while taking and rewriting these notes. For this the compilers sincerely apologize and humbly request that the holy guru will overlook these inadequacies and bless this work that it may somehow benefit each and every mother sentient being, bringing immediate release from suffering to all.

This book was first published by the students of the International Mahayana Institute, an organization of Western monks and nuns dedicated to learning and teaching Guru Shakyamuni’s Holy Dharma for the benefit of all beings.

Meditation One (conclusion) and Meditation Two (Parts I and II)

NOTE: Rinpoche did not cover the text past this point.

Appendix One: The Eight Mahayana Precepts