The Suffering of the Lower Realms

Lama Zopa Rinpoche explains the suffering of the lower realms of samsara (cyclic existence) in this teaching excerpted from the Fourth Kopan Meditation Course held at Kopan Monastery, Nepal, in March 1973. Edited by Nicholas Ribush. 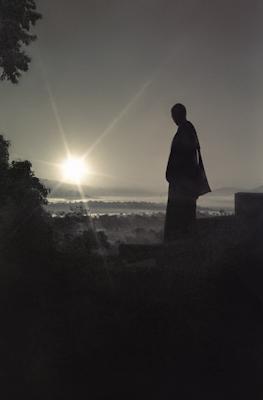 In order to realize the three lower realms, we must fully see the sufferings that exist there. However, at the moment we have no power to perceive these things directly. Therefore we should try to experience those realms through our practice, using the examples shown in the teachings. In this way we can gain the power to see this suffering clearly in our minds.

Even at this moment most beings are suffering in the three lower realms, especially in the narak realms.1 Their suffering has not been created by God or fixed by some other being. It is only a creation of those suffering beings’ minds, just as in a dream we may sometimes suffer in a fire or from all kinds of fearful persons or demons fighting and frightening us.

This is similar to the way that one place can be seen differently by two different people—one may see a clean place while another person may see a dirty place. Although the object is the same, the view varies according to the level of mind, fortune and the karma the being has created. As the mind reaches higher levels, the enjoyments and the visions change and the transcendental awareness and happiness we experience increases more and more.

Each living being’s samsara is a creation of that mind; each living being’s enlightenment is also a mental creation. In a dim room lit by a small candle with a flickering flame, a person without acute perception may see a fearful moving animal or demon, become afraid and perhaps throw something at it. This problem is only the creation of that person’s mind. The person with a calm, relaxed mind, on the other hand, will see what is actually there clearly. All experiences are created by the mind. Similarly, the suffering of the hell being is merely the creation of that suffering being’s mind. Therefore, the choice to experience suffering, to be in a suffering realm, or to be in the perfect peace of enlightenment depends upon the decision of the mind.

Shantideva said, “Without the creator of suffering—the negative mind—who arranges the red-hot ground?”

Guru Shakyamuni said, “No one has arranged the thousands of ways of suffering but one’s own evil mind.”

Firstly, it is important to read page sixty-two2 to see the reasons for meditating on the suffering realms. If we are afraid of paintings of the three lower realms that depict the subjects suffering in different ways, why shouldn’t we fear the actual suffering? If we are afraid of even the temporal physical sufferings that we sometimes experience, why shouldn’t we fear the greater sufferings that exist? The only reason we are not afraid is because we do not remember the beginningless times we suffered in those realms before, due to the intervention of death and rebirth, and to ignorance. We even forget the sufferings from the earlier parts of this life. We don’t remember the suffering of those past countless lives when we were born as these sentient beings, so that means we haven’t yet achieved the complete cessation of suffering. We need the practice of Dharma to stop the cause of suffering.

The main purpose of meditation on the hells is to give us a clearer idea. In the case of the animal realms, we should put ourselves in their place and check up on their sufferings. Think about pigs killed in India, for example. They are put in a sack and stuck in the heart with bamboo, and they scream horribly. Animals have much less freedom than we do—we treat them like they are vegetables, but those who have mind have suffering. Fish are sliced up while they are still alive, maggots are fried alive to be used like popped rice as a Chinese delicacy at big parties. These beings are also sentient beings, with mind.

2 Rinpoche is referring to the second edition of the course text The Wish-fulfilling Golden Sun of the Mahayana Thought Training, produced for the Fourth Kopan Meditation Course held in March 1973.  The correct page reference in the current edition of this text is page 109. The revised edition is available for download as a free PDF. [Return to text]