Illness and Death Are Natural

An excerpt from a teaching given by Lama Yeshe on November 21, 1974, at the Seventh Kopan Meditation Course. Edited by Nicholas Ribush. Published in Mandala magazine, July 2011. 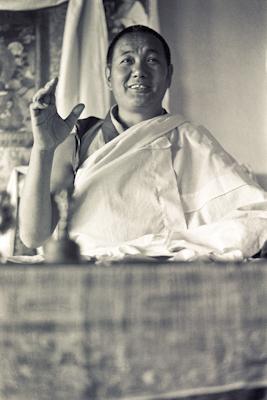 It’s important for Dharma students to understand Lord Buddha’s scientific teachings on impermanence and death and not try to hide from or escape the reality of death. We need to face it. Of course, for people brought up the way they are these days, this topic might be a little bit too much, because in general nobody teaches you about this aspect of reality.

When I talk about death you might think, “Oh, that’s Lama’s thing, not mine,” even though it’s an undeniable fact that illness and death are within you right now. How can you reject your own nature? How can you escape from impermanence and death when you are living immersed in the conditions for them to arise right now?

That’s why I always say that Buddhism is not diplomatic in character. It shows you straight up your own nature. But that doesn’t mean you should cry emotionally, “No! That’s too bad. I’m going to get sick and die. Dying is terrible!” Don’t think in an ordinary way. Do you think that’s wisdom? “Don’t tell me that! I don’t like it!” That’s not wisdom. Check up carefully. Old people don’t like that they’re old so they just push back and deny it. Is that wisdom or not? From my point of view, from Buddhism’s point of view, that’s stupidity and ignorance. Rejecting how old you are; hiding from information about death. And you can’t say that teachings on death are simply an Eastern custom. Is your death an Eastern custom? Has your death been created by Lord Buddha? No. Your death has not been created by Eastern custom, by Lord Buddha or by Buddhism. It’s in your very nature, so how can you reject it?

Saying this doesn’t mean I’m pushing you to get emotional and cry. I’m not. Those who get all emotional and cry, “Oh, that’s too bad,” are demonstrating stupidity, not wisdom. The reason I teach you about the impermanent nature of reality is for you to gain knowledge-wisdom. So check up.

I’m not saying everybody thinks in this way, but this is what I call the street way of thinking; the way common, ordinary people think as they go shopping for ice cream. That way of thinking is stupid. Then there’s trouble. “Lama’s trying to scare me. I don’t want to be scared. I just want to have ice cream and be happy. Tomorrow I’m out of here!”

So check up now. Wisdom is unemotional in nature. Fear of illness, impermanence and death is emotional; that’s why you cry. That’s why you can’t sleep. You think, “I’m going to die tomorrow,” and your stupid, relative emotions pump you up and push you so that you can’t sleep. True understanding wisdom sees illness and death as natural, so there’s no emotional nervousness upon hearing about impermanence and death.

Emotional fear of death is ignorance. We lamas are trying to show you that illness and death are natural and that understanding their inevitability is wisdom. These things that Lama Zopa and I talk about are really simple.

The First Clear Step
The Cycle of Death and Rebirth
Kopan Course No. 07 (1974)
Illness and Death are Natural: Spanish translation