The Cycle of Death and Rebirth

Lama Yeshe discusses cyclic existence in this excerpt from a teaching given during the Seventh Kopan Meditation Course held at Kopan Monastery, Nepal, in November–December 1974. Edited by Nicholas Ribush. 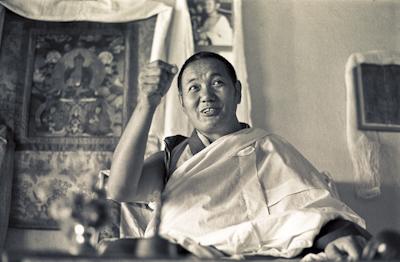 That’s the kind of channel your mind is in now. Because you’re at the mercy of the five aggregates you get agitated. When you’re hungry or thirsty or in pain—all the information that makes you feel those things comes from these five aggregates, from this body. So the aggregates give so much information to your mind, which is in the “uncontrolled-situation” channel. Your own wrong-conception mind clung to this kind of body, and as a result you were born into an uncontrolled condition. You yourself put your mind into this kind of channel. Nobody else did it for you.

Until that uncontrolled energy is exhausted, you have to go through this cycle of death and rebirth. So after death we have an uncontrolled rebirth, maybe in a samsaric realm similar to where we are now. At present we are in a place where we can experience samsaric pleasure, aren’t we? We experience some samsaric happiness in this uncontrolled rebirth. But in another uncontrolled rebirth, we might be reborn as an animal or in what we call hell. But hell doesn’t mean a situation that goes on forever or a place that you can never come back from, which is how Westerners understand it. Hell is not a permanent state. It is also not something outside of us that we have to deal with, such as stones or a jungle. Hell is consciousness. The hell environment manifests from your consciousness, from your negative projection. Thus, the way you feel is your reality. Hell is not a place that is waiting for you, where you go down, down, down. It is also not a place where someone else puts you. When your consciousness is ready, you experience a certain impression from your environment. At that time, for you, hell is existent.

For example, from among all of us who are sitting here in this tent, there are some who feel that this tent is like hell and others who experience a good vibration, perhaps even a sense of bliss. These latter persons who are having a positive experience have clean clear vision and wholesome thoughts rather than an agitated mind. So even among those who are here, some are already in the hell realm. Yes! They’re already in a hell realm.

If you experience this tent as a hell realm, it is your schizophrenic, foggy mental projection that creates that experience. The experience does not arise from your belief. No matter whether you intellectually believe that this is a hell situation or not, for you the experience still comes, doesn’t it? It comes naturally. If you ask someone who is having this experience, “Do you believe this situation is like hell?” they’ll say, “I don’t know. I just know I have this kind of visualization.” They are going to tell you what they feel it’s like rather than what they believe it is. You can see that this kind of suffering doesn’t depend on our believing in it.

The First Clear Step
Illness and Death Are Natural
Kopan Course No. 7