I hope you are well. Thank you for your kind support of the Archive. 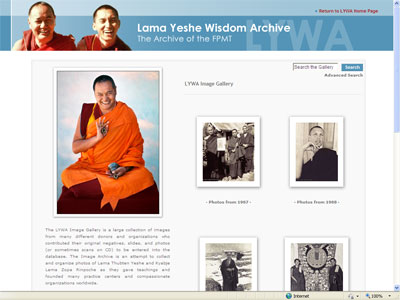 The big news this month is the launch of our online Image Gallery. For several years now we have been collecting old photos of Lama Yeshe and Lama Zopa Rinpoche in order to develop the official FPMT photo archive. We also wanted to make sure we have all the photos we need for our upcoming biography of Lama Yeshe, Big Love, which is also a de facto history of the early years of the FPMT.

The new gallery showcases the very best images from our archive. Each image has been digitally optimized and titles, descriptions and keywords have been added—which are all searchable. Photos can easily be viewed in a slideshow as well. Overall we hope you find the layout clear and easy to use.

We've started by posting albums with the earliest photos in our collection, from 1967 up through 1971, with additional selections from 1975 and more. Each month we will be adding albums that we'll tell you about in our e-letter. The process of creating the online albums includes reviewing all the pictures we have for that time period, weeding out duplicates and cleaning up inconsistencies. While the process can be time-consuming the results speak for themselves.

I have to thank all those kind students all over the world who have sent us their precious photos for scanning. So far we haven’t lost or damaged any! And those who wanted them back have received them in good condition along with a CD of high-resolution scans. Then I have to thank our amazing digital imaging specialist, David Zinn, who has been working hard for all these years taking in the various collections, getting them scanned and developing the database along with LYWA’s similarly amazing IT manager, Jennifer Barlow, without whom the Archive would be... well, I can’t even imagine. So again, thank you all.

If you have photos of Lama Yeshe, Lama Zopa Rinpoche and FPMT centers and activities, especially early ones, and have somehow escaped our net, please let us know. We would love to hear from you. This is an archive—we want everything!

What's New on Our Website
This month's podcast is excerpted from a series of teachings from Lama Zopa Rinpoche titled Living Well, Dying Well, given in Brisbane Australia in 1991. During these teachings Rinpoche spoke about the purpose of life and developing the correct attitude towards death.

We have recently posted excerpts of teachings from the 11th Kopan Course from Kopan Monastery in 1978. You can read a short teaching on Mahayana Thought Training, how renouncing the eight worldly dharmas brings real happiness, a summary of the benefits of taking refuge, and how the unsubdued mind and its action karma are the root of samsara.

Other News
For those of you who are the proud owners of a new iPad, we want to remind you that you can read all of our books that we have published for Kindle by downloading the free Kindle iPad reader. Kindle also has free readers for your iPhone, Blackberry and more.

Also, registration is now open for this year's Light of the Path teachings with Lama Zopa Rinpoche in North Carolina. Details along with important new information about this year's retreat are on Kadampa Center's website.

Thank you again for your interest, and once more we leave you with a previously unpublished teaching by Lama Zopa Rinpoche.


Cheated by the World 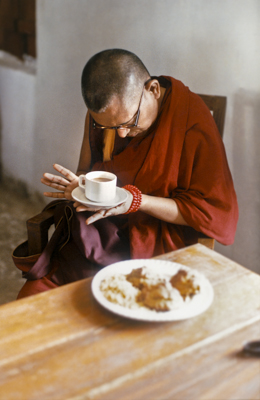 With the wrong conceptions of permanence and true existence, we apprehend things to be permanent and truly existent, and believe in those hallucinations. Things appear to us to be truly existent, and we believe in this appearance, even though what we see has completely to do with our own mind. Our view comes from our own mind. Everything comes from our mind; everything is a creation of our mind. Without the mind there's no view; our view comes from our mind. There is no view of people, places, or anything else without the perceiver--in other words, without the mind, the phenomenon that is clear in nature and able to perceive objects. Without this perceiving, or knowing, mind, there’s no view.

Even though this is the reality, we project something that has nothing to do with the mind, something independent, something with an existence from its own side. And even though phenomena are transitory in nature, we project them as being permanent. When we haven't realized the nature of phenomena or don't practice awareness of it, our mind is invaded by the wrong conceptions of permanence and true existence, which cause us to be caught in hallucinations. We then believe that these hallucinations are real. That is the fundamental problem. On that basis we then give rise to anger and the dissatisfied mind of desire.

I heard the story of one young Japanese man who was dying in America. When he was close to death, he got so angry and upset that the world had cheated him that he broke all the things in his house. From his way of thinking I think he may have been quite intelligent. Not everyone acts in that way. His thought, that the world had cheated him, is not completely correct, but it has some meaning. It makes sense if you relate it to the world that he himself projected, not to the world that exists in mere name. It makes sense in relation to the production of his own hallucinated mind. The problem is that his realization came too late--it happened only when he was close to dying. I think the basic reason he thought the world had cheated him is that he hadn't been told that such a frightening thing would happen.

It's similar to the following verse in Guru Puja:

Please grant me blessings to avoid the thought that sees the unbearable prison of samsara as a beautiful park. By practicing the three higher trainings, the treasure of arya beings, may I uphold the banner of ultimate liberation.1

The term samsara is related to us, to our aggregates, this association of body and mind. We see the unbearable prison of samsara as a beautiful park, which is a hallucination. I think the young Japanese man might have felt cheated by the world in this way. Perhaps he recognized that, distracted and cheated by the world, he had wasted his life.

Another way in which we are cheated is that, while the nature of this body is impure, or dirty, we project that it is clean and believe in that projection. The proof that the body is dirty is that everything that comes out of this body is dirty, even the things that were clean before they went inside. Anything that goes inside the body becomes dirty. The things that come out of this body are untouchable and unattractive. Even though this body is the container of thirty-six dirty things,2 we project that it is clean and then believe in that. Again, this is something that cheats us. In the Japanese man's term, this is another world that cheats us. This appearance of being clean and our believing in it cheat us.

Samsaric pleasure, which is dependent on external things, is only suffering. When one problem stops and another problem has started but is still small, we call it "pleasure." We project the appearance of pleasure and believe in that. That becomes the basis to give rise to the dissatisfied mind of desire. When the fulfillment of our desire is disturbed, anger and other disturbing thoughts then arise. Believing in these hallucinations becomes the foundation for ignorance, anger, attachment, jealousy, pride, and many other harmful thoughts, which then make our life unhappy and make us harm other sentient beings.

We want things to be permanent but it's not the reality. That's the problem. We want something that doesn’t exist, that isn't there. It is unexpectedly seeing the reality that brings shock, fear, and nervous breakdowns. It makes us go crazy. Each moment of the present time, when we look at the self and at other things, everything looks permanent, as if it's going to last a long time. We strongly believe that, until suddenly we find that it's not true, that we have to separate from everything. We have to leave the world, our body, our possessions, and the people around us. When we suddenly come to know this, it comes as a great shock. It's unbearable because we have lived our life with too much belief in the hallucination of permanence, that things are always going to stay the same. I think that’s why the Japanese man thought that the world had cheated him.

Notes
1. This is verse 88 in the lamrim prayer in Lama Chöpa.
2. For details of the thirty-six dirty things, please see page 50 of Liberation in Our Hands: Part Three: The Ultimate Goals by Pabongka Rinpoche. Translated by Khensur Lobsang Tharchin with Artemus Engle. Howell: Mahayana Sutra and Tantra Press, 2001.