The Benefits of Refuge

Kyabje Lama Zopa Rinpoche explained the benefits of taking refuge at the 11th Kopan Course in November 1978. This teaching is an edited excerpt from Session 39, Section Seven of the course. Click here to read more. 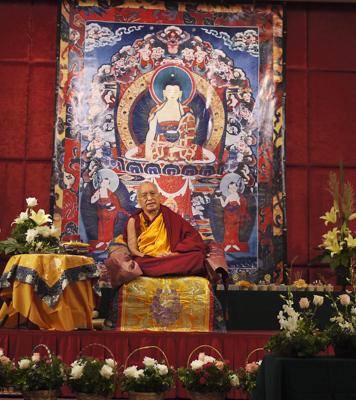 In summary, there are about eight benefits of taking refuge. If we have refuge within our mind, then we have entered the Buddhadharma path and we become an inner being. If there is no refuge within our mind, even if we have memorized hundreds of volumes of Dharma texts, such as the Tengyur, the teachings explained by Buddha, it doesn’t matter. If there is no refuge in our mind, we are not inner beings or Buddhists—even if we have memorized hundreds of volumes of sutra and tantra, and we can recite the texts perfectly from our heart without one single mistake. If there is no refuge and if we have no interest in the Buddhadharma, we are not inner beings— we are outer beings, even if we can explain the entire teachings of Shakyamuni Buddha.

I think I mentioned before that there was a person in India who tried to harm Guru Shakyamuni Buddha all the time. He had memorized so many volumes, including the three divisions of the teachings, and he could say them from the heart without looking at the scriptures, but still he was not an inner being, he was an outer being.

The first benefit of refuge is becoming an inner being. The second benefit is that without refuge in the mind, there is no basis for ordination, and there is no way to take ordination. Five or eight precepts—any ordination, including pratimoksha or bodhisattva ordination—these all depend first on refuge, as the basis of ordination.

There was also a king called Magyeda who killed his father. He achieved the lesser vehicle path, the Hinayana path, the non-returning path, but then he killed his father, who was an Aryan being, and he created the heaviest, uninterrupted negative karma. Right after his death, without any break or taking another rebirth, he would have gone straight to the narak or hell realm, because he had accumulated this negative karma, but he met Guru Shakyamuni Buddha and received teachings and he generated refuge in his mind. As a result of the refuge, all the heavy, negative karma that caused him to be born in the narak, the unimaginable suffering state, was completely purified.

In India or Tibet, I am not sure, there was a monk who had completely broken his 263 precepts. Even the fundamental precepts were completely broken, but he purified this by the practice of refuge. After some time the monk and many others had to go to another place and there was a very big river. The other monks were going by boat, and they didn’t let the monk who had broken the precepts onto the boat. They said he was not pure, but the monk said, “I broke my precepts, but I purified.” The rest of the monks didn’t believe what this monk said—that he had done a lot of practice of refuge and completely purified all his heavy karma. The monk had many signs through dreams that the precepts were purified, and he said, “If you don’t believe me, may I drown in the river.” He jumped into the river and instead of drowning, he was able to reach the other side.

There are many other stories about people who have purified the negative karma that they have accumulated, and had many signs.

1 Angulimala, the famous criminal subdued by the Buddha.  [Return to text]